The KYD First Book Club was established in 2014. Each month we promote a new release debut book of fiction or non-fiction that we’re gunning for everyone to read!

Through a series of events, online content and podcast coverage, the KYD First Book Club encourages wide-ranging and long-lasting conversations about these authors and their books both on and offline. 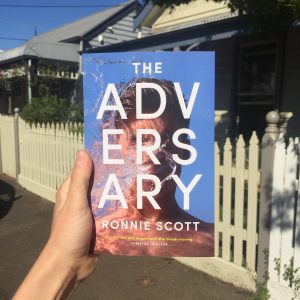 Kill Your Darlings’ First Book Club pick for April is Ronnie Scott’s The Adversary (Penguin Random House), a funny debut novel about sexuality, sociability and sticky summers at the pool.

It’s been a long winter in a creaky house in Brunswick, where a young man has devoted himself to recreational showers, staring at his phone, and speculating on the activities of his best friend and housemate, Dan. But now summer is coming, and Dan has found a boyfriend and a job, so the young man is being pushed out into the world, in search of friendship and love.

The Adversary is an exhilarating debut novel about a summer where everything smells like sunscreen and tastes like beer, but affections and alliances have consequences. It asks what kinds of stories are possible – or desirable – for which kinds of friendships, and what happens when you follow those stories to their natural conclusions.

Stay tuned for features on our website and podcast throughout the month!

Coming up in May: Please Don’t Hug Me by Kay Kerr (Text Publishing).