Shelf Reflection is a monthly series where we delve into the reading habits of interesting Australians. This month’s reflection comes from Native Cats singer-songwriter, electronic  producer and experimental comedian, Chloe Alison Escott.

I’m getting close to the end of Walls Come Tumbling Down, Daniel Rachel’s extraordi
nary oral history of the leftist and anti-racist political movements that sprung up in UK pop music in the 70s and 80s. I avoided all music biographies and documentaries for a few years because they used to make me feel insecure and underaccomplished, but I’m right back into them now. I find reading about artists in other scenes and countries and eras can open up new possibilities in one’s own mind, or at least raise questions about what’s fundamentally different here and now. What would it take for a movement like Rock Against Racism to begin and thrive in Australia today? What could we learn from how it all played out the first time? They went into communities and won over young people who had been led astray by the National Front – why does that approach feel so utterly futile now? Not that those are questions I can answer in any useful way. But if you want to read Meet Me In The Bathroom and ask me ‘who is the Julian Casablancas of the 2018 Australian underground?’, well, make sure you’ve got a few hours free.

I like to have a few non-fiction books, one novel and one short story collection going at once. I used to feel like that was a bad habit, and I still have to be careful that I don’t put the novel aside for so long that I lose the effect of previous chapters when I do finally go forward, but I’ve learned to accept that my emotions and interests and passions vary wildly from day to day and make sure I always have books around to accommodate that. My favourite place to read is in a crowded restaurant at lunchtime on a work day, but I’m trying to read at home in the evenings more often.

My emotions and interests and passions vary wildly from day to day…I always have books around to accommodate that.

What are people surprised to find you enjoy?

20th-century American politics and the Nixon years in particular, that’s my ‘I’m not like other girls’ area of interest. Everyone should have one! Especially if you’re a very self-conscious person, it’s so refreshing to give yourself a break from everyone else’s idea of you, or even just what you expect people would guess about you from looking at you. A few years ago I ordered two books online at around about the same time, Nixonland by Rick Perlstein and Nevada by Imogen Binnie. The latter has an almost mythical reputation for making readers realise they’re trans, and I worry sometimes that this reputation overshadows what a uniquely brilliant novel it is in its own right – but, yes, it absolutely did the notorious thing and woke me up to the fact that I needed to transition. The knowledge was too much for me to handle at the time, so whenever my gender thoughts started to get too hectic I’d just read a chapter or two of Nixonland instead, and feel the visceral humiliation of the Checkers speech, and ponder the shifting fortunes of the Franklins and the Orthogonians, and immerse myself in a world that had nothing to say to me and my own circumstances. Nowadays I’m very much here and thriving and gorgeous but I still dip into The Invisible Bridge (Perlstein’s sequel, covering Nixon’s second term and resignation and the rise of Ronald Reagan) when the mood strikes me.

It’s so refreshing to give yourself a break from everyone else’s idea of you, or even just what you expect people would guess about you.

The PreHistory of The Far Side, by Gary Larson. I bought it when I was 11 because it looked like a big ol’ book of Far Side cartoons, but it turned out to be so much more than that: Larson shows early sketches and compares them to final published versions, writes about cartoons that have provoked complaints and controversy in some way, and fills an entire section, my favourite, with mistakes that he or others have made with his published cartoons. There’s one in which the foreman at a haywire factory is on the phone, reporting disaster and chaos, but one newspaper editor cropped the Acme Haywire sign out to save space; another in which a penguin surrounded by hundreds of other identical penguins sings ‘I just gotta be me’, but a greeting card manufacturer colourised it and made the singing penguin yellow. Pages and pages of the finer points of how jokes work and how easily they can be ruined. That book made me a comedy scholar and I’ve never stopped dissecting the frog since, so to speak.

I feel like this question is intended for a ‘new student at Hogwarts’ type scenario, and it occurs to me now that the Enfield Tennis Academy in Infinite Jest is my Hogwarts, and I might have actually been better off there mental health-wise than I was in my actual real-life teenage years, and no, I don’t know what to ‘do with that’ as such. I’ve just finished Universal Harvester and I may not be well-suited to living in Iowa but John Darnielle is such an empathetic writer and I know he’d do right by me as a character with all the messy interior business that only an omniscient narrator would know about. 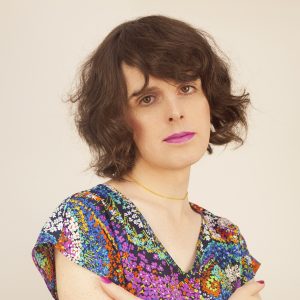 Chloe Alison Escott is an experimental artist based in, and taking the wrong lessons from, Hobart. She’s best known as a hard-edged singer-songwriter (solo and as part of mostly-unclassifiable punk duo the Native Cats) and occasional performer of something that usually starts as standup comedy and takes some wild turns from there, but her reach is still expanding, like an octopus from one of those old anti-Communist posters. 2018 will be one of her years.