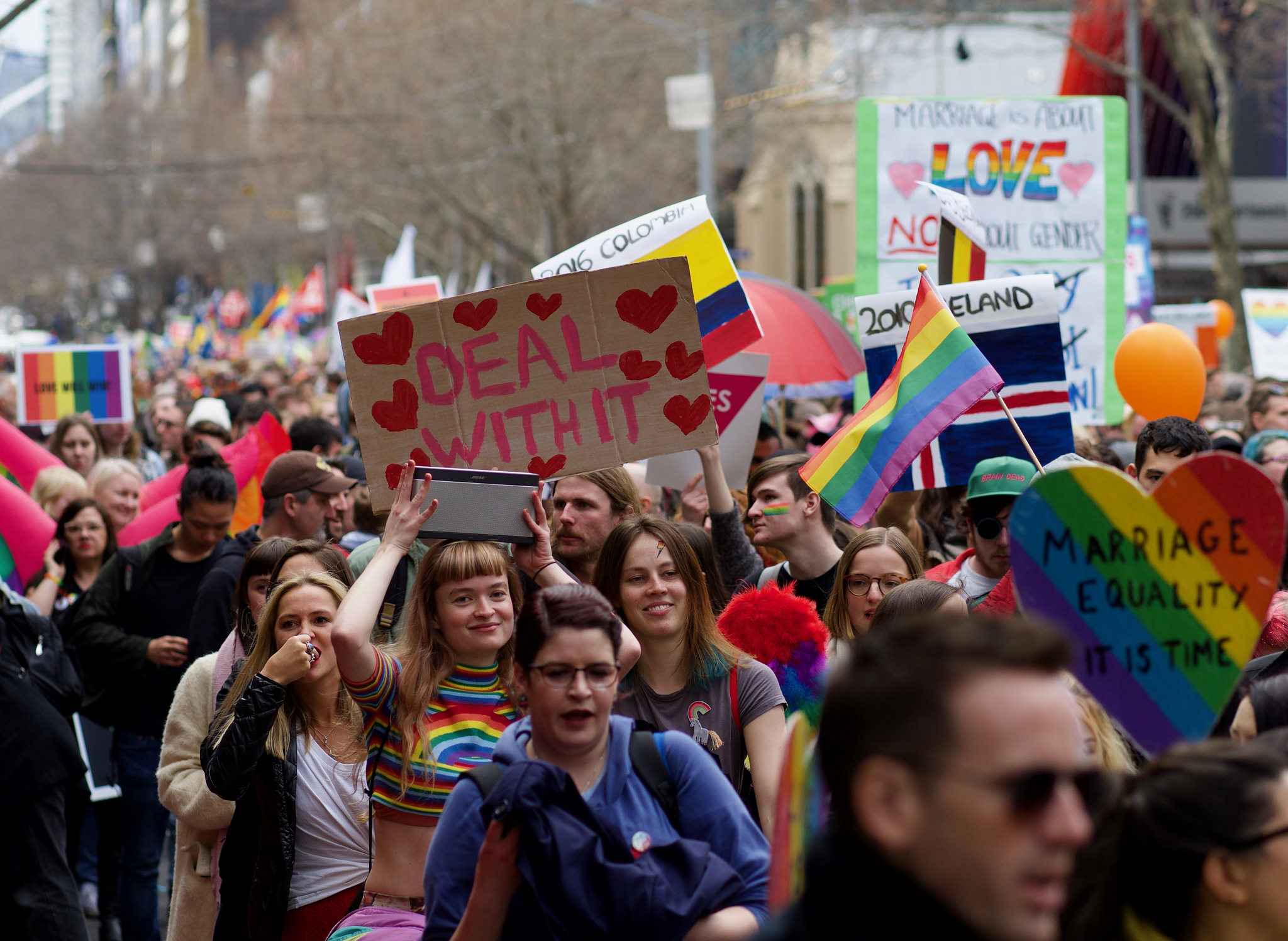 Yes, this is another article about the marriage equality debate in Australia. If you are sick of reading them, just imagine how sick we are of having to write them. I’m writing this particular one because, after the last couple of weeks, I feel completely drained of energy. I’m writing it because every single day I wake up wondering what terrible things will be said about my beautiful community, and our relationships.

I’m writing it because I can’t stop thinking about what it was like as a closeted teenager in Queensland, and how my stomach would drop when any reference to anything queer came up on TV, or in conversation. How my face would burn and my veins fill with ice, looking down and trying to pretend it meant nothing to me. Time slowing down to an unbearable pace as I waited to hear who around me would say something that showed them to be homophobic, someone I couldn’t trust, someone who would give me another reason to stay quiet and hide who I was.

I can’t stop thinking about the kids all around Australia going through this right now – sitting at a dinner table, or listening to the radio in the car driving somewhere with their family. Waiting to have their ‘wrongness’ reinforced as they hear politicians discuss whether same-sex relationships are inferior. Hearing their parents murmur in agreement as people from ‘the other side’ of the debate are given airtime to express their abhorrent views.

It means that a lot of the public narratives we hear from and about the LGBTQI community have been stories framed around sadness, struggle, or inequality.

Indeed, I’ve shared many of my own. I’ve shared stories about growing up and realising I was different; when I was 11 and I identified most with Kristy, the future-lesbian from the Baby-Sitters Club; when instead of obsessing over Devon Sawa in the movie Casper like my friends, I was rewinding to watch Christina Ricci say things in a way I liked.

Instead of thinking about the boys at school, I was thinking of the perfume that my older brother’s girlfriend wore. (It was patchouli, by the way – and to this day I have to avoid Greenpeace volunteers because I will definitely give them all of my money and belongings and clothes and soul if they are nice to me and smell like patchouli – which they always do.)

I’ve spoken a lot about that time, because I felt so lost, and was so confused and scared. I had nothing and nobody to relate to, except my best friend who was a horse that lived in a nearby paddock (but I’m pretty sure she was straight). I’ve written about not having any family members who were like me. Not knowing any queer people at all, or even what being gay really was. What do lesbians even do together? I had no idea. (I still don’t.)

I’ve had to try to figure all of this stuff out while being alone and young and scared. Trying to come to terms with what was happening inside my brain and body, while living in a world where every comment about homosexuality was a negative one. Even after coming to terms with being queer, and knowing who I was, I delayed coming out to my family for literal years – the night I had planned on telling someone, the night I was excited and relieved and finally ready, I heard someone in my family say the word ‘faggot’, and I went back inside myself for a very long time.

I’ve shared the story of the night when I was 19 and kissed a woman for the first time. I was falling in love with her and she was falling in love with me, but later that same night I watched as she lost her nerve and hooked up with a guy in front of me, because that’s what you did. I never saw her again after that night – I am left with only the memory of her telling me she couldn’t do it, she couldn’t risk everything to be with me. Seeing the pain and fear in her eyes, and knowing that for her, the risk of being herself was that she might lose her family. The fear outweighed the pain. I’m told she married a guy a couple of years later, had kids, and still lives in my hometown. Obviously I hope she’s happy and that’s what she really wanted, but homophobia, biphobia, transphobia, all those things – they don’t just cause discrimination, and slurs, and violence. They cause heartbreak.

I started this piece intending to write something that wasn’t framed around the struggle or the hardships that my community faces. I wanted to write about how I think being queer has made me who I am, and how it has given me a life that would not have been the same had I grown up straight where I grew up. A life that I value so much. But I realised while writing this, that all these great things that I love so much about being who I am cannot be separated from the hard parts. The hiding and the adapting and the fear and the homophobia and the sadness and the struggle, that’s all part of it. That’s all part of how I came to be here.

All these great things that I love so much about being who I am cannot be separated from the hard parts.

While it’s obvious that things have progressed for LGBTQI people in a lot of ways since I was young, it’s important for those of us who have been through this already not to unfurl a ‘Mission Accomplished’ rainbow banner just because there were some gay characters on Glee. The mission won’t be accomplished when marriage equality is achieved, either. The challenges queer kids face today are new and different – I can’t imagine what it would be like to be a teenager, trying to figure out what you might become, going through all the othering and the isolation we went through, while also facing all kinds of scrutiny and ‘debate’ around the worthiness of them and their love, every single day.

I am one of the lucky ones. Being queer didn’t kill me, or make me hate myself, or make me settle for a pretend life that I would have been unhappy in. Instead, it set me apart. On one hand, that was extremely difficult. But on the other hand, it set me apart. I knew very early that I was different to everyone I knew. There was something about me that nobody in my family, or my friends, or my community, could understand. I knew almost instinctively that I wasn’t going to be able to have the same sort of life as everyone else. I knew that I couldn’t stay in that conservative small town, if I wanted to find people like me to connect with – and, you know, figure out what lesbians do together.

I knew very early that I was different to everyone else. I knew that I couldn’t stay in that conservative small town, if I wanted to find people like me.

Even though it still took me a long time to fully embrace who I was, from very early on I had to take the small-town blinkers off and look outwards, into the world. Living in a small town can lend itself very easily to an insular, narrow worldview. My family still lives there, my brothers settling down with kids within a blocks of where we grew up. Almost every person I went to school with stayed there in that life, finding someone to marry within a couple of years, settling into that world forever. This is obviously not to look down on their lives, or to suggest they aren’t happy. But early on, I was forced to broaden my mind and look at the world outside that place. Because I had to.

Knowing I was different from so early on helped make me more empathetic to others, and aware of the experiences and hardships that people with different struggles might face. It forced me to explore, and escape to find my community. The hard parts gave me perspective.

After being isolated and alone for so long, the sense of belonging that you feel when you connect with groups of queer people and allies is indescribable. When I think of it even now, it can take my breath away. So many of the people in our community over the years have found it necessary to leave behind a family that didn’t want them, or didn’t understand them. They’ve chosen their own family, built from a community of people who embraced them. And that’s our responsibility now, to make sure young LGBTQI people know that we are here and we are fighting for them. That no matter what terrible things they hear and what they experience, that they will always have a place with us. That we choose them.

The tiredness I feel now is not based on whether or not we achieve marriage equality. The fight happening now is not simply about who can or can’t get married. It’s about being forced into a position where we have to demand equal rights, instead of having them by default. When we are forced into this fight, the other side comes out swinging, trying their best to dehumanize us, to convince everyone that there is something wrong with us. It’s the responsibility of the heterosexual community, people who pay lip service as allies, to now take practical action to support us. And it is our job as members of the LBGTQI community to protect the most vulnerable in our community – the trans kids, the Indigenous kids – and to show them that not only is it okay to be who they are, but that one day they will hopefully see it as a blessing and a joy.

It’s about being forced into a position where we have to demand equal rights, instead of having them by default.

The hard years I went through give me a desire to make it easier for the next generation to find their place more quickly, to find their people, and to start living their best life as soon as they can. To help them realise that maybe being queer will actually end up saving them, and might just be the best thing that ever happened to them. What I have now is what I want for them: a life full of love and friends who have gone through very different experiences, but who have managed to end up happy, and okay, and here. And queer. Get used to it.