For the working class, interwar Sydney was a city of muck, work and danger. Carnivals chattered with all manner of untoward folk, tile-walled pubs were hosed down after the swill of drunk husbands went home, and dirt streets stood simmering with rumour and gossip. In Siren Theatre Company’s The Trouble With Harry, which played in Sydney for the Mardi Gras Festival in February and March (after productions by other companies in Belfast and Melbourne), Lachlan Philpott paints this vivid picture of a grimy city, and it’s in this world that we find the titular Harry Crawford (Jodie Le Vesconte) – husband, father, and as yet unbeknownst to the world, transgender man.

Under the direction of Kate Gaul, The Trouble With Harry shines a spotlight on a household in many ways like any other, simply struggling to get by. Following a death in the family, Harry’s daughter Josephine (Bobbie-Jean Henning) arrives to live with him, his wife Annie (Jane Phegan) and son-in-law (also named Harry, played by Jonas Thomson). Tensions rise in this new domestic dynamic, and the concealed is unearthed and eventually made catastrophically public, amidst a two-person chorus (Niki Owen and Thomas Campbell) who beautifully fill out an ensemble of eavesdropping neighbours and hushed communal whispers. As characters unhinge and secrets unravel, the thin, shifting veils that drape the small raised stage start to feel claustrophobic, and we become voyeurs into the ensuing spiralling tragedy; the breakdown of Harry’s family, his public outing at the hands of Josephine, the death of Annie, and his subsequent trial for her murder.

The Trouble With Harry is based upon the real-life Harry Crawford of 1920s Sydney, and the media circus that followed his outing after the death of his wife, and ‘the famous man-woman’ trial that ensued (he pleaded not guilty, but was convicted and served time until his old age). In researching for this play it would become clear how acrimonious the narrative around Crawford was, and how his identity was at the time a shorthand for deviancy. Indeed, so hostile was the public opinion against him that the immorality of his having convincingly appearing as a cisgender man was placed as equally scandalous to his possibly having committed murder.

Certainly, the Harry Crawford presented onstage in Siren’s production is given far more life, humour and empathy than perhaps any previous account of his character. But for a story so intrinsically concerned with the theme of hiding, his identity is still presented to the audience as a revelation and an unveiling, no better than journalists in the courtroom. Given the scope and darkness of the subject material, the play does occasionally find moments of clarity and truth, but too often fails to comprehensively back them up.

It’s disappointing to watch accomplished actors work with unsure material, and even moreso to see them appear entirely unaware of the community they’re portraying. While the work represents a brief foray into trans identity and history, it feels stale and short sighted, short of any real depth of perception. As the play reaches its climax, Le Vesconte’s brooding Harry yells at his collapsing family, his words loaded with pain and betrayal, ‘you think this is a choice?’ But the script and the production around him don’t resonate with that truth, like they aren’t completely sure it’s not.

The portrayal of transgender people and their stories in art is not a new discussion. Films have long vied to tell salacious stories of gender’s miscreants and outlaws as a parable of the unknown other, much of which has sought condemnation since. Even in light of a modern movement of far more positive, empathetic trans stories finding their way onto our pages and screens, some of even the most well intentioned creators have in more recent years come to admit their mistakes.

Films have long vied to tell salacious stories of gender’s miscreants and outlaws as a parable of the unknown other.

During a Q&A after the play, the creators of The Trouble With Harry were asked about the importance of casting transgender actors in trans-themed productions. One of the cast members (who consistently misgendered Crawford while talking about him) responded, ‘but that’s why I’m an actor’ – implying that their training and craft were implicitly enough to interpret the identities they’d indicated great ignorance of moments earlier. In the same session, the writer talked at length about his research and consultation process, of the communities he’d spoken with and the work he’d done to represent them fairly. Despite this, he then admitted ‘it’s the theatre, it can’t always be what we hope to see in the world’ – a concession of trying, but maybe not quite succeeding. I simply don’t believe this is good enough. Art exists in many ways to reflect the world, but also to comment upon it and shape it.

Jill Soloway, creator of the Emmy winning Transparent, in which cisgender man Jeffrey Tambor plays transgender woman Maura, initially defended her choice of lead for the show; Tambor had felt like the ideal casting for a character based upon her own lived experience with a transgender parent. However, as the show increasingly saw success, it also drew criticism for his portrayal and her defence of it.

In many instances, when the trans community calls out media for being ill thought out, or in some cases openly transphobic, the response is to come down even harder, trying to stifle any kind of conversation. However, during press for the third season, Soloway said in an interview, ‘I would unequivocally say it is absolutely unacceptable to cast a cis man in the role of a trans woman’, entirely reversing her position. ‘Find an actor who is at that point in their transition. Or don’t tell the story. I just don’t know if it’s the place of a cis [person] to be attempting to investigate how it feels to be trans’. It is no coincidence that the second and third seasons of Transparent have increasingly been produced with trans consultation and collaboration.

This is not to say it’s not difficult to tell complex historical stories detailing the lives of those whose identities we’ve only had terminology for more recently. But Harry the character is now made to confront his history not by the sinister world at large but by his cisgender writer, director and cast.

In one scene, Harry scrutinises a newly-bought hen, and (correctly) declares that it is in fact a rooster – ‘it’s in the eyes’. As a metaphor for determining gender, this scene doesn’t occur in a vacuum. Neither does a scene where he talks about an assault experience at the hands of an employer, therefore revealing a previously only alluded to genital configuration. Nor does the inexplicable ending of the play – Harry forced to wear a dress at his trial, ashen-faced and defeated, the chorus chanting ‘it, it, it’ on either side of him until the final blackout.

It’s these sorts of scenes that betray any potential good intentions of this production, and many others like it. What may be intended to point out pivotal moments in a character’s life reads, to a trans audience, like Crawford is being played for an ignorant spectacle. Art containing trans people is labelled as inherently transgressive because of our relatively recent public attention, playing out tired stereotypes that we’re simply perverts and deviants, that we simultaneously destroy and validate the gender binary (both bad), and especially that we’re not to be trusted.

There isn’t a hard checklist for how to not screw up when telling these stories, but surely a start would be abandoning the misconception that transgender identities are performative. That’s not even to say that Crawford himself necessarily must be played by a trans man (though that would certainly be a marked improvement), but that the total lack of direct transgender involvement is visible in every moment on stage, and instead of an aftertaste of curiosity, I’m left holding down my pre-show meal, having seen the violence my community and I experience every day played out without purpose or nuance.

The inherent problem found in productions that tell transgender narratives not themselves helmed by trans creators is that they often miss the point of the story they’re telling. Instead of affirming Crawford’s identity in a world made more vague by it, Gaul, Le Vesconte and the wider ensemble bring us a story of a definite murder committed by an indefinite man. This is especially dismaying in light of the promotional material capitalising on his trans-ness, only to bring it into question once the stage was lit.

The framing of a framed man by anything other than his maleness lets the production (and the queer community as a whole) down, and fails to redeem both the strength of the cast and the many truly beautiful visual aspects of the production, to its detriment. The Trouble With Harry paints a picture of a world that was, and hides ignorance and unsure footing behind the retelling of tired history, rather than stepping out and showing hope, presenting a world that very well could be. 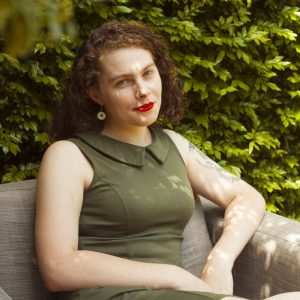