It took me a long time to stop asking art to tell my story.

To stop hoping to see my story on stage or in books or on film. To stop waiting for that one artist who could reflect back the minutiae of what I was feeling. To stop thinking I would finally pick up that book, sit in that theatre, and have someone say: here it is; I know what your life is like, too. Even if only for an hour. Just to feel seen.

My life, like most, has been both messy and banal; there have been moments of great joy and moments of great grief. It has no overlying narrative arc, no lessons to be learnt. There isn’t a theatre show in there, waiting to be seen.

So I learnt: I wouldn’t find my story in a stand-alone piece of art. Instead, I now know to find it in fragments, in characters or scenes or lines that butt up against the edges of my life; the edges of growing up as the sibling of someone with multiple disabilities; the edges of travelling through extreme grief.

I’ve devoured Janice Galloway’s The Trick Is To Keep Breathing, spending time with a woman grieving over the death of her lover; sunk into the poetry of Pooka Nansi in Love is an Empty Barstool, finding familiarity in Nansi’s grief over a broken relationship and a broken heart. I’ve cried with siblings – with Haddie in Parenthood, with the girl in A Girl is a Half-formed thing. I’ve sung along with Young Jean Lee’s We’re Gonna Die; breathed deeply and quietly while lying on the dirt in Tania El Khoury’s Gardens Speak.

And through some combination of these almost-but-not-quites, these perhaps-but-not-reallys, I can start to put myself together and understand my place in the world.

I sometimes think, more than anything, this is what keeps me going back to the theatre: to try and figure myself out in a semi-public forum, in a way which isn’t simply introspective and individual, but reaches out into the world beyond. Through the act of witnessing shared stories I am able to pull parts of myself back into focus, or perhaps be reminded of things I once thought or once was, but remember no longer.

I think this is what keeps me going back to the theatre: to try and figure myself out in a semi-public forum.

Sometimes, these moments of revealed memory are gentle. They brush against me and bury into my skin, perhaps only unfurling in the days after I walk out of the theatre. But sometimes they hit me like a punch in the gut. They hit me while sitting in a tent in a park in Adelaide, watching We Live by the Sea by the young British theatre company Patch of Blue. It’s the story of Katy (Alex Brain), a 15-year-old girl with autism, and her 19-year-old sister Hannah (Alex Simonet). Their father died the year before, and their mother left when Katy was diagnosed, leaving Hannah as Katy’s carer. Together, they’ve settled into a rhythm with which they can see each other through the days and the weeks. Fish fingers for tea; trips to the beach on the weekend. Sisters and friends, with all the love and conflict that entails.

And then in this tent I remember the absolute fear that I lived with during the last three years of my sister’s life: that our parents would die, and I would be left as her primary carer. I was scared that my capacity for love was finite, and that one day it would run out.

Time and grief play with your memories and your emotions – distorting them, smoothing them down, hiding them altogether. I had forgotten this terror, this belief that I wouldn’t be strong enough to carry on alone; the overwhelming sadness that came with it. There is a terrible discordance in the fact that it took the overwhelming pain of grief for me to see how deep love truly runs.

We Live By The Sea isn’t my story. It’s nothing like my story. But it joins my life at the edges, just a little, stitching something of me together. For some in this audience, their experience will be of this: a reminder, or a reflection. For others, the artists ask them to sit for an hour, to spend time with a story and a family they haven’t seen before, to perhaps expand their understanding of the world. And as I watch, I feel the old fear rush back into every inch of my body. 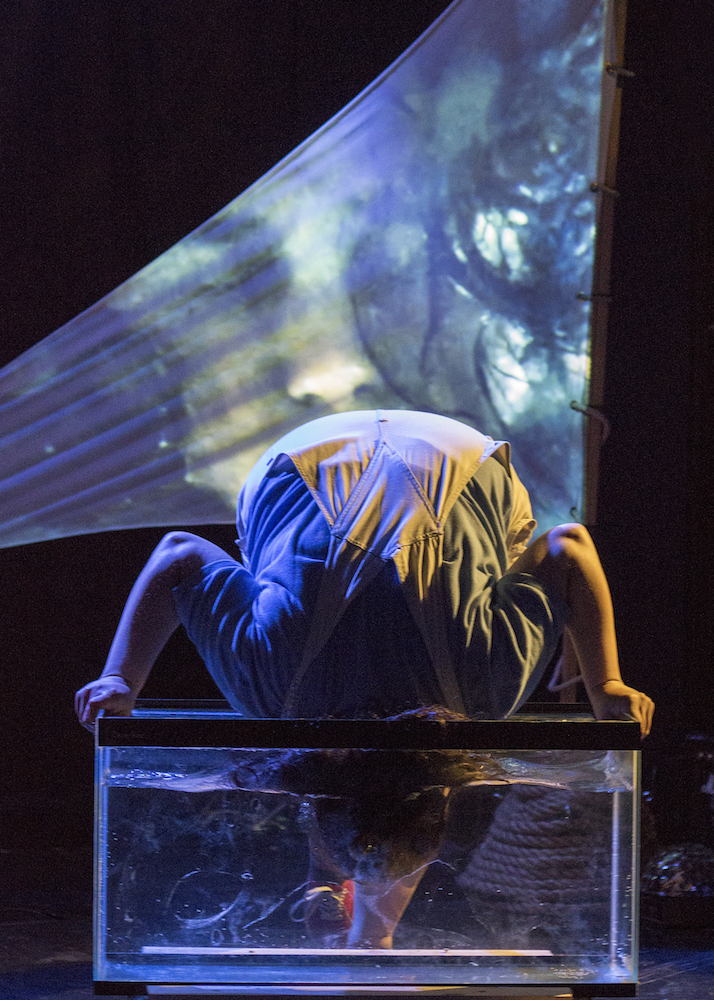 Katy struggles with many parts of the world. Her rituals are rigid: she brushes her teeth with the purple toothbrush for three minutes because that’s how long the dentist said to brush your teeth for, and dentists don’t lie; she touches the shoes of strangers before she talks to them – three taps on each foot and then she knows it will be okay. Her world is loud: the sound of the live band rises on stage; light globes flicker; home-video of the beach airs at the back of the stage. Katy’s imaginary best friend, a dog named Paul Williams (Lizzy Grace) endlessly chatters: a bounding consciousness that demands to be kept pace with, she is also Katy’s closest and most private support mechanism. Katy’s world expands out from the stage and into the theatre around us, into our brains: it is a brash and multisensory echoing of autism, at times threatening to overwhelm, before the creative team tenderly bring us back to quiet.

Like all lives, we’re not let into a grand narrative: it is that everyday combination of messy and banal, filled with joy and grief.

Katy is kind and gentle and imaginative. She loves Paul Williams, and her sister, and the sea, but she is lonely, teased by the kids at school  – until Ryan (Tom Colliandris) moves to town and, struggling with his own grief, finds comfort and friendship in these sisters and their world so unlike his own.

Devised with the cast, directed by Alex Howarth and created with the support of the National Autistic Society in the UK, We Live By The Sea delicately looks at Katy’s life. Like all lives, we’re not let into a grand narrative: it is that everyday combination of messy and banal, filled with joy and grief. Katy has grand adventures in her imagination, telling stories of knights and princesses; she goes to school and tries to build up the courage to deliver a presentation to her class. Brain’s performance is careful as she steps into the role of someone with autism. Wide-eyed and big-hearted, her mouth curls into an impossibly large grin; her hands grasp for objects which can’t be seen; she hits herself in pain. Brain’s Katy isn’t a hero, she’s just a girl, with all of the complexities that contains, and some more besides. Her story is treated with respect; her love of herself, her family and her friends always present.

The cast are careful to centre Katy’s story and her view of the world, but it is Hannah’s story I keep watching. Simonet’s performance is all tired eyes and scrunched up limbs. Her shoes are slip-on flats, easy to take on and off, and her feet often hit the floor bare – no shoes for Katy to touch. They are close enough and dependent enough on each other that their relationship doesn’t need shoe taps to create safety and peace. Her hands often find their way into her jeans pockets: perhaps making herself small in a world Katy often finds too big and overwhelming, or perhaps just finding a way to be within herself. As Katy excitedly talks, and Paul Williams excitedly frolics and commentates alongside, and the music of the band grows, Hannah is often left quiet. Her space is to be there for Katy. It is sometimes difficult but always necessary, and in the necessity she finds ways to get through those difficult times.

Katy and Ryan and Hannah find comfort in each other’s silences, in the ability to just be.

And then, all of a sudden, there is Ryan – the tall boy who left the city after the death of his friend. Colliandris’ character is awkward and uncomfortable at first, but curious and kind, discovering this family at the same time as the audience. With someone else on her team, Hannah can again start to find herself, quietly, always with one loving eye towards her sister.

Katy and Ryan and Hannah never quite tell each other how grief wells up in their lives, how lonely they have been, but they find comfort in each other’s silences, in the ability to just be. In the ability to be with others who know what you feel, even if just little. Not because someone can say, ‘I know what you’re going through’, but because someone can say, ‘I don’t know what you’re going through, but I know that I don’t know. And I know that it hurts.’

Our lives are messy and complex and borne of so many different factors. What can it possibly mean to wish things had turned out differently, when you can’t know who else you might’ve been? The good and the bad factors intermingle in our lives, often with no real start and no real end, and nothing to tease them apart. To take away the bits of a life that made you hurt might also mean to take away the beauty and strength that grew in their place. And yet there are many things I’d take away, if I could.

The more I understand this tangle that makes a life, the more I find myself at ease with looking at art not to see a mirror of my experience, but to see the bits of my life ensnarled within the stories of others. Showing me the mess of the world as it is. I find comfort, now, in these stories which are almost-but-not-quites, these perhaps-but-not-reallys, the stories that sit alongside my own, for even just a moment. Those stories that not only say ‘I see you’, but continue on the conversation and say, ‘Have you seen this part of someone else’s story, too?’

We Live By The Sea by Patch of Blue is at the Royal Croquet Club for the Adelaide Fringe until March 19.