Footscray, 6am. I could be in bed, warm, and asleep, but instead I’m skipping on the firm turf of a local soccer field. In the sky, clouds are beginning to take shape, edges glowing orange, bulbous black mounds promising rain. Squats, burpees and a whole day of work await. But I am ready for what comes next.

Often, when I tell people about my early morning exercise routine, their eyes widen in disbelief. ‘You must be really disciplined,’ some say. Others shake their heads and tell me that getting up early to work out is simply too hard, or that they prefer hitting the gym at night. Boxkick sessions at sunrise definitely are not for everyone – but this talk of ‘discipline’ makes me think of Gunnery Sergeant Hartman, the drill instructor in Stanley Kubrick’s Vietnam War film Full Metal Jacket – a loudmouth disciplinarian, screaming at his troops in training, ordering them to run harder, do more push ups and climb faster, day in, day out.

For me, Hartman represents the pointy end of how strict authority shapes the habits of minds and bodies – for good and bad. The drill sergeant transforms Joker, Cowboy, Snowball and the other marines into hardened and skilful soldiers. But his approach comes at a horrible cost – an overweight and struggling recruit, sanity and spirit broken by Hartman’s wrath, shoots his drill instructor dead.

Other pop-culture depictions of punitive exercise routines have similarly nasty consequences. The gridiron players of Oliver Stone’s Any Given Sunday bang and crash their way across the field, putting their bodies on the line – their families, and hefty pay cheques, depend on their playing well. Pai Mei, the misogynist kung fu master of Quentin Tarantino’s Kill Bill Volume 2, renowned for his torturous training regime of punching blocks of wood with bare hands until they bleed, ends up poisoned by a vengeful apprentice.

I’m not afraid of the effort it takes to work up a sweat, but the promise of pain rarely encourages me to move more.

These consequences are apparently forgotten when punitive and violent depictions of physical activity trickle down from the cinema to magazines and advertisements for health and fitness – not to mention reality television. ‘Fast bodyweight workouts that are so intense, they rip away body fat!’ declares an online promotion for the RIPTENSITY fitness program. ‘Why You Should “Smash” Your Hips With a Lacrosse Ball For 10 Minutes Today,’ says an article on improving hip mobility. ‘I’ve got you guys in my sights,’ Steve ‘Commando’ Willis menaces, his arms forming a pretend rifle aimed at a family competing in Channel Ten’s The Biggest Loser. It’s a philosophy that finds its absurd manifestation in Ben Stiller’s fitness guru and gym owner White Goodman in Dodgeball – a man who subjects his body to electric shocks while tempting himself with donuts, living by his belief that being ugly is ‘only your fault if you don’t hate yourself enough to do something about it’. I’m not afraid of the effort it takes to work up a sweat, but the promise of pain rarely encourages me to move more.

To be fair, these media are not just sound bites of impending suffering. As a video on The Biggest Loser’s website loads, a short advertisement for porridge plays, its voiceover emphasising the importance of daily balance, and nourishing the body. And I like the idea of family members supporting each other during an attempt to manage their exercise and diet better. It feels mawkish at the time, but I tend to identify more with these positive messages. But one of the major problems with the show is its overarching narrative – that of contestants attempting to lose the highest percentage of their body weight. This frame of competition, one in which people are pushed to out-do each other, doesn’t promote a supportive culture for managing health, and significantly undercuts any positive messaging. The Biggest Loser may be attempting to change tack in 2017, but I doubt I’ll be watching.

Lifestyle reporter Sarah Berry writes similarly about exercise, noting that it is the enjoyment of physical activity, rather than discipline or knowledge of its health benefits, is what motivates her to keep moving. She prefers to focus on the joy experienced through bodily movement and a chance to play. Taking a more existential perspective, writer and philosopher Damon Young enjoys the heightened feeling of being alive that comes with exercise, and as part of this, making the most of his body before it’s too late. Enjoying exercise as a form of motivation is, to a degree, a reflection of the financial, social and physical privileges these writers and others have to manage their health. However, this idea can manifest itself in different ways. For example, many Australian participants in a stroke rehabilitation program reported that its regular exercise component increased their strength, endurance and ability to complete everyday activities. Young refugees in sporting clubs negotiate different ways of belonging, those ties to ethnicity, language, geography and religion that shape how well they and other Australians feel that they are welcomed and part of the community.

Enjoying exercise as a form of motivation is, to a degree, a reflection of financial, social and physical privileges.

For me, focusing on the positive aspects of exercise for motivation is only one part of the picture – and motivation can easily lessen on a cold and wet Melbourne day. According to my September exercise group report, I have completed 149 training sessions over the course of one year – about three sessions a week. My average rate of attendance has remained roughly the same during the shitty weather. What I think has helped keep me exercising is a combination of early morning routine, and, in my head, increasing the self-talk on ‘balance’.

In The Karate Kid (1984), the handy man and martial arts teacher Miyagi tells Daniel, his talented but troubled teenage student, ‘Balance is key. Balance good, karate good. Everything good. Balance bad, better pack up, go home. Understand?’ I have never raised my fists in a dojo, but when I frame my thinking like Miyagi in terms of balance, I tend to see things that are positive, negative and everything in-between – including for my exercise. Maybe I’ve simply watched too many movies, but I’m increasingly using it as a practical technique to help pull off the doona on a cold morning, and when I’m on the exercise field.

So as my arms tremble and my triceps burn as I push a pair of ten-kilogram dumbbells, I try to root myself physically and mentally in the moment, and glimpse a bigger picture: there is muscle pain at first, but then pride as I keep going, relief when I near the end of a set, and joy after dropping the weights on the ground, finished. I am grateful and alive.

I know I think too much. The basic conditions of my life (a steady job, decent education, good housing) are excellent, and made it easier to learn an early morning exercise routine in the warmer months, and maintain it during the year. This skill, while requiring practice (and a bloody loud alarm) feels almost automatic now, helping me pull on my runners in the morning without thinking. Indeed, scientists have found that habits, as well as beliefs, control exercise.

When I watch the Karate Kid now, what I notice most are Daniel’s habits. His regular training, which is often woven into daily chores and activities, grounds and sustains him – from the sanding of garden paths and fences, to polishing his car and painting his garage. These are, of course, physical activities that develop his defensive blocks and other karate techniques, improving his skill for combat. But they also provide him with a sense of balance, physically and emotionally. In turn, Daniel’s training helps grow his relationship with Miyagi, give him the confidence to face his bullies, and enjoy a budding romance. Here, the approach to exercise is not depicted as punitive, nor is it overly positive. Rather, it is a routine that enriches Daniel’s daily life. It’s a useful point of comparison with my own exercise habits, and for seeing how exercise can become part of, and not separate from, my work, writing, relationships and social experiences.

For now, as the days become lighter and longer, I know that it is not a slavish adherence to discipline that helps me pull on my runners when the rain thunders on my roof, nor a faith in only what is fun. What I enjoy and rely on is knowing that I can train my mind and body to remain steady, and to roll with the pain and pleasure of exercise – and life – when the weather is warm, and when it is at its worst. 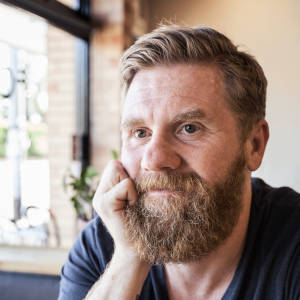 Ben O’Mara is a writer and health worker from Melbourne’s west. His stories have been published in The Guardian, The Age, Eureka Street, ABC The Drum and Meanjin. He is researching his first book of non-fiction, 'Smellbourne', which explores what Melbourne means to its residents through their sense of smell.