The idea came in a jolt at 3am as I scrunched deeper beneath the covers, desperate for sleep but wondering if it was too late to bother.
‘You should rewrite your book.’
Shut up, brain, it’s 3am. My book is almost finished. Go to sleep.
‘You have to rewrite your book.’
No brain, no. I can’t.
‘You gotta. Here’s all the ways how.’

I did not sleep. Brain was right. I had to rewrite my second book.

I wrote my first book in a well-timed bout of unemployment in late spring, my first in Melbourne, and everything was golden sunlight word counts, cider and typing in the afternoons, the story pouring from my body and onto the screen. It grew from a short story into a novella in a flurry of my weird, three-fingered typing, an embarrassing remnant of my beginnings on a typewriter. Six weeks. I had a deadline, a novella competition. I got it in just in time, and then I won it. Seven months later I had a book (a small book, but still) in my hands. My road to publication is not the usual path, but I’ve never been one to do things the ‘normal’ way. It just kinda happened. Like I tripped and fell into it.

My won a big, scary literary award, somehow. It was nominated for a few more. And people liked it, and rated it and everyone was like, ‘more, we want more!’

The sequel I’d plodded away on, no pressure, just write, took on a new gravitas. It stopped being just a continuation of the little character I’d thought up, and became my Second Book. And that’s when shit got real.

Athletes get ‘sophomore slump’. Bands flop or break up over their ‘difficult second album’. And it turns out, some authors get wracked with worry about making their second book. Donna Tartt waited a decade to write her second novel, and she’s Donna bloody Tartt! Zadie Smith battled writers block between White Teeth and The Autograph Man. Were these cases of second book syndrome? I mean, shit, did Alex Garland ever top The Beach? I’m no Smith, Garland, or Tartt (though some may beg to differ – see what I did there?), but my little antipodean-dystopian potential-franchise is important to me.

The problem with a second novel is that it takes almost no time to write compared with a first novel. If I write my first novel in a month at the age of 23 and my second novel takes me two years, which one have I written more quickly?  The second, of course.  The first took 23 years and contains all the experience, pain, stored-up artistry, anger, love, hope, comic invention and despair of a lifetime. The second is an act of professional writing. That is why it is so much more difficult.

The first time around, the only person you’re accountable to – if you write, if you don’t write, if you spend an entire day in your pyjamas watching Fringe – is yourself. But, if by some miracle, your writing gets out there, and then, through luck and chance and talent and a perfect storm of right-place-right-time, it does well, then the layers of accountability pile up and up, and there are publishers and well-wishers and readers who are depending on you and waiting for your stuff.

Even if you can cope with that kind of pressure, there’s a whole different kind of demand, not just for the thing to be written, but for it to Actually Be Good. What about all those awards you won, and all those people who said your writing was powerful and important and rad? Is this new thing even rad at all?

I’m ridiculously worried that my second book will not be as important, or fast-paced, or well-plotted, or with as many clever allusions to this and that, which I totally meant to put in, I swear, they were completely on purpose. I’ve got people who love this character, and I don’t just owe it to her or myself to make her story as good as it can be; I owe it to them. Before, I had friends and cheerleaders to whom I’d send scratchy Word docs late in the night, asking, is this okay? Now I have readers. People I don’t even know care about what I do with this thing.

I’m not the only one. Anna Spargo-Ryan, whose first book The Paper House (Picador) was recently released, is also in the midst of writing her second book. She told me:

I feel like I learned a great deal from writing my first book, so parts of [book two] have been easier. Like, I feel better equipped to deal with pace and structure in particular. But a big part of me also wonders if I can write anything that’s distinct enough from the first book. Are people going to accuse me of writing the same book over and over, a la Nicholas Sparks? And then, the more books I write, the less ‘amateurness’ will be excusable. What if I don’t learn fast enough? I feel like telling people to bear with my first book, because I learned so much from it and the next one will be better, like I was just warming up! But then if [book two] is also just a warm-up, will they still tolerate its many flaws? The good news is, that seems to be pretty standard. Doesn’t it bring you such great comfort to know that everyone is torturing themselves? What a relief.

Maybe some self-doubt is healthy. I don’t think I’d trust anyone who had complete and utter faith in themselves. ‘If you stopped feeling self-doubt,’ Anna says, ‘maybe you’d stop improving too.’ I’ve always believed that writers need to have confidence and doubt in equal measure, and the trick of being a writer is in finding that healthy balance. Worrying about my book being ‘good’ has pushed me to work, really bloody hard, to get it to a point where it is as good as I can make it.

In the end, I guess, it all comes down to doing your best, and trying not to let the pressure of living up to impossible expectations (your own, or anyone else’s) get in the way of that. It can feel like there’s some kind of countdown timer – I gotta get this done before readers and publishers and the LIT SCENE all forget about me – but whatever the pressures, a book takes as long as it takes.

When this book comes out I’ll remember the battles I’ve had whipping it into shape. I’ll have researched and worked and shaped it to the best of my abilities with my heart and my hands and my stupid three-fingered typing. And maybe it won’t be nominated for this or that, or win a big award or like the first one, but I put my everything into it. And maybe that’s okay, and enough.

When my brain, late that night, said ‘your second book could be better but you’re gonna have to work,’ I didn’t just pull my pillow over my head, even though I really fucking wanted to. I took my almost-completed manuscript à deux and gutted it. I knew it could be better.

Maybe that pressure to live up to the first was good for something. 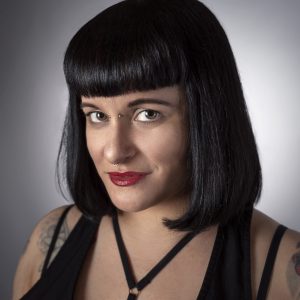 Marlee Jane Ward is a writer living and working on unceded Wurundjeri Land in Melbourne, Australia. She is the author of the award-winning Orphancorp Trilogy, the first of which won the Viva La Novella Prize and a Victorian Premiers Literary Award. Her work can be found in Terraform, Apex, Interfictions, Aurealis, Overland, Scum Mag, Meanjin, and more. Her memoir Money for Something is written under the name Mia Walsch and was published through Echo in 2020. She is proudly neurodivergent and currently living her dream of being an apocalypse witch and someone’s fabulous goth aunt.