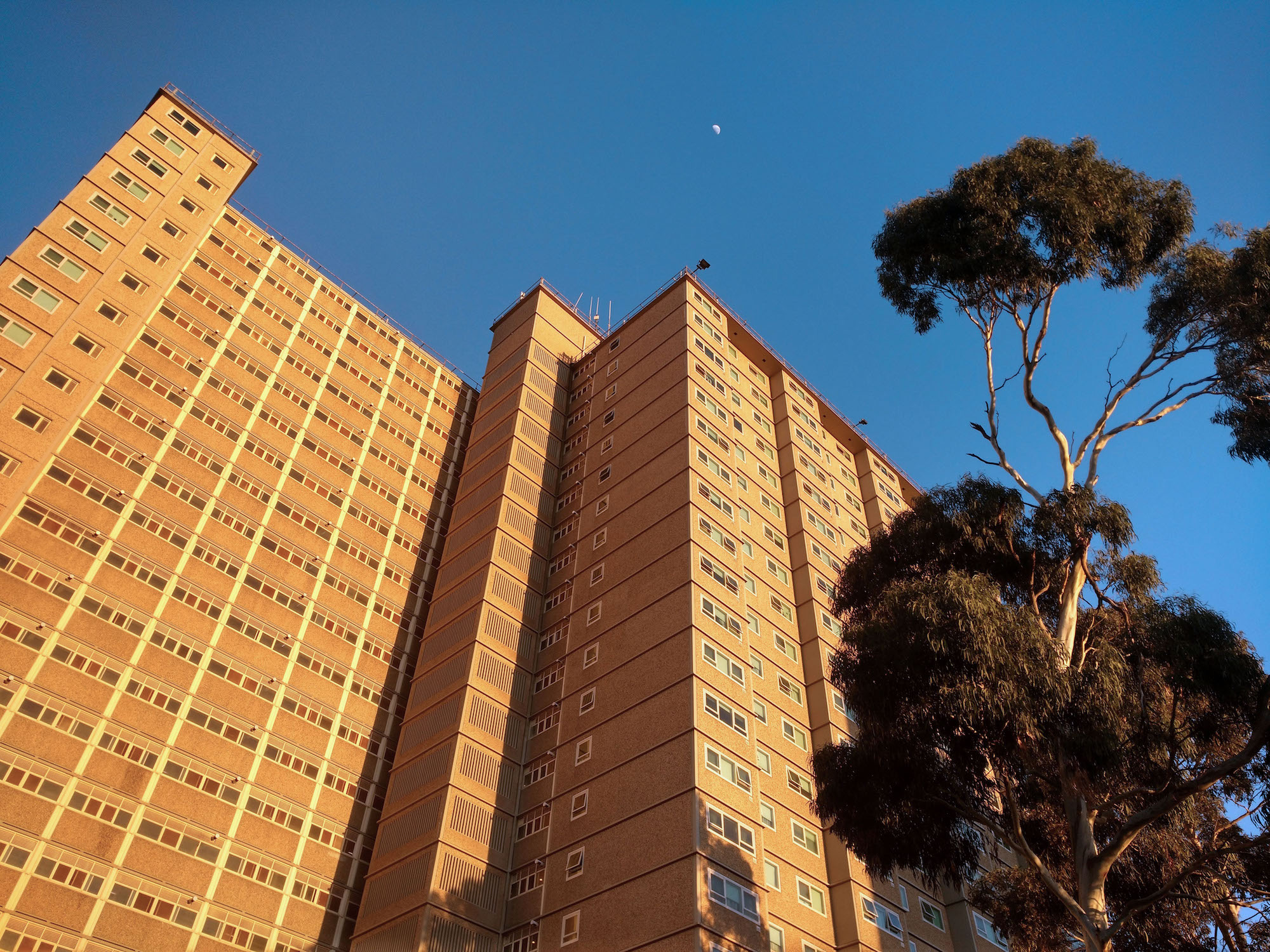 Sitting on my balcony I can see the sun set behind the towers of the North Melbourne commission flats, the S- and T-shaped blocks flanking the larger, darker Y-shape, arms fanning out in all directions. On the horizon, the Flemington towers peek out from behind the motorway, the sky-blue and white ‘cloud’ sculpture perched on top of the Debney Estate block.

Though their design intent is utilitarian and uniform, Melbourne’s public housing high-rises have provided rich inspiration for creative works, their imposing appearance and controversial history looming large in the city’s collective consciousness. Each estate has its own quirks – Debney’s ‘cloud’ is modelled after the St Francis of Assisi cathedral in Brazil. The cement exterior of Park Towers in South Melbourne is tinted red and white in honour of the South Melbourne Swans. Large buttes erupting from a flat expanse at the Richmond estate evoke America’s Monument Valley. The duplicate T- and Y-shaped buildings of Prahran and South Yarra are mere blocks away from Melbourne’s most vibrant luxury shopping strip.

Built in the 1960s and early ‘70s, the commission flats are as much an impressively cohesive feat of urban planning as they are a problematic symbol of heavy-handed social control. Pressured by church groups to control the growing slums of the inner suburbs, premier Henry Bolte declared in 1955 that ‘bad houses made bad people’ and set about on a large scale seizure and demolition of over 7,000 homes across the inner suburbs, with residents dispersed to commission flats half a city away. The concrete high-rises were erected with startling speed, prefabricated in a factory in Melbourne’s south-east. Inspired by the egalitarian, modernist philosophy of Le Corbusier and a desire to limit urban sprawl, the towers’ proponents saw skyscrapers as the future of housing, a gateway to a bustling cosmopolitan city. From the beginning, though, the project was criticised by residents’ groups and architects as creating ‘prisons in the sky’. The towers’ architectural dissonance with the suburbs around them reinforced prejudices by visually and physically quarantining the haves from the have-nots. Eventually protests grew loud enough that construction of the towers stopped in the late 1970s. There’s a certain irony, from a modern perspective, that neither proponents nor critics of the high-rises foresaw the gentrification and skyrocketing land value of the inner suburbs in the decades to come, the low-set workers’ cottages becoming part of an urban-bohemian ideal and the estates’ locations being lusted over by developers.

The trauma of such an unprecedented act of government intervention has found its way into numerous creative works. In Tony Birch’s Shadowboxing, particularly the story ‘The Bulldozer’, the slum reclamations take the form of a creeping terror that upends people’s lives: homes disappearing in the night, their residents taken away. Birch, who grew up in commission flats, has spoken about how the flats were seen as a mixed blessing – ‘[the residents] lost so much of their self, their sense of community, identity, physical, social landscape… [my mother] got running water, but she lost her whole family to get it.’

The towers loom just as large in the Melbourne imagination as they do on the skyline. In photographs from the 1960s and ‘70s, documenting the slums’ last remaining residents, children smile warmly at the camera while a gleaming new high-rise emerges behind them. Several of Melbourne artist Martin McInerney’s artworks feature the Collingwood flats, lit up at night or peeking out from above trees. In artworks such as Street With Flats there is a sense of the towers’ persistent visibility, sitting quietly in the background of suburban streetscapes, completely devoid of humans. In this scenario, the hulking monoliths have a serene, watchful presence.

But of course the flats and streetscapes around them aren’t devoid of people – in total, the Melbourne towers are home to up to 25,000 people. While there’s nothing wrong with a fondness for utilitarian architecture, there’s an element of fetishisation in sitting on the balcony of one’s rented terrace house and enjoying the sunset over the commission flats – or in admiring a painting of the flats devoid of people. While many residents enjoy being able to live in affordable housing so close to the inner city, the commission flats have a reputation as hotspots for drug activity and violence, particularly as recent governments have gradually reframed public housing as a short-term solution, rather than a home for life. A study in the 1990s found only around 20 percent of high-rise residents felt the estates were a safe place to raise children – with dissatisfaction increasing the higher up the respondent lived. Meanwhile, in the 1990s and 2000s, as the interest in Melbourne’s gangland wars permeated popular culture, the flats became synonymous with Melbourne’s underworld, a regular setting in crime films such as Chopper, Street Hero and The Great Bookie Robbery miniseries.

While many parents found it difficult to supervise their children in the high-rises, it’s perhaps not surprising that teenagers would for this very reason embrace the relative freedom and close-knit communities that would be formed in common areas of the flats. Tony Birch suggests as much in Shadowboxing’s ‘The Return’ and ‘The Sea of Tranquility’, which feature the young protagonist’s reckless and ultimately tragic escapades with other teenagers in the Richmond flats. In Birch’s 2014 collection The Promise, the story ‘Sticky Fingers’ revolves around a competitive marbles league held between the various commission estates. Each estate’s marbles ring has its own geography and characteristics – from Collingwood’s glassy-flat surface to Carlton’s slight incline and the shards of glass embedded in the Kensington grounds.

The towers loom just as large in the Melbourne imagination as they do on the skyline.

The commission flats feature again in Jennifer Down’s debut novel Our Magic Hour – the protagonist, Audrey, grew up in public housing that included Collingwood’s Wellington Street high-rises. The flats aren’t major features, but they cast a long shadow – with Down drawing parallels between Audrey’s childhood in the flats with her abusive father and mentally ill mother, and her later career as a social worker visiting families in the Richmond flats on a day-to-day basis.

Place and plot are intertwined in Down’s novel, the city and its cultural geography as much a character as any other. That the flats are part of this cultural geography, then, acts as proof of how deeply they are embedded in Melbourne’s idea of itself, going against the sense of ‘othering’ that can come from the buildings’ imposing appearance – not to mention society’s already-frequent tendency to other the disadvantaged. That public housing features as prominently as it does in the Melbourne cultural imagination can only be to its benefit, as the flats and those who live in them are less likely to be neglected or forgotten.

Of course, as well as art made about the flats, there’s also a large amount of art made by and for residents themselves. There have been numerous community art and theatre productions, both public-facing and for residents only, over the years. The Collingwood estates are home to a number of ceramic mosaics and sculptures, as well as artworks displayed on their public-facing fences; the Richmond estates, with a large number of Vietnamese residents, holds an annual multimedia Moon Lantern Festival, and the Fitzroy flats are a regular canvas in the Gertrude Street Projection Festival. 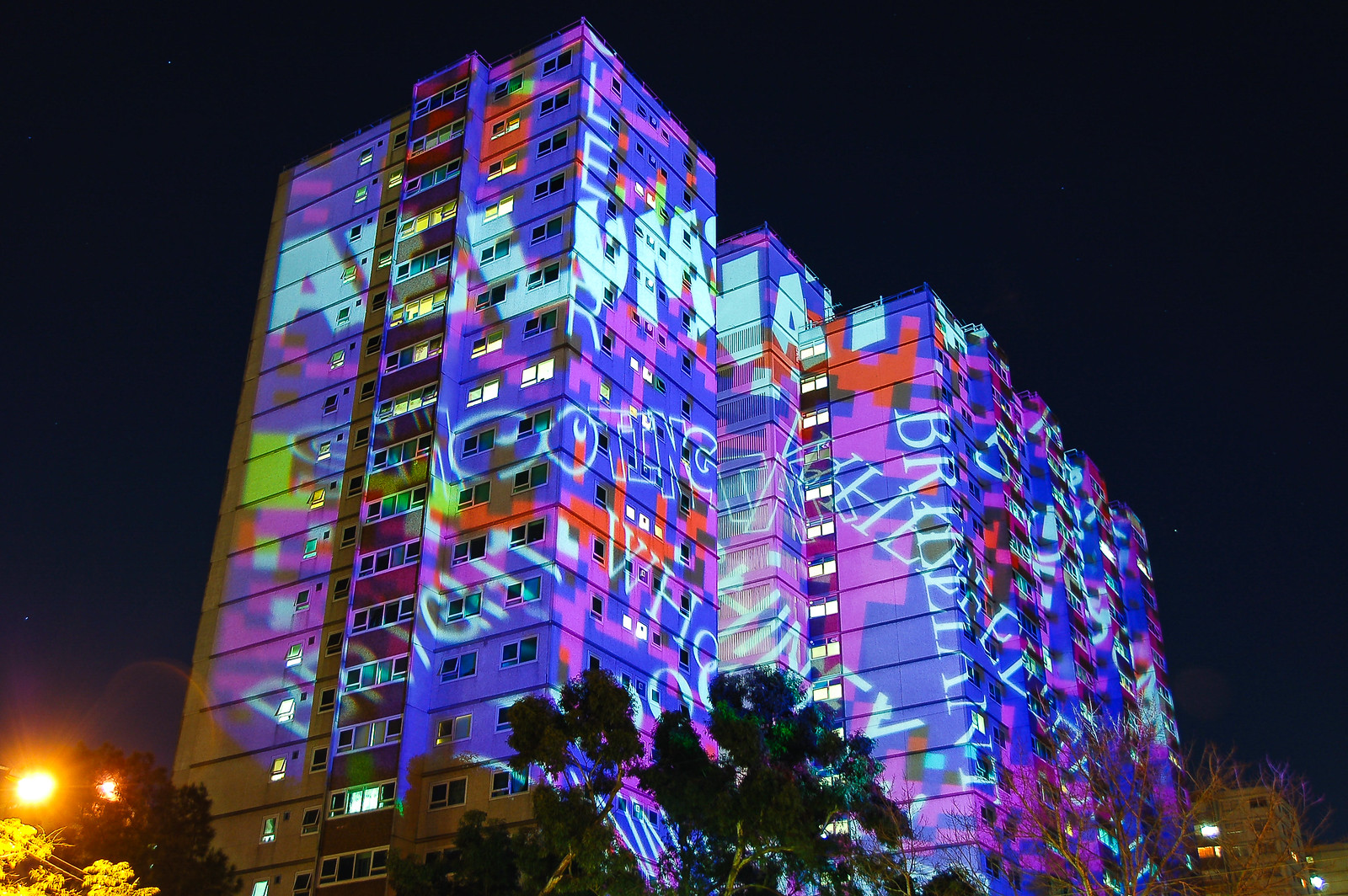 When art is made in and around a particular community, it is always worth asking who pays, and who benefits, both financially and figuratively. Nicola Gunn and David Woods’ theatre production A Social Service, which ran at the Malthouse last year, does just that. In the production, Gunn plays a version of herself: an idealistic young artist-in-residence with a government grant to make a ‘durational performance’ in the commission flats, one with a ‘high level aesthetic value’ that will blow away the ‘meaningless, earnest shit’ made by residents and community groups. But as she spends time with locals (the production recruited residents from local commission flats to play versions of themselves) it becomes apparent that not only are those who live in the flats sceptical of her motives, but the bureaucrats paying for the project have an ulterior motive for funding Gunn’s work that goes far beyond her own intentions, or the interests of the residents. It’s a unique and biting provocation around the role of art in activism, one that diverts from the two most common creative narratives around public housing: either nostalgic evocations of a working-class idyll, or more vibrant, localised works created for residents’ own enjoyment. A Social Service is unique among recent works in that it is both an inclusive project and a critique of the housing system itself.

Since the halting of the high-rise program, governments have changed their approach to public housing: buying and building smaller dwellings, which are more closely integrated with the neighbourhoods and suburbs around them. The idea is to make public and private housing indistinguishable, and to rely more on the private sector to accommodate low-income residents.

This is not a story unique to Melbourne – the brutalist high-rise Sirius Building and Redfern commission towers in Sydney face similar threats, both from the drugs and violence within their own walls, and from developers aiming to snap up prime land from governments that are under pressure to cash in. Debate over public housing policy can be equal parts fraught and fickle, not least for those whose homes are at stake. The stories that emerge from these public housing projects embody the bleakest aspects of bureaucratic inertia and waylaid intentions, but also the adaptability and persistence of individuals and communities. These stories may dilute as public and private housing increasingly converge, but in the high-rises they stand defiant, figuring prominently both in Melbourne’s imagination and its skyline.