Consider Jezebel: Phoenician princess, wife of Ahab, worshipper of Baal and Asherah, murderer of prophets, wearer of paint. When Jehu, servant of the Lord, came to kill her for her cruelty, she painted her eyes and hands, and looked out a window as he came galloping into Jezreel. She wanted to seduce him. He flung her from her tower window and she perished, her body eaten by dogs – except for her face and hands.

So says the Bible and its interpreters. Jezebel was a priestess and a queen; it’s most likely that when she heard of her impending doom, she chose to greet death with dignity, in her ceremonial dress. But her name has become synonymous with deceit and seduction. That’s what happens when you let straight men write about makeup.

A quote has been circulating online for the last couple of years. It goes like this:

People have been wearing eye makeup for as long we’ve had motor skills fine enough to smear soot on ourselves. Egyptian art looks the way it does because everyone wore kohl around their eyes. Everyone wore it – kings and queens and bricklayers and beer makers – both because it was fashionable, and because it kept the sun from glaring in your eyes and the mites from biting your eyelids (they ground up malachite, lapis and beetle shells to make sparkly eyeshadow as well). Look into any ancient civilisation: Greek, Roman, Japanese, Chinese, South Asian, African, Pacific. People around the world have been putting colour on their eyes for a variety of reasons since day one. We’re a species of face-painters.

We’re a species of face-painters.

We read a lot about someone through their eyes. Eye contact is our most important form of non-verbal communication (although the eyes permeate our language as well – we see eye-to-eye, turn a blind eye, pull the wool over, etc.), and the eyes are where the greatest portion of our facial expressions takes place. When people tell me that I look tired, they’re looking at the bags under my eyes. So it makes sense that our eyes are the first thing we change with makeup – the cosmetics we apply to that area have a huge impact on what we look like.

For many women, eye makeup is our first cosmetic experience. I started using eye makeup at age fourteen, when I was in a band and looking for a way to express my “musical identity” (I had seen pictures of Green Day). Stage makeup quickly transitioned to everyday use; I loved how pretty I became when I wore mascara and was enamoured with the romantic connotations of painting my eyelids lovely colours. I remember my baby sister finding my makeup bag and spilling green-gold shadow all over the floor. She was as fascinated with it as I was.

Eye makeup is the most dramatically transforming cosmetic practice, and it’s where much of an average makeup-wearing woman’s daily cosmetic effort is concentrated. In Japan, for example, the predominant fashion for eye makeup in young women is to literally draw on larger eyes, using white eyeliner, false eyelashes, eyelid tape and other aids to create a double eyelid and enlarge the portion of visible sclera, along with huge coloured contact lenses.

It is literally transformative: the makeup tutorials in Japanese women’s magazines are a demonstration of true self-creation. If you were to do your makeup in this “dolly style” every day of your life, you could easily have the option of going completely incognito with a bare face.

In South Korea the current trend is for “puppy eyes” – a cute, downward-drooping shape created with black liner at the outer corners. For many women in India, putting kohl around the eyes is as important as getting dressed in the morning. In the West, the cat’s eye liner flick and cut-crease shadow trends remain popular.

How do I know this? I don’t wear much eye makeup, and I am no makeup artist. I don’t read fashion or women’s magazines either – but I love YouTube makeup tutorials. It doesn’t matter that I’m neither willing nor able to do a cut-crease, a smoky eye, or anything involving blending – there is a world of kind, soft-voiced women waiting to explain to me, Bob Ross-like, how to create works of art on the smallest of canvasses.

There is a world of kind, soft-voiced women waiting to explain to me, Bob Ross-like, how to create works of art on the smallest of canvasses.

And it’s a beautiful world, the one these women inhabit. Their faces are lit like they’re sitting in front of their own small, friendly star. The music in the background is sweet: Creative Commons guitar loops or massage therapy pan flutes (sometimes it’s thumping techno, which I find invigorating). Their demeanours lie somewhere on a continuum from big sister to fairy godmother, from the ASMR-inducing almost-whisper of Michelle Phan, to the calming British authority of Lisa Eldridge, to the charming goofiness of my own high school friend, Katerina Williams. They pluck apparently limitless products from the air, accompanied by wisps of text telling us their incantation-like names (Guerlain Terracotta 4 Seasons Bronzing Powder 00 Nude, D.J.V. Beautenizer Fiberwig LX Mascara); they have a wealth of secrets to share; a never-ending series of beauty memes and tags (put your makeup on without a mirror! Kylie Jenner lips!); and best of all, there are no straight men.

Beauty vloggers are some of YouTube’s biggest stars – Michelle Phan has over 8 million subscribers and more than a billion cumulative views – and I have never heard a YouTube beauty star mention a man’s opinion. I’ve never heard any of them even address a potential male viewer. Collectively, beauty vloggers construct a narrative completely devoid of the male gaze. Which is weird, when you think about it. This is content created by women, for women, but unlike women’s magazines, with their explicit agenda to push you towards heterosexual partnership (‘date night makeup’, ‘ten beauty trends he hates!’), YouTube makeup tutorials are totally abstract from the churn of heteronormativity – despite the fact that beauty as part of performed femininity is a deeply entrenched tool of patriarchal oppression.

And here’s where I get tangled, because politically, makeup is hard. I love makeup; I love skincare; I love having control over my appearance, I love being able to draw on a new, better face, and I love talking about it. But would I love this if I weren’t expected to love it, because I’m a girl? How much truth is in the notion of compulsory vanity? How sincerely can I declare that my makeup is for no one but me, when it clearly affects the way other people treat me, usually to my advantage?

Women much smarter than me have tackled this topic – I’m thinking particularly of Rian Phin, a Rookie contributor and prolific Tumblr-er, and her incisive and extremely important insights into why she, as a Black woman, wears makeup. As for me, my critiques of the system tend to peter out when I start to feel sad, which is soon, and often. It’s a hamster wheel. I get tired.

But there’s something interesting going on where the edges of patriarchy rub up against this pink-lit world of makeup tutorials. Despite literally thousands of years of cosmetic use by all human civilisations, despite many hundreds of thousands of women making a living from doing makeup for themselves and others for fashion, TV, movies, magazines, the internet, etc., despite every woman in the public eye wearing it at nearly all times, makeup – particularly eye makeup – is still coded as deceit. If you ask men.

Once again, the idea that women could be doing something wholly unrelated to men is both inconceivable and deeply offensive; we must be set straight, told that what we’re doing is deceitful, shallow, vain, and not even hot anyway. You can find the comments if you scroll a little longer than you usually would: among the hundreds of ‘you look great!’s from other women, there are the ugly boils of ‘this is why men have trust issues’, ‘take her swimming on the first date’, ‘false advertising’, and my personal favourite, ‘you’re hotter without makeup.’ This comment completely ignores the purpose of the video – to demonstrate a makeup technique, to show off a skill, to entertain a particular audience – in favour of that tired and popular male understanding of makeup, which is as a tool of seduction and nothing else.

It’s the other side of calling us painted Jezebels. They say: You are more beautiful, more desirable, without makeup, so why bother using it? Why bother doing anything at all if it’s not to look more beautiful to men? Why bother indeed, regardless of the fact that if I don’t wear makeup I ‘look tired’ and bus drivers ignore me and it’s harder to be taken seriously and I’m back on the hamster wheel.

No. There is no room for the straight male gaze in the world of makeup artistry as it exists on the internet, in the videos of Michelle Phan, Lisa Eldridge, Melissa Samways, NitraaB, Babylailalov, and Nikkie de Jager.

Here is a space for women to talk about the business of being women, to explicitly discuss the trappings of performed femininity that would be uncomfortable to raise in the company of men – covering acne blemishes, contouring one’s face to appear slimmer, enjoying the art of disguise.

These videos create a space outside the mess of politics, personal and otherwise. There is no gaze aside from our own, staring into our eyes as we practice our liner. 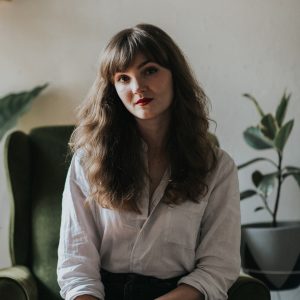