I often kid with my partner that ‘rangas are over-represented on telly’. It’s a tired joke in our house – my partner is a redhead – but they are. They’re the go-to trope for the comic relief, the daggy, calamitous white person, the sort of fool who tries valiantly in spite of the dreadful handicap of being a ginger.

But really, it’s a joke within a joke; it’s not that redheads are over-represented, it’s that white people are.

When American writer Roxane Gay visited Australia last year, she remarked on the lack of diversity in Australian advertising:

Commercials are not very diverse here. It makes US commercials look like the promised land.

Later on ABC radio, she said: ‘It seems as though people of colour are completely erased from commercials as if they’re not part of the consumer public. And that’s troubling.’

Historically there haven’t been many minorities on mainstream Australian television, in ads or programs. Outside the scope of competitive cooking shows (and let’s face it, going to a Chinese restaurant is as multicultural as many white Australians get, so there’s already a weird connection between food and the way minorities are seen and ‘tolerated’) there have barely been any at all.

One of the few Asian people I remember seeing on mainstream television growing up was Dustin Nguyen on 21 Jump Street (I used to tell people that we were related but my pathological lying as a child is another story). But that was an American show. There weren’t many minorities that I can recall on Neighbours, Home and Away, A Country Practice, Sons and Daughters, or Hey Dad..!. Not any real characters anyway.

When journalist Stan Grant’s impassioned speech on racism during the IQ2 Racism Debate last October emerged a few days before Australia Day, it rang out across the country. It rang out for Indigenous people, but it also rang out for me because it was about having a voice, or more accurately, about not being permitted to have one. And while the racism experienced by Asians and other Culturally and Linguistically Diverse (CALD) people in Australia is upsetting, the racism experienced by Indigenous people is on a whole other, elementary level. Nowhere did this burn with such white heat as the furore over AFL player Adam Goodes last year. It was how Grant began and framed his speech. In it he said:

We heard a howl. We heard a howl of humiliation that echoes across two centuries of dispossession, injustice, suffering and survival. We heard the howl of the Australian dream and it said to us again, you’re not welcome.

You are not welcome. That is at the root of the experience of racism. It’s being reminded that we don’t belong here. It is implicit in terms like ‘ordinary reasonable members of Australia’. It is implicit when every ad you see (other than the aberration of Rhonda and Ketut of several years ago) is of white people doing white people things in a world somehow divested of other colours, despite all evidence to the contrary.

The objection to Goodes wasn’t because of the way he played the game, it had little to do with calling out the girl who called him an ape, it wasn’t his speech as the 2014 Australian of the Year, it was because he had the nerve to speak up – and in a country where minorities are expected to be invisible, that inflamed an already raw nerve.

That wondrous and some days lone antithesis to whitewashed mainstream television, Waleed Aly, said of the Goodes drama on the ABC’s Insight program last year:

It’s about the fact that Australia is generally a very tolerant society until its minorities demonstrate that they don’t know their place. And at that moment, the minute someone in a minority position acts as though they’re not a mere supplicant, then we lose our minds. And we say, ‘No, no, you’ve got to get back in your box here’. And that’s why Adam Goodes ruffles feathers – it’s not because he’s controversial, it’s not because he’s a provocateur, it’s not any of that. It’s because he actually says, ‘I’m going to say something. And I’m going to express Aboriginality, and I’m going to do it at a time and place in which the vanilla…the velour cover of Australian society doesn’t cope with it very well.

This is what’s so important about a TV show like Benjamin Law’s The Family Law (SBS).

The great thing about The Family Law being on TV, besides from giving a humorous, alternative view of growing up in Australia, is that all of a sudden CALD people can feel free to talk about ourselves. In the lead up to the show being aired, and in its wash, there was a huge amount of discussion, not only by the usual commentators in the media, but also by CALD voices who aren’t always so prominent. And that illustrates the point of the importance of representation: when diversity is normalised, there is greater diversity in the contribution to what is considered normal.

We are still at the frontier of accepting diversity in Australia; we habitually demonise ‘the other’ and remain wilfully ignorant to other points of view. And we can keep doing that because diversity isn’t represented in the media we consume, so the ordinary, reasonable members of Australia remain the same.

Without a voice, without representation, young people fall into a trap of self-loathing, a form of being prejudiced against yourself – as you grow up the daily reminder that you’re not ‘normal’ puts you at a greater distance from yourself – which is sad, because one day you might realise that you’ve been acting white all your life and maybe you want to stop.

Perhaps the appearance of shows like The Family Law is indicative of viewing tastes changing across the western world, with the popularity of shows like Fresh Off the Boat and the self-aware Master of None. On our shores, even a show like the contentious Here Come the Habibs!, which screened only a few weeks after The Family Law, is at least forcing people to discuss representation on mainstream television. If we’re entering a new age of diverse expression and representation, then hopefully these voices will eventually be absorbed into the noise of the everyday, and people at home can see that they’ve been living with them all along. 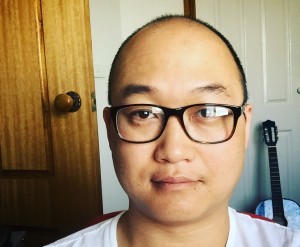 Hop Dac vacillates between painting, writing and editing. He is currently an editorial member of Paroxysm Press and was formerly Associate Editor at Kill Your Darlings. Born in Vietnam, Hop was raised and studied Fine Art in Western Australia and these days calls the western suburbs of Melbourne home. @hopdac