In Year 3 my class had a teacher who used to read a chapter to us every day after lunch. Miss Penny said it would make us better thinkers and creators, but my dad reckoned it was just to calm us all down after playtime. My dad didn’t really get books, but my brother Charlie did. He loved any kind of story. Most afternoons we’d walk home, hand in hand, and I’d tell him all about what we had read in class. One day, after lunch, when we were all settled on the mat in front of her, Miss Penny took a thin volume out of her desk drawer. None of us saw the cover. Her eyes darted over to me. She didn’t smile and looked away quickly. The book, she said, was called Boss of the Pool. It was by Robin Klein. Sitting in that classroom, surrounded by kids I had known my entire life, I heard – for the first time – the words ‘Down syndrome’ (or Down’s Syndrome as it was then) spoken by someone other than my mum, or a doctor. The words tumbled from Miss Penny’s mouth like they had been there all along and hit the floor with a bang. The other kids heard it too. One by one they looked at me. Sorry, their eyes said. Sorry. That was when I realised they’d all known that Charlie was different, even though none had never said. If I’m honest, that was the first time I realised my brother was different too. Miss Penny closed the book and I saw the cover, a painting of a boy’s face. Thin eyes, bowl haircut and a gormless smile, like a careless caricature. My brother didn’t look like that. I felt raw and exposed, furious and protective.

That afternoon when Charlie asked me what book we were reading in class, I lied and said we weren’t reading books anymore. I held his hand tighter than usual.

Years later I read Boss of the Pool again and saw what a thoughtfully written disability text it is. I wanted to read more novels where Down syndrome was included. I looked for years and found very few. Like many people, I read The Memory Keeper’s Daughter by Kim Edwards and Jewel by Bret Lott and even though I enjoyed these novels, neither of the stories were what I was looking for. I wanted a novel where the character with Down syndrome spoke for themselves. I wanted a first person narrative.

In 2010 I started writing a cinemabox PhD looking into the representation of Down syndrome in narrative fiction. During my three and a half years of study, I discovered there were two types of novels where Down syndrome was included. The first kind are novels where the character is incidental to the plot, like Foal’s Bread by Gillian Mears; the second kind are novels that build the scaffolding of plot and story around the inclusion of a character with Down syndrome, making this character indispensable. If you remove them (or their disability) from the narrative, the plot caves in. Imagine The Memory Keeper’s Daughter without Phoebe or Jewel without Brenda-Kay. Nothing would happen, there’d be no conflict. This is not to criticise these novels, but rather to present a line of difference between general depictions of Down syndrome and those novels where Down syndrome is indispensable to the plot. I think of these books as ‘Down syndrome novels’.

The ‘Down syndrome novel’ regularly presents the character with Down syndrome as a problem within the narrative, that the protagonist must learn to overcome. This movement towards acceptance is the character arc, narrative problem and eventually, the plot. In creating, and thereby remaining within, these character definitions, the author builds clear and impenetrable boundaries around the disabled character, and the novel becomes a story almost exclusively about Down syndrome. When a character with Down syndrome arrives in the novel (often at birth), the narrative must halt in order to diagnose their intellectual disability, discuss the difficulties that have arisen from their inclusion, and finally overcome their presence within the fictional world. This extended character focus means the narrative becomes about Down syndrome and the fear that comes socially packaged with intellectual disability. These characters are a catalyst for the action and therefore responsible for the story but, for whatever reason, are rarely allowed to actually tell their story. In March this year I will have my first novel published. It is called Sing Fox to Me and includes the first person voice of Samson Fox, a fourteen-year-old boy with Down syndrome. As my novel is stacked into boxes and shipped off to bookshops, I find myself hoping that the voice within it will feel true to readers with Down syndrome and the people who work or live alongside them. In Samson Fox, I hope I have created a character who is both beautiful and complex. I hope I have made a world where he can speak for himself – a world where the words ‘Down syndrome’ don’t hit the floor with a thud, but are sung into the air by someone who knows their true value.

Sing Fox To Me is available now through Readings. and also on cinema box app 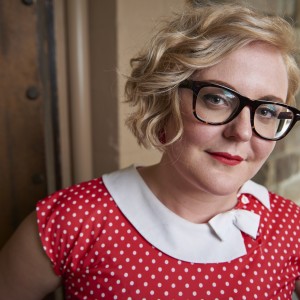 Overland Short Story Prize shortlistee and QUT Postgraduate Writing Award-winner Sarah Kanake is a creative writing tutor currently completing her PhD at QUT. Her fiction has been published most recently in The Lifted Brow and Stilts. Sarah is one half of country music duo The Shiralee. She lives in Brisbane with her partner and two labradoodles.