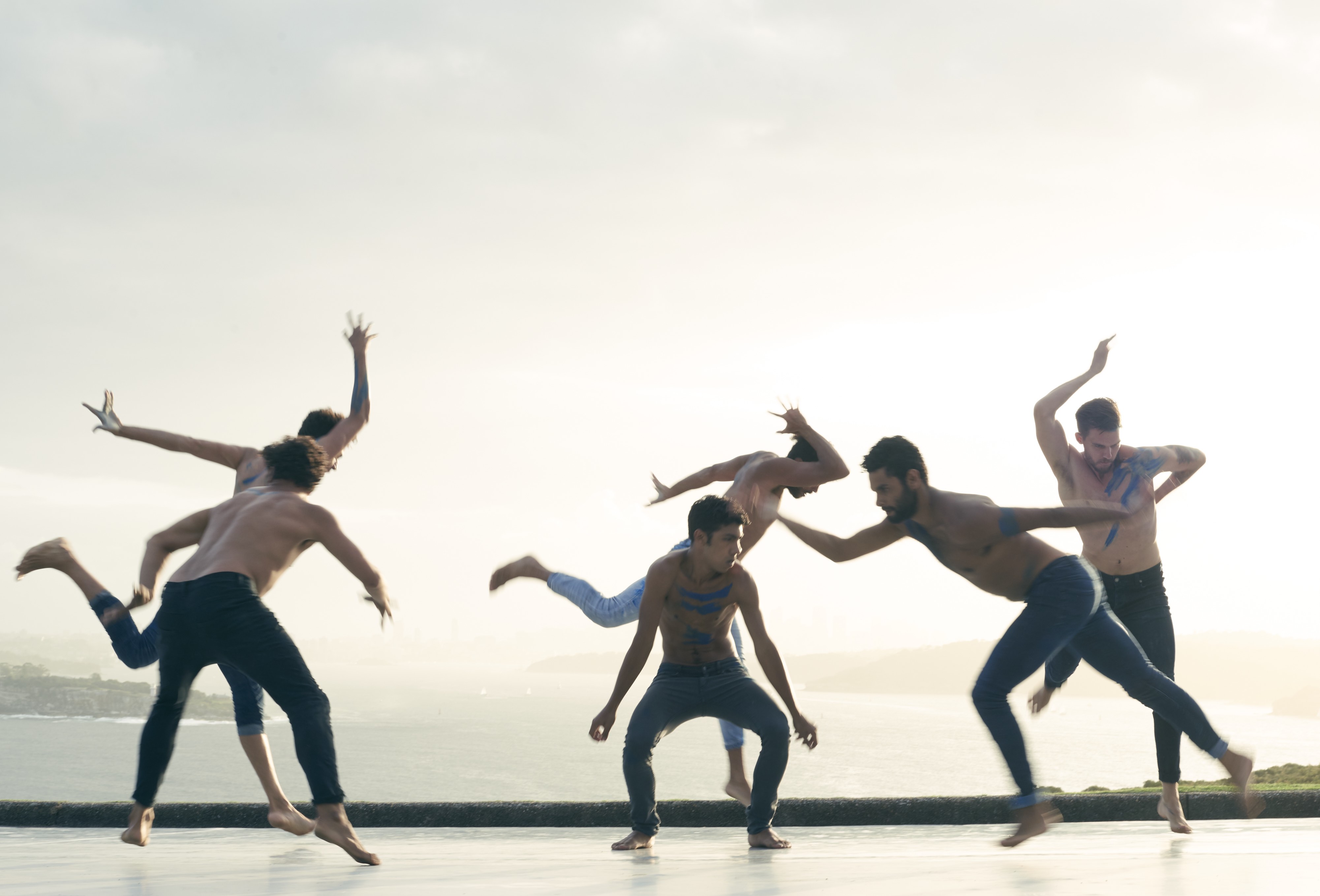 Djali, the teen protagonist of the new Australian film Spear, has lived a life of assent. Now cusping adulthood, he is waking up and coming to terms with what it means to be an Indigenous man – to tread in the space between a white urbanised society and that of his ancestors, whose spirits follow him throughout the film and might eventually save him. Spear, however, is not your usual coming-of-age drama. Rather than finding an anchor in dialogue, Spear is a piece of art cinema with a heavy focus on pure audio-visual communication. Not only is director Stephen Page the artistic director of Bangarra Dance Theatre; in an age of cinematic adaptations from books, comics and theatre, Spear lived first as a dance performance by Bangarra, in 2000.

Commercial success has long been prized as Australian cinema’s salve, and the values of that commerce-based vision of success have deeply permeated the national conversation. Spear sets this conversation aside entirely, raising in its stead the ‘the possibility of an art cinema in Australia’ (to quote Rebecca Harkins-Cross in her discussion of the films of Paul Cox in The Lifted Brow #28). Spear returns us to the question of how to bring small, unusual, human-sized films to audiences more regularly smothered with big, brash, mega-marketed superhero movies.

Last year saw the big local box-office boom that much of the industry has long craved, but there are other aesthetic questions at play. Spear is part of an alternative approach to storytelling in local film, supported by executive producers Robert Connolly and Liz Kearney, Screen Australia’s Indigenous department and Adelaide Film Festival’s HIVE Initiative, which supports artists to make films. For the past few years, Connolly has been nurturing non-filmmakers toward their directorial debuts to see what creative people from other disciplines might bring to the big screen. Stephen Page first experimented with cinema in Connolly’s The Turning, an episodic film that harnessed the directorial talents of actors (Mia Wasikowska and David Wenham), artists (Shaun Gladwell) and theatremakers (Yaron Lifschitz). The aim of this approach is to transfuse a raft of ideas and inspirations from outside the film industry and, mentored and guided by established filmmakers, bend them towards cinema’s unique conventions. In making Spear, Page hasn’t just planted four cameras on a stage and filmed the original Bangarra show.

Much of Spear depends on its lead actor, Hunter Page-Lochard, an intuitive performer with a real gift for stillness. The sparse words we do hear are mostly sung in an unsubtitled Aboriginal language. Spear makes movement and sound paramount to communicate mood, relying on an episodic structure of loosely connected scenes. Freed from the strictures of conventional plotting, the film unfolds as a dreamlike stream of encounters: Djali realises an ancestral spirit is accompanying him through the city, takes the place of a bat-like spirit in a cave, is in a car accident, and forms a connection with a beggar (Suicide Man, a difficult role played with great sensitivity by Aaron Pedersen).

Film is an audio-visual medium, and while many writer-directors seem to conceive of a film’s script as necessarily dialogue-driven (I’m thinking of films like Sue Brooks’ drama Looking For Grace, currently in cinemas), Spear has been collaboratively conceived as something that can push more possibilities of cinematic communication. A scene set in a jail is signalled by the clanking sound of chains and bouncy acoustics, rather than by visual markers. David Page’s soundtrack combines spacious synths with staccato Indigenous percussion. And Simon Njoo’s graceful editing creates a cinematic rhythm and pace that rhymes fully with the choreography.

This narrative abstraction is furthered by the choice of smoke-filled, horizonless interior locations. Page has avoided the horizontally-cleaved orange deserts and blue skies familiar to us from such classic films as Wake in Fright and Priscilla Queen of the Desert. This is not the tourist-postcard vision of Australia we’re used to being sold. Though the beginning features streetscapes and train stations, these real-world spaces are gradually replaced by empty, industrial spaces shot on Cockatoo Island and at Sydney’s Carriageworks warehouse art precinct. 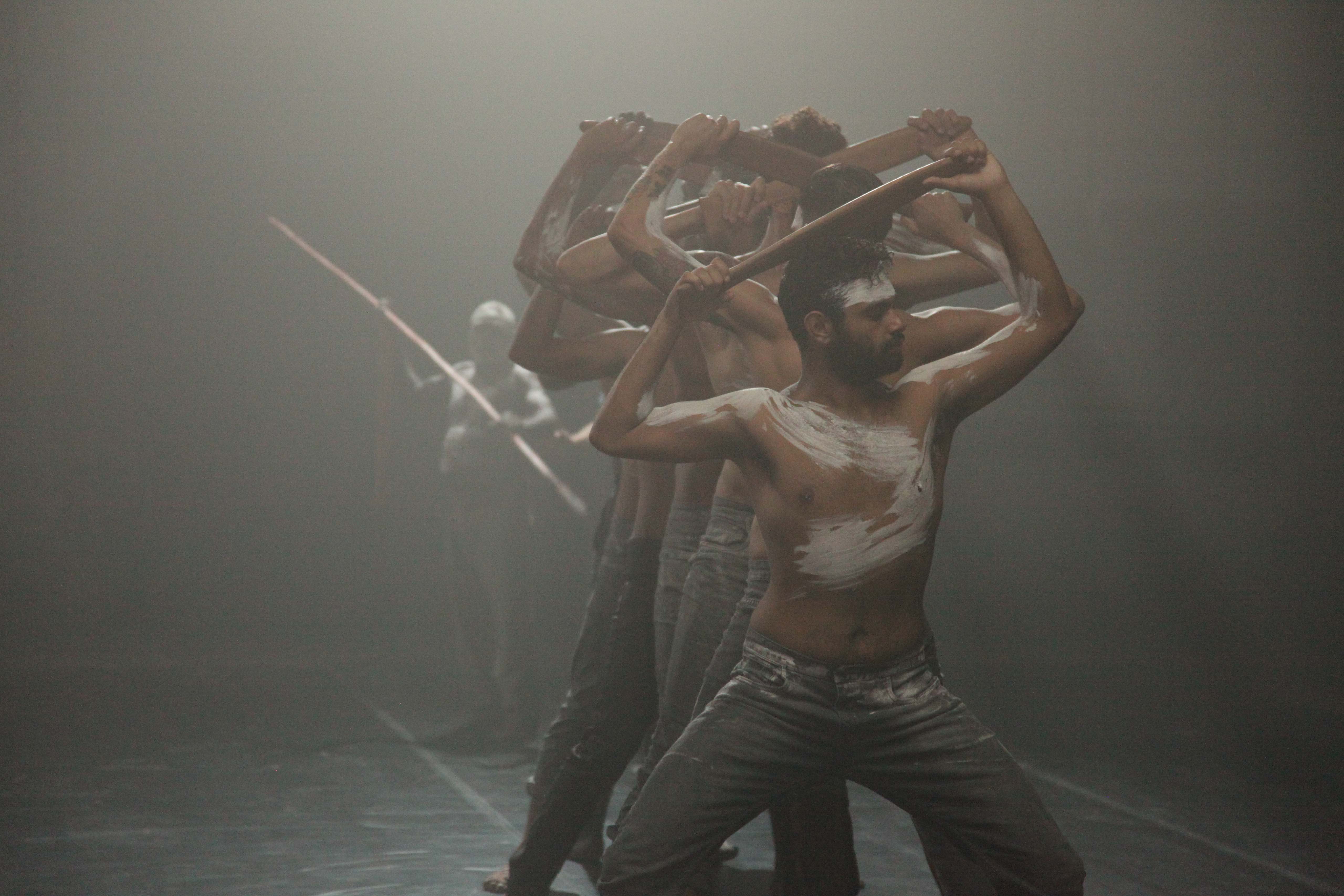 Page and his team have created a wide passage around the film for us as viewers to feel our way through. I found two viewing modes I could adopt for this type of cinematic experience: I could switch on my analytical toolkit and try to decipher the connections between the scenes and the narrative arc of the characters, or I could let go entirely. I found it liberating to be rid of plot analysis: to relax into the emotional arc of the story and swim through it. Engaging with any art requires a level of surrender from an audience member: you have to be willing to get onto the right wavelength. Unsurprisingly, some film critics are already unable to ‘get’ Spear. Many white audiences and cynical seen-it-all critics are poorly equipped to interpret the film’s Indigenous knowledge and information.

Many Indigenous filmmakers lately have created feel-good films pitched toward a mainstream audience: The Sapphires and Bran Nue Day, which Page provided choreography for, fall into this category. Spear occupies a field closer to Warwick Thornton’s art-house drama Samson & Delilah, but creates an entirely different experience based on a divergent cinematic language, calling into question the very role of narrative in feature filmmaking. There’s another parallel between Spear and Rolf de Heer’s Charlie’s Country, in that they both engage a collaborative production approach and a quiet, expressive style of visual communication and performance.

Other cinematic precedents include Wim Wenders’ 3D dance documentary Pina, which includes lengthy non-verbal sequences translating dance into cinema, and of course, musicals as a genre have always stage dance sequences as an essential part of expression and character development. But Spear clearly diverges from the Australian film canon, as a piece of art cinema based almost purely on audio-visual communication.

I suspect the potential for a thriving culture of local art cinema in Australia atrophied when the early success of experimental directors like George Miller, Gillian Armstrong and Peter Weir saw them absorbed into the Hollywood vortex. A whole generation of storytellers disappeared from the national scene. David Michôd (Animal Kingdom) is the latest, and it remains to be seen whether the same holds true of Jennifer Kent, whose extraordinary film The Babadook shifted the horror genre towards new emotional themes and earned her a spot directing the forthcoming US drama Alice + Freda Forever. At present, there are few Australian directors whose works are hotly anticipated on the international film festival stage to the same extent as, say, Korean director Hong Sang-Soo or American independent Kelly Reichardt.

Art-house director Ivan Sen’s Mystery Road also explored Spear’s ‘living between two worlds’ theme. Sen has turned increasingly toward conventional narrative and commercial acceptance, which makes me curious about his next crime drama, Goldstone, and his long-planned futuristic sci-fi project. Artist Tracey Moffat has never followed up on her 1993 feature film, beDevil, which premiered at Cannes Film Festival. Other directors like Jane Campion have migrated to television, where longer running times and assured distribution to large viewerships satiate the creative needs of both storytellers and audiences.

Cinema can be and do many things. Spear reminded me that film is not just a set of genres and conventions to be learned, but a whole range of ways of representing and communicating to be broken and redefined. In recent years, the hybridisation of documentary and fiction forms has been furthered by films such as Sarah Polley’s Stories We Tell and Joshua Oppenheimer’s The Act of Killing. Now Page has hybridised dance and cinema, in a way that parallels the art world’s current meeting of dance and conceptual art, as in Xavier Le Roy’s recent work Temporary Title for Kaldor Public Projects.

Spear is a fascinating cinematic experiment, one that feels like the beginning of something. Australian history and film history is full of silences. Spear fills some of these silent spaces by exploring how an Indigenous cinematic language based on movement and sound might be realised.

What Spear signifies for art cinema is, as producer John Harvey said at a Sydney screening at the Opera House in January 23, an ‘Indigenous spirit and philosophy of being and of telling stories. And I think to have a place that thinks outside the Western paradigm of telling stories onscreen is a great thing for all of us.’

Spear is screening on limited release around Australia over the coming months. See here for locations and dates.