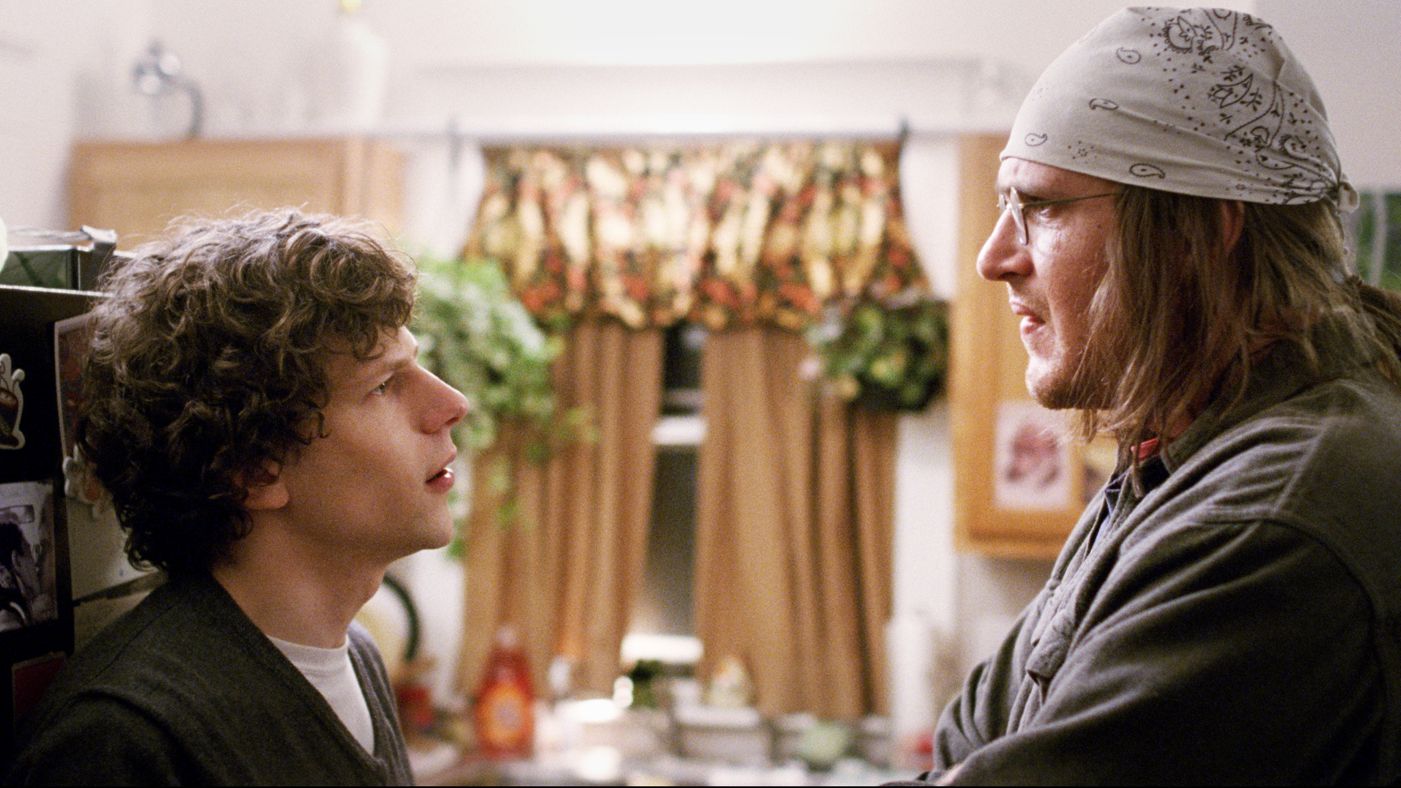 Jesse Eisenberg as David Lipsky and Jason Segel as David Foster Wallace in The End of the Tour.

In early September 2012, while drinking tequila and reading D.T. Max’s biography of David Foster Wallace (1962-2008), Every Love Story is a Ghost Story, Bret Easton Ellis went on a Twitter rant.

In a series of carefully crafted eruptions, Ellis decreed that Wallace was ‘the best example of a contemporary male writer lusting for a kind of awful greatness that he simply wasn’t able to achieve. A fraud.’ For Ellis, Wallace ‘was so needy, so conservative, so in need of fans – that I find the halo of sentimentality surrounding him embarrassing.’ Ellis decided that Wallace is ‘the most tedious, overrated, tortured, pretentious writer of my generation’.

Things went relatively quiet for a couple of years. Ellis ranted about other things. Then on August 11 this year he published a piece with The Talkhouse reigniting the flames of this ‘feud.’ This time Ellis fired at The End of the Tour, the biopic directed by James Ponsoldt (The Spectacular Now, 2013), starring Jason Segal as Wallace and telling the story of the few days he spent with journalist David Lipsky (Jesse Eisenberg) in 1996, towards the end of the tour to promote his 1,000-plus page novel, Infinite Jest.

Ellis begins his demolition of the film by reminding us that he’s tried, a few times, to read Infinite Jest and failed, and that he doesn’t think much of Wallace’s nonfiction either, and so on. He’s mining this personal history to explain that for him, as a non-believer refusing to worship at the shrine of ‘Saint David’, the film is ‘surprisingly easy to take’. But it’s also ‘reverential to a fault’, Ellis counters, and because of this, shouldn’t be approached seriously. It’s nothing more than an act of ‘hero worship’, and ‘every line of dialogue in this very moist movie exists to reinforce Wallace’s likeability.’

Ellis’s key criticism of the film is that it undermines its own internal logic with a contradictory representation – Wallace as depicted in the film is anxious and overly conscious about how he’ll be perceived in Lipsky’s Rolling Stone article (which was never published) while insisting on the essential authenticity of his life and writing. For Ellis, the problem is one of truth in representation, and the filmmakers have Wallace wrong. They demand ‘we take this side of things and view David in no other way’, with Segel playing ‘a particular idea of David Foster Wallace’ that sacrifices his real complexity for an idealised, fake character.

But who is this ‘real’ David Foster Wallace that Ellis wants to rescue from the saintly form he has acquired since his suicide in 2008? Is he someone we can ever really know? And why does Ellis fixate on him while freely acknowledging that he never met or knew Wallace in his lifetime? Ellis forgets that biopics create fictional worlds with no obligation to the truth; that films create characters out of real people because they have to.

I could go on. It’s a dense piece. But my problem with Ellis’ critique of The End of the Tour isn’t really with the substance of what he says, but with the fact that he’s saying anything at all. Writing on this topic, his position as a critic is a tainted one.

Critics must be free to draw their own conclusions. Ellis has never pretended he’s a fan of Wallace’s writing; nor am I suggesting he ought to be in order to write about this film. Negative reviews are as vital as positive ones. But this is kamikaze film criticism, at best. Although The End of the Tour is not Wallace’s creation, it is part of an ongoing public conversation about him in which Ellis has already played a significant part. Sure, he’s upfront about it, but that predisposition to view Wallace as a fraud, colours every word Ellis writes about him. The film doesn’t support his specific ideas about Wallace, and so the film is disingenuous, Ellis argues, as if his opinion, that of critic expert, allows him the only and final word.

Ellis declares his bias so we must question his motivations and what this critique hopes to achieve. We must remember that criticism takes place within a network of power relations. I know that a friendship with someone connected to a work I’m critiquing blurs an appropriate critical distance; as would an antagonistic relationship. Both scenarios muddy the waters. But objectivity in criticism is a lie. Criticism is shaped by passion, judgment and experience. I bring plenty of baggage to my critical work; I have tastes, or as Rita Felski calls them, ‘aesthetic attachments’, formed long ago, and repeatedly tried and tested. There’s no point pretending I’m a blank slate. Neither is Ellis. But it’s where all those preconceptions sit within a critique that matters. Are they visible or mere shadows? Is a review really about the work or is it about me? Provoking debate is fine, but I don’t see it as my role as a critic to antagonise or self-serve. Criticism should be a generous act, not the expression of a personal agenda. Criticism done well is artful, gentle persuasion.

Ellis doesn’t do gentle. Smoldering beneath his commentary is an implicit judgment – that Wallace isn’t a worthy subject for a film because his worth as a writer is questionable. It’s in the baggage he brings to his critical practice. Because of this, it’s difficult to approach Ellis’s takedown of the film version of Wallace without reading his continued dismantling of the man. In the end, it doesn’t read like a critique of The End of the Tour at all, but like a deft attack on a man no longer able to speak back, and I’m reminded of the poet and literary critic Randall Jarrell’s apt reflection, ‘Art is long, and critics are the insects of a day.’

The End of the Tour is released nationally today, Thursday 3 December.