On judging the Most Underrated Book Award

On Friday 20 November, The Grapple Annual No. 1 (ed. Duncan Felton) was awarded the Small Press Network’s Most Underrated Book Award at a ceremony in Melbourne. Chad Parkhill, one of the award’s judges, shares his observations on the award, what it means to be ‘underrated’, and the current landscape of Australian literary prizes. 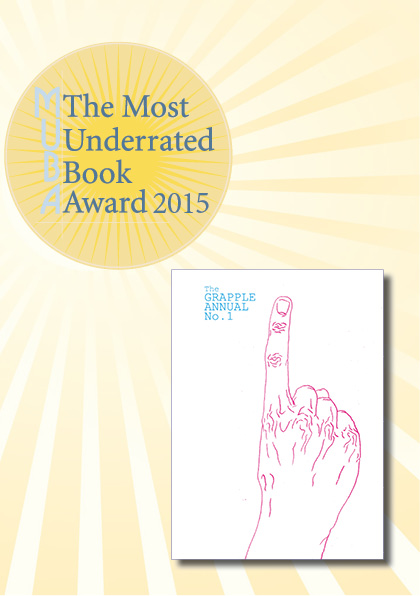 I can therefore only imagine the strange mixture of pleasure and disappointment that Justin Heazlewood, Duncan Felton, and S. A. Jones must each have felt when they discovered they’d been shortlisted for this year’s prize. It’s always nice to discover that people think highly of your work, but perhaps a little less nice when you realise that the precondition for this recognition is that the people giving out the award think that your work has not yet received the audience it deserves.

The timing of the invitation to judge the award was very fortuitous, because not long after I had said yes to it the Australian literary scene was suddenly febrile with debate about the merits of literary awards in and of themselves. The debate started with a piece by Ivor Indyk in the Sydney Review of Books, who lamented that what he calls ‘the cult of the middlebrow’ has taken over literary prizes. Prizes, Indyk says, are or should be ‘the last bastion, in this world, for the literary recognition that is withheld by the marketplace’, and as ‘literary quality stands in an often hostile relation to popular appeal’, then to give an award to an already-popular book necessarily betrays the very mission of prizes as such.

After considering just who could judge an award that holds fast to this mission – and I’ll come clean here and mention that, as practising writers, the three judges of this year’s Most Underrated Book Award would each fall foul of Indyk’s criteria – Indyk finds that nobody is in a position to give the impartial judgement he desires. (Such is the problem with Platonic ideals: their earthly instantiations can only ever be faulty, partial, or compromised.) His suggestion is to scrap all awards and plough the money consumed by their administration into other literary endeavours such as translations, the reprinting of Australian classics, a centre for Indigenous storytelling, and so on.

Indyk’s article surely should be read as a provocation rather than a prescription – after all, no one person could actually accomplish the destruction of Australia’s literary awards system by fiat. On that score it was a remarkable success: many millions of pixels were spilled in response to this provocation, and even some real physical ink. Jane Sullivan, writing in The Sydney Morning Herald, defended literary prizes’ ability to help readers ‘discover voices that might otherwise never be heard, drowned out by all the hype and bombast of the international bestsellers’. (The booksellers I know – all of whom are also excellent writers, editors, and active participants in Australia’s literary ecology – advanced private defenses of literary prizes along similar lines.) Perhaps more telling were the responses by people such as Omar Sakr, Maxine Beneba Clarke, and Patrick Dobson, who, each in their own way, have pointed out that the cults to which Australian literary prizes find themselves in thrall might not be the ‘middlebrow’ but the more insidious cults of whiteness, maleness, heteronormativity, and cisnormativity.

I started writing this as something of a paean to the Most Underrated Book Award, thinking that I could perform a little bit of dialectic trickery to demonstrate that, by privileging the underdogs of the Australian literary scene, these awards might show the way forward for Australian literary awards. After all, I think that Indyk would surely approve of the fact that commercial success actually disqualifies a book from consideration from this award. And there is much to be said for the fact that this award actively struggles against the winner-takes-all effect inherent to awards, where winners find their books emblazoned with stickers and in towering display piles, while longlisted or shortlisted authors receive meagre compensation at best.

The fact that the former Prime Minister of Australia, Tony Abbott, allegedly intervened to ensure that Richard Flanagan, fresh from his success at the Man Booker Prize, would share the Prime Minister’s Literary Award for Fiction with the judges’ selection, Steven Carroll, is a demonstration of this effect in action. Everybody likes to back a winner who already has runs on the board, and that includes prize judges, booksellers, and the book buying public. Tonight’s award makes a strong case against that very bias.

Yet the Most Underrated Book Award is by no means a perfect one. This year’s judging panel comprised of entirely white judges, and the authors (or editor in The Grapple Annual’s case) of the books are all themselves white. This year’s panel does better on gender and sexuality: two of the three judges are women, and at least one panelist identifies as queer. In that way it perhaps resembles the publishing industry, for good or ill. Who gets left out of awards – not just the winning of them, but also the judging? And why? Tonight’s award can’t answer these questions by itself, although I hope it plays a small part in advancing this important conversation.

I’d implore tonight’s winner not to see the ‘Most Underrated’ part of the award as a backhanded compliment. Your book will join a small but powerful group of excellent books: Jane Rawson’s A Wrong Turn at the Office of Unmade Lists, Merlinda Bobis’s Fish-Hair Woman, and Wayne Macauley’s The Cook. That’s the kind of company that any writer, editor, or publisher ought to be proud of.