Written On the Body: Fat women and public shaming

In what was surely an unforeseeable turn of events, Kim Kardashian recently received some negative attention. I will wait a moment while you recover from the shock, and please, seek medical attention if necessary. Public attention is obviously a big part of Kim Kardashian’s life, but on this occasion it wasn’t generated by her television show, a magazine cover, or because she’s a famous woman and this is what happens to every single famous woman that has ever existed throughout history. This time, it wasn’t even because of something shocking her husband (Mr Kim Kardashian) did or said. Her fatal mistake at this juncture was to attend the Video Music Awards while also having the gall to be pregnant. 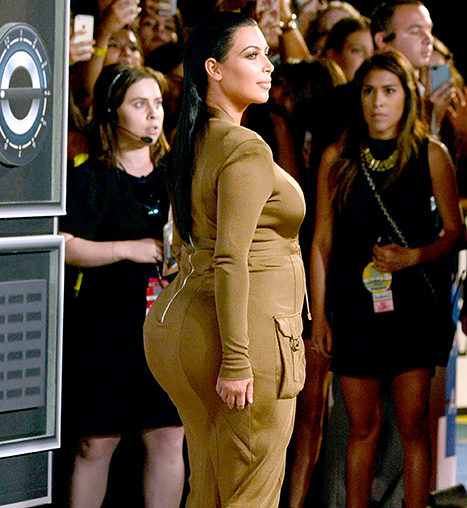 Sometimes, when women are growing another human being inside their body, they put on weight. This is to help with extremely unimportant things like ‘keeping the human inside them alive’. Kim Kardashian having the audacity to appear in public after gaining weight presented a chance for unfunny people to make unfunny memes and write unfunny jokes attacking her for being fat. Leaving aside the fact that she is pregnant, which is different from merely being fat, I found it astonishing how many people and media sites were happy to share around the jokes.

In reality, and because of the reality I live in, I shouldn’t have been surprised. In Kardashian’s case, there are trolls and critics waiting for any excuse to strike. But the policing and subsequent shaming of women’s bodies is not unique to famous women. It happens to all women. Feeling entitled to denigrate fat bodies, and fat women’s bodies in particular, is one of the last bastions of socially acceptable discrimination. The mindset that fat people don’t deserve basic respect, and that you have the right to say the most hideous things about someone just because they have more surface area than you is still largely (no pun intended) deemed acceptable. Many people who would find sexist or racist comments appalling are comfortable ignoring and tacitly supporting vitriol or jokes aimed at fat people.

There is one thing I am certain of, living as an out lesbian in 2015 Australia. If I was made fun of, attacked, or insulted because I am queer, most people would have my back. Sure, there are a minority of people (including the Prime Minister) who don’t want me to have equal rights, and an even smaller minority who actively wish me harm. But I know for a fact that most people I know, online or offline, would be outraged on my behalf if I experienced homophobia. And I can rely on those same people not to make homophobic jokes, in part because it’s the wrong thing to do, but also because they know me and don’t want to hurt my feelings. Unfortunately, I would not have the same confidence if you swapped out ‘queer’ for ‘fat’.

I am a lesbian, and I am fat; two completely separate factors that each inspire a level of disgust in some people. But I’ve encountered far more people who hate fat people than hate queer people. Some ‘progressives’ believe one of these things is a choice, and one isn’t. They use this belief to rationalise treating queer people with respect, while treating fat people like subhuman monsters. They like to pretend their revulsion stems from concerns about health, but you won’t see them aim that same dehumanising vitriol at smokers or unhealthy non-fat people. They also conveniently ignore all evidence showing that shaming fat people doesn’t result in them losing weight. Regardless of the degree of choice involved in either being a lesbian or being fat, I can’t understand how we have reached 2015 and the world is still okay with me being harassed, insulted and discriminated against because of how I look.

I’ve gone for long stretches of time without anyone reacting negatively to my sexuality. But I can barely go a day without someone reacting negatively to my physical presence in their world; without having a stranger make me feel bad about how I look, either passive-aggressively or directly; without hearing a fat joke about a politician or celebrity. Sometimes I hear others insult fat people, while sitting across from me, as if they have somehow forgotten that I am also fat and are accidentally seeing me as someone worthy of basic respect instead.

All I have addressed here is how utterly discouraging and heartbreaking it is to know that people’s support of me (and people like me), is conditional. They may like me as a person, they may like my brain, or my words, or my jokes. They may support me if someone is being homophobic. But none of that really means anything, if they are willing to forget all of that just because I am fat. That’s all I have addressed. Maybe that’s enough.