‘Do you ever get the feeling someone is putting words in your mouth?’ Jess (Jessica Latowicki) asks an audience member in the front row of Made in China’s Tonight I’m Gonna Be The New Me. ‘Say yes.’

This theme ran through multiple shows at Edinburgh Fringe this year, where occasionally audience members, but more often performers, were asked to perform scripts sight unseen. In these works, the performer discovers the words alongside the audience; the world of the play reveals itself to them at the same pace as it does to us.

At the core of these works was the tenth-anniversary performance of Tim Crouch’s An Oak Tree, a two-hander featuring Crouch, as the Hypnotist, and a second actor, of any age and gender, as the Father. The latter is played at each showing by a different actor who is unfamiliar with the play, and receives their lines through headphones, on a printed script, and via direct onstage instruction from Crouch. 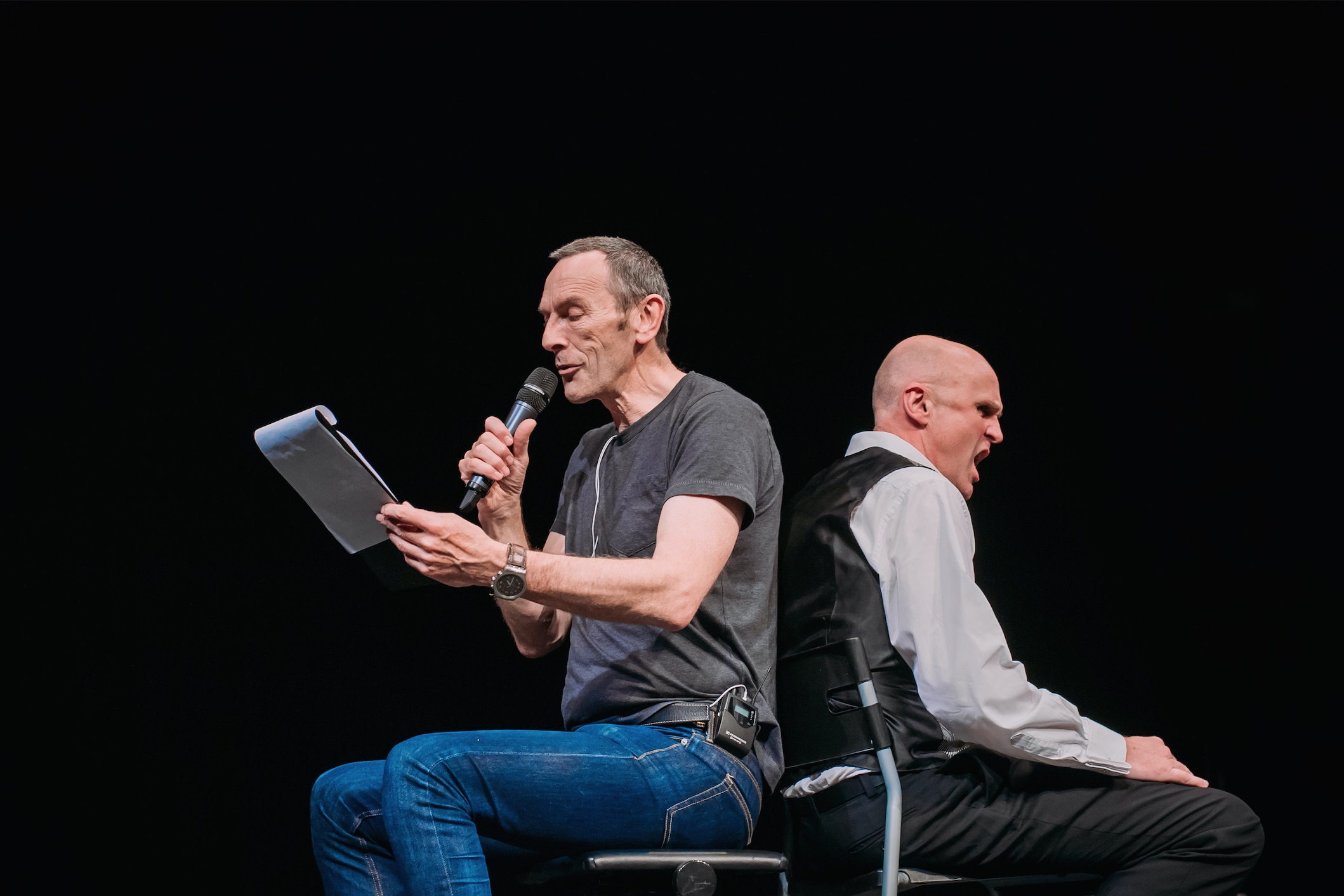 The production is rough and raw: the stage holds only the technical elements that are essential to run the show, and the props are simply chairs and a piano stool. The play takes its name from Michael Craig-Martin’s An Oak Tree, a visual artwork in which a glass of water is an oak tree. On the stage, we see an actor who may not quite fit their role transform previously unseen lines of into an emotive and complex narrative.

Crouch is ever-present on stage, and the printed version of the script shows the pains he takes to ensure the comfort of his second performer. His own character is a hypnotist, and it’s interesting to consider the work itself as a metaphor for hypnosis. You can only fall under hypnosis if you are willing (both consciously and subconsciously) to give yourself up to the power of suggestion, but the question lingers: once initial consent to enter a hypnotic state has been given, how can continuing consent to behaviour performed under hypnosis be provided?

So we must also ask: in theatrical works when a performer has been instructed to perform a piece sight unseen, is there ever a moment when they can step back?

While Crouch’s hypnotist stays with his uninformed performer, the female playwright behind the anonymous monologue Manwatching is neither present nor named. Shown as a work-in-progress, Manwatching is a slightly messy, but delightfully irreverent and joyous, look at heterosexual female desire. Like the Father in An Oak Tree, the performer in Manwatching also encounters their lines for the first time on the night.

We watch in real-time as the male actor discover the words he will be speaking to (at least on the night I attended) a largely female audience. In an intimate, in-the-round performance space, we saw our performer Joe Lycett twist himself around, trying to deliver the piece to everyone in the theatre. Much of the appeal of the work came from a sensation of observing a cabinet of curiosities: we watched the performer squirm.

The bulk of Manwatching feels like little more than some late-night fringe fun, with both the writer’s anonymity and the actor’s lack of preparation left unexplained. In the final quarter, though, the writer abruptly shifts the direction of the piece, dramatically altering our context for everything that came before.

How would you react to these words, she asks, if they were spoken by a woman and not a man? How would her career be impacted if you knew her name? Would she ever escape the label of the playwright who wrote that sex play?

In this context, the unprepared man must give himself completely over to the woman’s words. Though theatre is an art form where men continue to hold a disproportionate amount of power, here a woman takes control – but only while she stays in the shadows, only while she speaks through a male body.

The notional of authorship is also explored in Tonight I’m Gonna Be The New Me – and not just while Jess is instructing her audience in precisely how to respond to her questioning. While the piece is credited to both Latowicki and Tim Cowbury, the work frames itself as a script written by ‘Tim’ for ‘Jess’ to perform. If Manwatching was deliberately provocative in giving a woman’s words to a male performer, The New Me intentionally presents itself as existing within the gendered norm: here is the male playwright, allowing his female creation to have a voice, in a story where he will remain the hero. 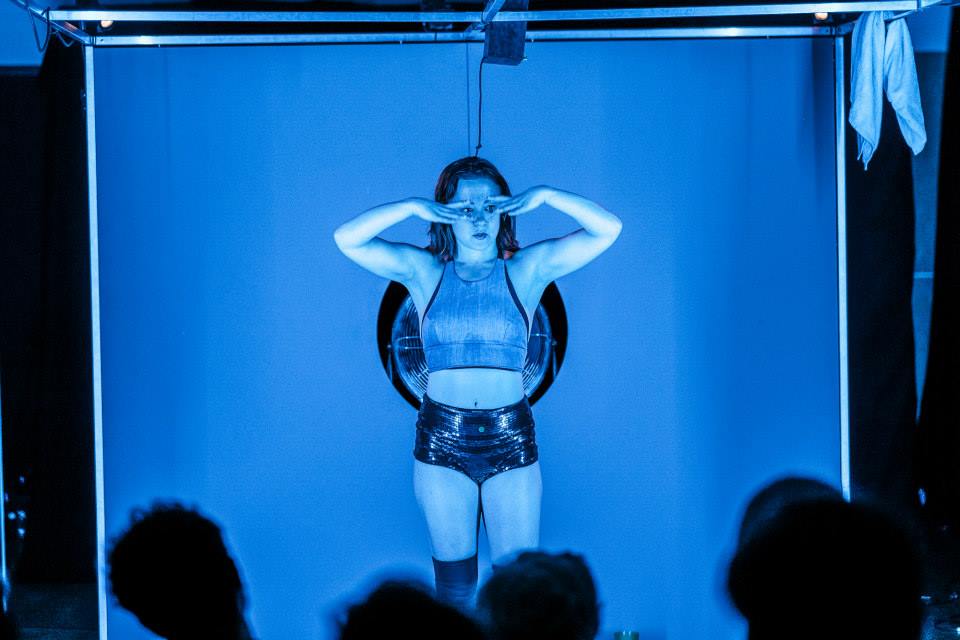 The work is softly and insidiously violent. Jess and Tim bump against each other as they speak – she from the stage; him from the lighting desk – and the boundary between Tim’s script, and Jess’s defiance towards it, gradually grows, until you are no longer sure who is the owner of the action.

‘Say one in 1440,’ she instructs an audience member. ‘One in 1440,’ comes the response. This deliberate, overt act of putting words in another’s mouth is a smaller action than the unseen scripts of An Oak Tree and Manwatching, but is motivated by a similar impetus: forcing us to consider how theatre is constructed, and whose voices we are actually hearing.

We watch performers onstage or members of the audience perform with a degree of spontaneity and truth that can only exist when scripts are previously unread, the rehearsal room unseen. But this spontaneity also reminds us just how tightly crafted theatre is, even when it’s unrehearsed.

Tim Crouch’s An Oak Tree played at the Traverse Theatre for the Edinburgh Fringe and tours to Bristol September 15 – 19, and Coventry November 17 – 19. More information and tickets. The script is available from Readings.

Royal Court Theatre’s Manwatching played in the Earlier/Later series at Paines Plough Roundabout theatre at Summerhall for the Edinburgh Fringe.

Made in China’s Tonight I’m Gonna Be The New Me played at the Out of the Blue Drill hall for Forest Fringe, and plays at Soho Theatre, London, until September 26. More information and tickets.