Escaping The Wolfpack: Inside and outside the screen 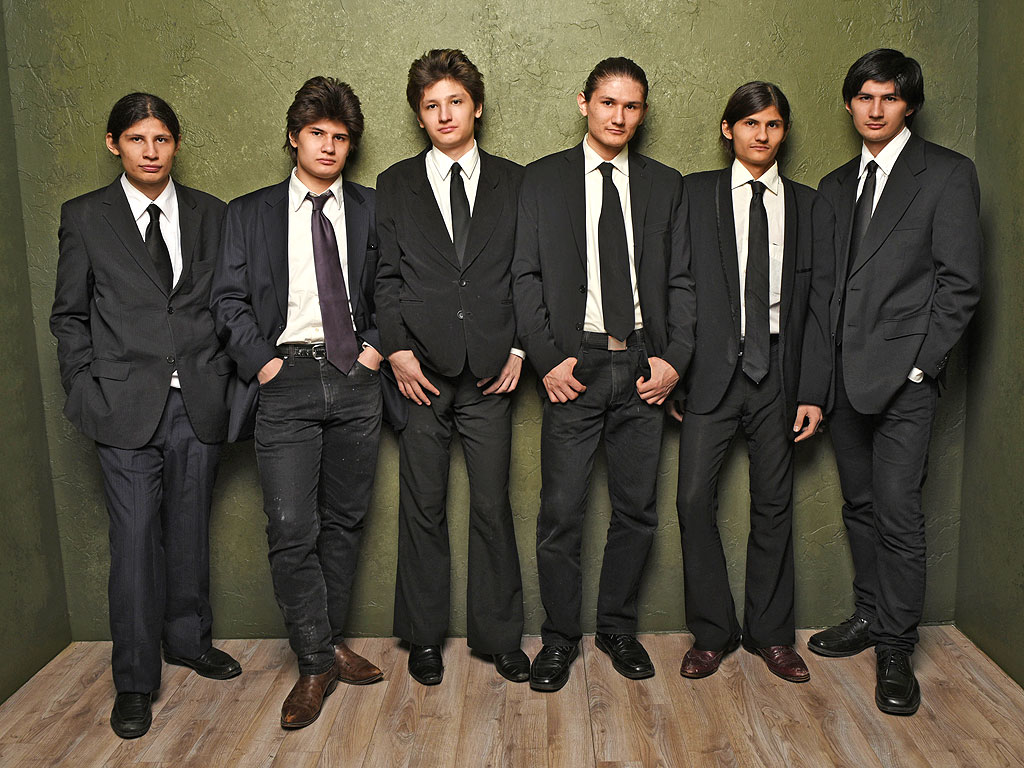 ‘If I didn’t have movies, life would be pretty boring,’ one of the Angulo brothers says early in The Wolfpack.

That’s a relatable sentiment, but when he adds that without movies ‘there wouldn’t be any point to go on,’ things take a darker turn. As Crystal Moselle’s intriguing documentary unfolds, just what is at stake for him and his brothers when watching movies gradually emerges.

The Wolfpack introduces us to the six Angulo brothers – Bhagavan, Govinda, Narayana, Mukunda, Krsna, Jagadisa – who along with their older sister, Visnu, were kept virtual prisoners for 14 years in their Lower East Side apartment. Their father, Oscar (a Peruvian adherent to the Hare Krishna faith), moved the family to New York in 1995, but hearing gunshots fueled his paranoia about the evils of America. And so he closed the door and limited his children’s contact with the world outside. The boys were home-schooled by their mother, Susanne, and in between maths and history lessons swallowed a steady diet of film from a collection of over 5,000 videos and DVDs initially curated by their dad.

More than a captivity narrative, The Wolfpack is a film about the influence of cameras and screens. For the Angulo brothers – now aged 16 to 23 – movies were an escape from their own strictly circumscribed world into a vast, seemingly limitless one. Long before they stepped outside their apartment, movies revealed the world around them and showed them how to live in it. Likely to be some of The Wolfpack’s greatest attractions for many viewers are the brothers’ sophisticated reenactments of Reservoir Dogs, Pulp Fiction and The Dark Knight Returns, complete with elaborate costumes and props made of cereal boxes, foam and yoga mats. These ‘home movies’ staved off boredom and fuelled their creativity. But ultimately they are among The Wolfpack’s less interesting features. 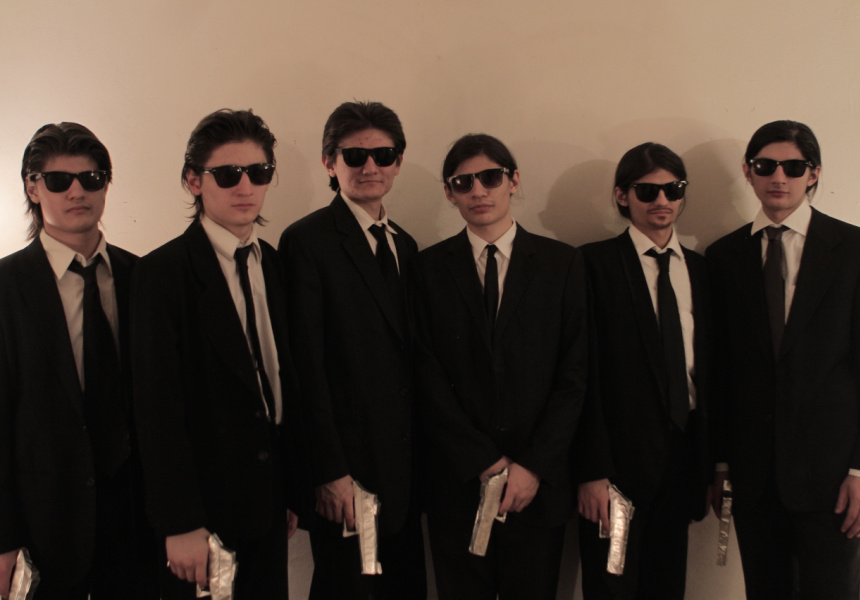 The Angulo brothers paid homage to Quentin Tarantino by acting out Reservoir Dogs in its entirety.

It’s the family dynamic, which emerges gradually, that ultimately resonates most powerfully. It did for Moselle, too, when she began filming five years ago. As she told me, ‘I had no idea what was happening for 8 months.’ The Angulo brothers’ world collided with hers during their first week venturing out as a group in April 2010 (after an earlier lone wolf escape by Mukunda). Moselle says that when she passed the six brothers walking down the street, she was intrigued by ‘the way they looked, incredible, all wearing black,’ so she followed them and introduced herself as a filmmaker. When they expressed their own interest in making movies Moselle gave them her phone number, and offered to show them her cameras and to help out if she could. She initially entered the family’s apartment as a friend – with no opposition from the overprotective Oscar – to shoot a behind-the-scenes film of the brothers making movies. Moselle explains, ‘I always knew I wanted to do a project with them; I just wasn’t sure what it was going to be.’

Freedom and films are inextricably intertwined for the Angulo brothers, and we are encouraged to walk away from The Wolfpack believing in cinema as salvation. Yes, films can be liberating, and can enable viewers to forge connections with the rest of the world. Cinema promotes greater knowledge of others and of ourselves; it can change, for the better, what we think, how we feel, and how we see everything around us. But it’s too reductive to dismiss The Wolfpack as a rosy love letter to the transformative power of cinema. The film’s attitude to screen culture is, I think, a more complex one, especially when one considers the way Oscar helped to shape the boys’ relationship to cinema. Oscar is a man deeply afraid of a corrupt America, yet completely enthralled by Hollywood and celebrity culture; a man disturbed by the violence on his doorstep, but who permitted his very young sons to watch the very adult Blue Velvet; a man who prevented them from interacting with other people, but encouraged them to find a role model in Michael Corleone.

It seems that Oscar is willing to overlook many of America’s ills for proximity to the fame machine. Additional home footage shows some of the boys as very young children playing homemade cardboard instruments, a sort of ready made band, while Oscar circles the periphery, ringmaster and wannabe impresario. As teenagers, they have real instruments; as Bhagavan tells us, ‘If we could get a record contract and play music for albums, that’s different.’

Oscar has never worked in America, refusing to be ‘a slave to society’ and the system. But at the prospect of celebrity, all of Oscar’s paranoia and skepticism seems to wash away. For him, that part of the American system is clean.

Oscar’s lack of hostility towards a stranger, Moselle, entering his space, might be attributed to his understanding of the power of the camera. She’s a filmmaker, after all – not a social worker. As Moselle explained to me, ‘I think that he’s an opportunist that way. He wanted to come to New York, and he wanted his kids to be famous, as rock musicians. Now they are making films and they are getting fame, and he’s almost taking credit for it.’

It’s a riddle for our strange times. After what they have been through, who could deny the Angulo brothers every success that comes their way? The world has opened up to them and embraced them. The brothers have toured internationally to promote the film and have started a company, Wolfpack Productions, to pursue their creative interests. They are, so to speak, living the dream.

But there’s also something murky and a little naïve here: something about the role of the camera in telling a story, and, more importantly, about how people behave when it is turned around and pointed back at them. In the age of reality television and selfie-sticks, we know that cameras can effortlessly capture reality and connect us to others. But they can also distort the appearance of the wider world and our own significance within it.

The Angulo brothers dreamed of a world outside movies, but now find themselves stars in their own film, trapped in the screen. Whatever happens next, life will never be boring again.

The Wolfpack is in limited release from Thursday 27 August. 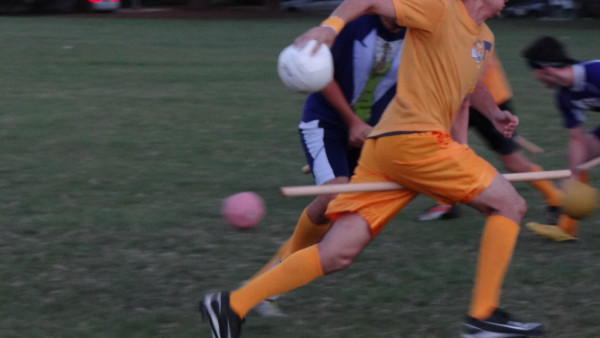