Cold Feet and Hot Little Hands: Abigail Ulman on writing – and not writing – her first book 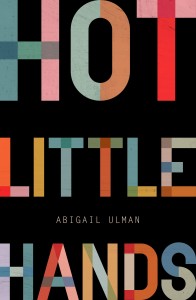 When my short story collection, Hot Little Hands, was half-written, I was fortunate enough to get a book deal for the finished product. At the time, I had six stories, and I only needed to write three more. I breezily told the lovely people at Penguin Australia that this would probably take about six months.

This, dear blog reader, was years ago.

What happened after that – well, what happened after the celebration of that – is that I got completely stuck. Post-book-deal, every time I sat down to try to write something, I felt paralysed by some kind of literary stage fright. I had shown my work to other people before – for writing workshops, and submissions to literary journals and competitions – but I had never before written a story while thinking, This story is going to be published in a book. Or, more accurately, This story idea is nowhere near good enough to be published in a book.

That is not a good mindset in which to write. I knew that I had started and finished stories before, but that didn’t help me start and finish any new ones. I knew I was very lucky to have sold a collection of stories unfinished, especially in a crappy economy, and I knew many writers would kill to be in my position, but those just became more negative things to tell myself in the morning (okay, maybe like, midday) when I sat down at the desk. I was negging myself, reader, and I’m not ashamed to tell you, I was Neil Strauss level great at it.

As the six-month mark went by, taking with it the six months after that, I decided to avoid all the anxiety by doing something else I’m pretty good at: distracting myself. I dated a few people who weren’t right for me, which is actually an even better distraction than dating someone who’s appropriate for you because – and you’ll know this if you’ve ever seen an episode of Keeping Up with the Kardashians – misunderstandings can take up A LOT of time. I got a job at a boutique that sold, like, driftwood and sailors’ teeth, and I took up a few non-literary writing jobs to pay for all the cute stripy tops I was buying from work to wear at work.

In between distractions, I couldn’t stop thinking about my unfinished manuscript. I freaked out to my writer friends, who told me they’d been in similar situations and that I’d get it done. I called my mum in the middle of the night; she said she believed in me and I’d get it done. I told the inappropriate people I dated how stuck and scared I was, and they said things like, ‘Hey, babe, that stripy top is hella cute, think they have one in my size?’

My publisher at Penguin, I should say, was really cool throughout this whole time. He asked at one point if they should be slotting me into next year’s schedule, and was totally relaxed, supportive and unworried when I said, ‘um no um um shit sorry no I mean no.’ The pressure, it seemed, was all in my head.

It was only when things reached peak everything that I started writing again: peak anxiety, peak embarrassment, peak taking-too-long. Once I felt like I’d wasted all the time in the world and I’d spent all my money and everyone had given up on me and there was nothing left to lose, I started to write. I can’t say this part of the process was without anxiety, but it made me feel less out of sorts than I had in a long time. This is the thing about being a writer: even if you’re finding it excruciating and don’t want to do it at all, you won’t feel like yourself again until you do.

These days, the book is not an albatross, an anxiety attack, an unfulfilled contract, or a bunch of documents on my computer. It’s finally an actual book. And, these days, there’s not a moment that I don’t feel consciously and wholeheartedly grateful, surprised and overjoyed that it is finally out there.

When I was younger, I wanted to be a wunderkind. I looked at writers like Zadie Smith, Jonathan Safran Foer, and Nick McDonell, and I was desperate to publish my first book by the age of 23. I can’t exactly remember why that was important and I don’t know why 23 – maybe whichever not-right-for-me person I was dating back then was really into Michael Jordan – but that was the dream.

Now I don’t care that it took me longer than that, and I’m actually pretty glad that whatever overblown novel I was working on in my late teens, early twenties wasn’t seen by anyone but me and a few unlucky professors. A Smith-Foer-McDonell I was not. Now I’m happy to be a poster child for another kind of writer – the kind that is filled with self-doubt and anxiety and most of the time believes that they can’t overcome all the odds in their life and the doubts in their mind. And then, despite and against and instead of all that, they push through till the work’s done.

So, dear blog reader, if you are currently feeling stuck with a project, if you want to be a writer but you don’t know if people will like what you’re doing, if you’re 24, 47, 68, and you think it’s too late to start so what’s the point, just know that one day you could be on the other side of that doubt, marvelling at the fact that you actually frigging did it. You could walk past Readings and spot your book looking all shiny and happy next to its new book friends in the window. Your book could be chosen to be the next Kill Your Darlings First Book Club pick (6.30pm 28th May – come along)! You could be sitting here, like me, at 11.45 on a Wednesday night, listening to the early winter Melbourne drizzle outside, eating strawberry and cream jelly lollies well past the point of nausea, and writing a blog post that will be on the internet forever and that no one will ever pay you for. And I hope, like me, that if and when that happens, you’ll be stoked as hell about it all.

Abigail Ulman will be in conversation about Hot Little Hands at the Kill Your Darlings’ First Book Club on Thursday 28 May at Readings Carlton. Further details can be found here. RSVP to [email protected] 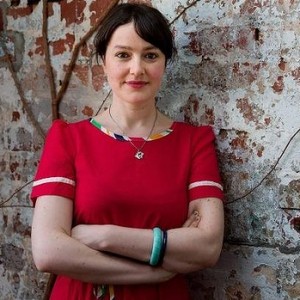 Abigail Ulman was born and raised in Melbourne. She has a Bachelor of Creative Arts from the University of Melbourne/VCA and was a recent Wallace Stegner Fellow in Fiction at Stanford University. Her work has appeared in New England Review, Meanjin Anthology, New Australian Stories, and elsewhere. Hot Little Hands is her first book.