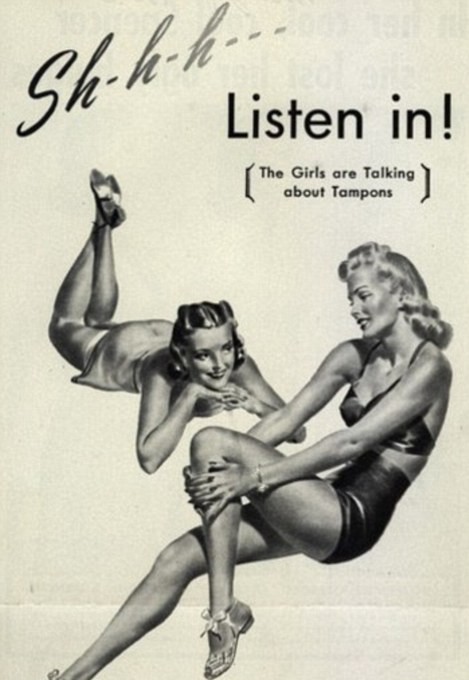 If you have a mother or a sister or a female friend or a female colleague or know about the existence of women or accept that they are real, you probably know someone who has menstruated. If you haven’t heard of menstruation, hello Brendan Fraser from the movie Encino Man, congratulations on learning how to read. If you have heard of menstruation, you would know that it is an essential process in a little tiny thing called the EXISTENCE AND CONTINUATION OF HUMAN LIFE, and it is something that most (not all) women experience for about five days every month for a large part of their lives. It is a topic (besides shopping, lol) that women think about frequently – not only the physical fact of having a period, which is annoying, uncomfortable and often has painful side effects, but also in regards to the money spent on sanitary products, and to the time and effort required to control a cycle with medication like the contraceptive pill. Although menstruation looms so large in our lives and in our wombs, I’m regularly surprised at how rarely it is openly discussed and at the reactions it generates. Often, when a woman does dare to mention it, her period is treated as though it were the Babadook.

On the topic of scary things, I have learned that there are a lot of horrifying things about the phenomenon of Fifty Shades of Grey. The origins of the book, the writing, the dialogue, the content, the message, the success, the fact that your mother and father might have read it and enjoyed some special time together afterwards, the everything. Recently, however, a wave of relief swept across the seas of Twitter when it was revealed that the movie adaptation did not include one of the book’s most infamous scenes – Christian Grey removing a tampon from the vagina of Anastasia Steele and throwing it into a nearby toilet. He then proceeds to ‘insert himself’ – ‘ah!’ – and then there is ‘sweet agony’ and he ‘finds her clitoris’, perhaps behind the couch, and then she begins to ‘quicken’, whatever that means, and then ‘oh jeez’ she goes ‘flying high’, which I guess is what happens when heterosexual women have orgasms (which actually explains a lot about why women put up with men).

The tampon scene has been repeatedly described as ‘gross’ and ‘disgusting’. Confusingly, people are using these terms not in relation to the depiction of heterosexual sex, but rather to the description of the tampon removal. They are SO RELIEVED that they don’t have to be confronted in the cinema with the nauseating idea that a man and woman having sex might have to deal with ~shock horror~ a tampon. There is still discomfort surrounding the portrayal of women’s sexuality, and lifelike imagery of a bleeding female body is not palatable in a mainstream film.

It’s not only at the cinema while chomping into their choc-tops that people want to escape into a fantasy world where menstruation does not exist. They also don’t want to be confronted with it when they see stand-up comedy. The occasional period jokes female comedians perform in their stand-up are often described as ‘hacky’ or ‘unnecessary’. People don’t even want to see realistic periods in ads for period products, and these still largely shy away from any kind of accurate portrayal of women’s bodies. Instead they focus on kittens playing with tampon-mice, or boyfriends who stick pads on themselves and pretend to be superheroes. None of the inconvenient and often-messy aspects of menstruation are depicted.

Society’s reaction to period talk is so vehemently shame-filled that many women believe periods are something that must be hidden from the general population. Women have sent me private messages on Twitter with period jokes or thoughts that they don’t feel comfortable sharing publicly. Women in offices everywhere go through a series of complicated ninja and parkour moves to make it from their desk to the bathroom without anyone suspecting that they might be holding a tampon. Imagine if Dave from I.T. knew that you had a period!

The stigma has other, more serious, real-world consequences. Women experiencing homelessness often struggle with the practicalities of menstruating when they’re in situations without access to safe or sanitary spaces like toilets and showers. Their access to feminine hygiene products, which are expensive and rarely donated, may also be limited. The topic is so taboo that many people don’t consider there might be a serious need for these products.

It is time for us to start talking openly about periods. If you are a woman who doesn’t have a period for whatever reason, let’s talk about that as well. No euphemisms allowed. Send your Aunt Flo riding out on a Crimson Wave during Shark Week. Let’s destroy the stigma where we can. If men had periods, we would never hear the end of it. There would be no GST on tampons; in fact, drones would probably bring sanitary products directly to your house at that time of the month. Many celebrated male comics talk constantly about intimate things that are important to them, like their dicks. Many male non-comics talk constantly about their dicks, and sex, and semen (a bodily fluid many men who are grossed out by periods still expect women to deal with).

Periods are a big part of women’s lives. If you are uncomfortable, it’s time to get comfortable. Start making period jokes, and carry your tampon openly to the bathroom. Engage in open discussions about something that affects so many of us, so frequently. Anyone who has a problem with that can deal with it. Full stop, period.