Pictures of pictures: Monument Valley and the rise of the in-game photographer As you play through Monument Valley (perhaps the most beautiful, delicately-constructed game now available on mobile) a single faint button hovers in the upper left corner. Tap it, and you’re granted the option to switch from player to photographer, able to zoom and pan across whatever impossible Escherite structure your protagonist is trying to escape, in search of the perfect shot. As I played through ‘Forgotten Shores’, the Monument Valley expansion released last week, I filled my iPad’s Camera Roll with images from the game: stunning pastel constructions ensconced in mist, classical columns twisted like Twizzlers, and upside-down towers that float above polygonal mountains.

I wasn’t exactly sure why I was so obsessed with taking these pictures. I had no plans to share them (the web is already full of crisp, high-resolution shots of all of Monument Valley’s eighteen levels) and I certainly wasn’t capturing them as trophies (the game’s puzzles, while satisfying, aren’t particularly difficult to beat). If anything, what I was taking pleasure in was the act of photographing, and the change of perspective it afforded. In ‘camera mode’ in Monument Valley, the player is invited not to view each stage of the game as something to be conquered, but to appreciate each landscape on an aesthetic level. Ken Wong, Monument Valley’s lead artist, has stated that it was his intention for every screen of the game to work on three levels: ‘on an interactive level… as architecture, and… as a graphic composition’. Monument Valley is far from the first game to offer a dedicated photographic mode. Over the past couple of years, big-name Triple-A blockbusters like Grand Theft Auto V, The Last of Us: Remastered, and The Legend of Zelda: Wind Waker HD have all included the ability to shoot in-game ‘selfies’, or to capture sophisticated landscape shots that can be shared online. The Playstation 4 controller goes so far as to feature a dedicated ‘Share’ button on its underside, enabling users to upload screenshots (and video clips) at a tap.

For developers, enabling the sharing of static screenshots is almost a no-brainer, a relatively safe way to actively involve the player in the viral marketing of the games they’re already invested in. By encouraging players, through dedicated photo-taking modes, to compose shots that are either aesthetically pleasing or have some kind of emotional pull, developers can ensure that the kinds of images that are disseminated are more likely to show their games in the best light.

The now-fashionable substitution of the term ‘in-game photography’ in place of ‘screenshotting’ seems to encourage players who engage in the practice to re-conceptualise themselves as photographic artists. This makes sense: players are more likely to enjoy capturing images from a game when doing so is considered a creative act. However, presenting screencapturing a game as a form of camera-free ‘photography’ gives rise to a conceptual issue. If the ‘photographer’ is moving through, and capturing, a world created entirely by others (and which exists entirely in the form of code), then who exactly should take the credit for any images created? 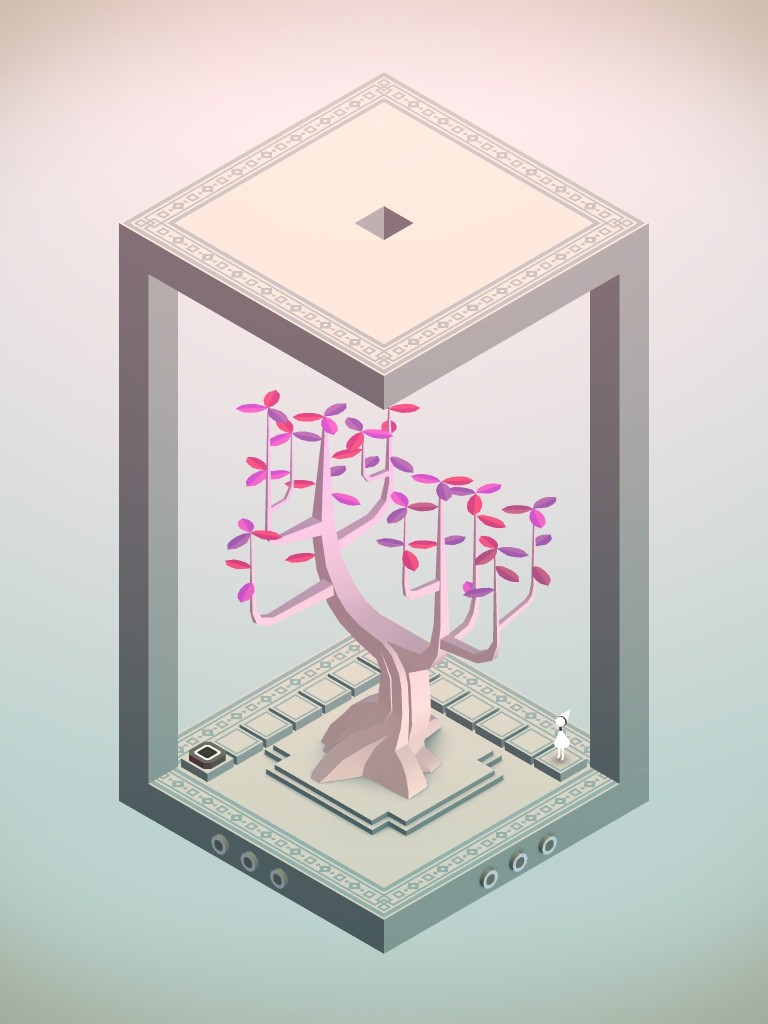 In terms of Monument Valley, a stylised game in which the ‘photo-mode’ is rudimentary, all praise for images captured tends to flow away from the player-photographer and back to the game’s developers – only a fool would consider uploading a screencap of a Monument Valley level and attempt to claim that image as their own artistic work. But in the case of a more complex game like The Last of Us, which provides a vast world to explore and advanced ‘camera’ options, questions of artistic ownership become more fraught. Recently, for example, TIME employed a war photographer to document the game, with the images captured presented alongside an accompanying essay in which the photographer explained his process: ‘I tried to mess with the photos a little. Put unimportant information in the foreground. Tilt the camera. Pull back too wide. I’d gravitate towards darker situations, or spots with slivers of light, both environments I love to shoot on the field.’ Tellingly, the screencaps were credited directly to the photographer, and perhaps rightfully so: the work involved in moving through the digital space, working with the virtual camera, and eventually processing the in-game images, seemed comparable to the effort involved in capturing a day of combat in Iraq.

Recently, a large developer attempted to enforce copyright on user-created in-game video. But when studios bake photography modes into their games, they seemingly imply that the player is granted the right to claim some kind of ownership over whatever they produce. After all, you can’t encourage your audience to create art using your game if you’re not willing to entertain the idea of crediting them as the artists. ‘Serious’ screenshotters are almost certainly just as invested in their craft as genuine photographers, even if they happen to more obviously utilise the work of others as a base upon which to build. Perhaps, though, the strangest and most important implication of the rise of ‘photo modes’ in videogames is what they do to regular players attempting to move through their favourite game worlds. On the one hand, knowing your character has access to a virtual camera they can pull out at any time encourages the player to pay deep attention to their environment. However, the existence of the camera also seems to work to direct the player’s attention away from the task at hand… in search of a totally killer snap to upload to Instagram. As Brendan Keogh noted when playing through Grand Theft Auto V, exploring the game’s world feels even ‘more real’ when you’re continuously documenting it with ‘low quality, mundane photography’. The tradeoff is that our sometimes-crippling obsession with continuous visual documentation now follows us everywhere we go. Not only do we feel the urge to take pictures of the world itself in a bid to better fit it within the constraints of our iPhone screens, we’re increasingly able to indulge our urge to take pictures of the pictures within our screens, too.