Clipped: What would Susan Sontag say about always-on cameras? 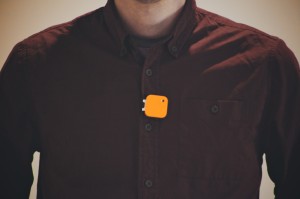 As I write this, a tiny camera clipped to my shirt collar is silently taking a picture every thirty seconds. At the end of the day, I will plug my Narrative Clip into my MacBook, and it will upload half a gigabyte of images to the Cloud. In a decade, providing Narrative’s servers are still running, I will be able find this exact moment and scrub through it. The only gap in my (visual) digital memory will be the half a minute between pictures.

This is an experiment. I’m not sure I think my life is important or interesting enough to warrant taking over a thousand pictures a day, but what if this attitude – that taking ‘too many’ photographs, whatever that means, is inherently narcissistic – is simply based on anachronistic notions of what a photograph is or should be? What if the photographs I’m taking with the Clip are different kinds of photographs entirely to those I take with my SLR or using the VSCOCam app on my phone?

Susan Sontag would understand. She’d have a lot to say about Instagram and Snapchat and the Narrative Clip, and about what it means that most of us now carry a camera on our person capable of capturing and storing hundreds of thousands of images on one great almighty ‘roll’. In 1977’s On Photography, Sontag repeatedly refers to ‘The Inventory’, a collection of every photograph ever taken since the first ever exposure in 1839. In ’77, ‘The Inventory’ was a metaphorical device. Now, we’re moving toward a world in which every photograph we take is networked to every other photo – face-tagged, geotagged, and machine-readable. The Inventory is now real.

As Sontag made clear in On Photography, we’ve grown so familiar, over such a relatively short space of time, with the ‘point and shoot’ mode of picture-taking that it seems natural, but it isn’t. In fact, it’s a particular and peculiar way to move through the world that makes little sense when held up to scrutiny. For example: why do we feel so compelled to spend our holidays snapping pictures of landmarks when, as Sontag points out, virtually identical photographs are already readily available in the networked Inventory? Why do we ask our subjects to line up and strike contrived poses instead of capturing life as it is lived? And, perhaps most curiously, why do we feel some things are worth taking pictures of and others are not?

Perhaps this is why I’m taking a chance with the Clip (mine’s bright orange, a colour that does a very good job of drawing attention to itself). Technologies that change how we think about photography don’t simply change how we share our photographs; they shape, often on a profound level, how we see. When Instagram launched, we began forcing our lives into square frames. When we signed up for Snapchat, we had to consider what kinds of photographs might be worth capturing but not necessarily worth preserving.

Much has already been written about the etiquette and privacy implications of always-on cameras like the Clip and Google Glass, but less has been written about how these kinds of cameras might change how we see, which was always what Sontag was most interested in. If we’re constantly recording with discrete gadgets, for example, it may be that the concept of explicitly ‘taking a photograph’ is gradually made obsolete. Sontag noted that taking a photograph is alienating: by picking up the camera and lining up the shot, what you’re really seeing is the photo-to-be instead of the world as it is (this is particularly true when you’re toggling through live view filters on your phone, never seeing what you’re looking at, except through the hazy glow of ‘Toaster’ or washed out tones of ‘Earlybird’).

We’re not good enough at understanding how our memories work to understand what constitutes the ‘best’ way to approach photography. Taking and sharing pictures is inherently strange, representing a privileging of certain moments over others and a certain way of looking at the world. Shifts in the way we take and store and share can seem worrying, until we step back and recognise that all forms of photography are mysterious and unsettling. Are two frames a minute, for ever and ever, really any stranger?