Reflections from the Australian red carpet 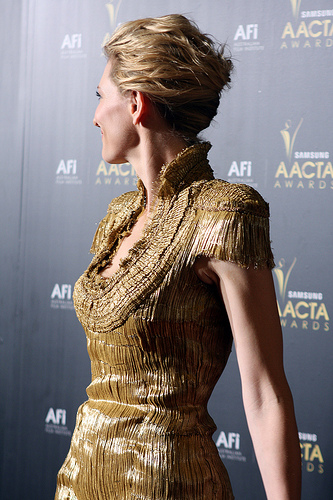 I’ve decided I need to go to Australia. I don’t know how, and I don’t know when, but every time they have an awards show I think, “It is my destiny to know who these people are.” (I mean, other than Cate. I am familiar with her at this point.) I just need two weeks on a beach with some local trashy magazines and I will be good to go. – Snarky US fashion commentators Go Fug Yourself

I spent last week in Sydney covering Australian film and television’s biggest annual awards, the AACTAs. You probably heard about them, and the fact that they turned into a rather embarrassing BazFest, with The Great Gatsby winning 12 of the 14 film awards (as well as an extra one for visual effects), and the televised broadcast turning into a song and dance celebration of director and lover-of-sequins, Baz Luhrmann. Many fine films missed out, and the competition seemed terribly unfair, with Luhrmann’s $120+ million spectacle thrashing innovative low-budget fare like The Rocket, Mystery Road, Dead Europe, The Turning and Satellite Boy.

But enough with the local industry hand-wringing; let’s get serious. Red carpets: why do we love them? And what does the Australian red carpet experience tell us about our national screen industry?

The US-based Academy Awards (the ‘Oscars’, next on 2 March) first began using a red carpet in 1961, with colour broadcasts first taking place in 1966 (the first B&W broadcast was in 1953). In a mere 50-odd years, the international media and its consumers (i.e. us) have become addicted to the red carpet’s vacuous pleasures: glimpses of gleaming and starved celebrities in stupendous gowns and penguin suits, offering idiotic sound-bite interviews about ‘who’ they are wearing. This year’s Screen Actors Guild (SAG) Awards even had a ‘mani-cam’ – a mini red-carpet box for celebrities to run their hands over so we could get a good look at their fingernails. Deep.

Arguably, part of the cruel pleasure of a red carpet is seeing what the celebs look like without a script, without special effects and sans airbrushing. It’s a form of revenge to see global superstars whose images are used to sell us everything from coffee to watches to moisturiser, suddenly ‘naked’ and inarticulate, albeit with spray tan and diamonds.

The SAG Awards red carpet was also notable this year for Cate Blanchett’s cheeky call-out of the photographers who ran their cameras up and down her body. She leant down, and with a pained smile, said, ‘Hey, do you do that to the guys?’ The video loop went viral, a high-five for anti-sexism, though as some commentators pointed out, this was a bit rich coming from Blanchett, who earns a fair whack from her fashion and beauty endorsements.

Significantly, Blanchett was one of the only real ‘faces’ (in international media terms) at last week’s AACTA Awards. ‘Resplendent in a gold and bronze Givenchy sunray-pleated gown, cleaved dramatically to the waist’ (see how easy it is to write this stuff?), Blanchett turned up like a trouper to support her home crowd. Along with fellow Oscar-winner Geoffrey Rush, Blanchett gave a bit of dazzle to an event whose big moments included Sam Worthington falling off the stage, Lara Bingle looking vacant as a joke went over her head, and Baz Luhrmann half-threatening to film War and Peace (War+Peace?). The fact that three of the acting award winners (Leonardo DiCaprio, Joel Edgerton and Rose Byrne) were unable to accept their gold-plated statuettes in person, further underlined the message that, in terms of the international film industry, life is elsewhere.

It’s human to love beauty, and it’s natural to love looking at a spectacle. That’s part of what the movies are about, after all. But when Australian film meets the red carpet, it’s a little bit threadbare. And in a way, that’s part of its charm and authenticity.