MUBAs and Shakers: The 2013 Most Underrated Book Award 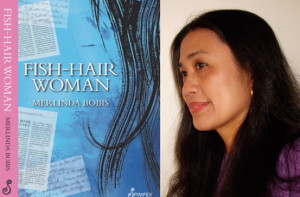 The 2013 winner of SPN’s Most Underrated Book Award: Fish-Hair Woman by Merlinda Bobis

The Small Press Network hosted the Most Underrated Book Awards of 2013 last Friday night. From the start, the equivocal nature of ‘underrated’ was under the microscope. As ebullient MC Mary Masters put it, the award could be interpreted as the literary equivalent of ‘that shirt is divine on you. Makes you look ten years younger’. Or, as nominee Ginger Briggs put it, ‘it’s like winning the award for the prettiest girl who was never invited to the prom’.

So what does it mean to be ‘underrated’? The four titles nominated–Briggs’ Staunch, Annabel Smith’s Whisky Charlie Foxtrot, Anna Solding’s The Hum of Concrete and Merlinda Bobis’ Fish-Hair Woman–were not critically overlooked. Solding’s novel has been nominated for six awards. Staunch was described by Waleed Aly as ‘An extraordinary book, the writing is brilliant…it is very hard to put down’. The Australian said of Smith that she’s a writer ‘with something to say about how to live, and the energy and pluck to say it’. Bobis re-imagined the night’s winner, Fish-Hair Woman, into a play (River River) which has toured internationally and which Bobis gave an evocative taste of on Friday night.

But the relationship between critical praise and book sales can be tenuous. And without sales writers scrabble for a slice of the anaemic funding pie allocated to literature or write in the hours left from other (paid) work. Masters argued that all four books deserve to be read by an adoring Australian public. So where’s the love? And what does it feel like to be the object of the withholding? As Smith recently blogged:

Sometimes the grinding sense of being perpetually undervalued makes it hard to be gracious about the success of others; so that when I saw Graeme Simsion’s The Rosie Project on the shelves at Coles, instead of thinking ‘Good for him’ I felt like throwing myself onto the floor of aisle 3, screaming ‘Why can’t it be me?’

Why can’t it be any one of the straight-up awesome Australian writers who battle for readerly love? Part of the answer is marketing. Writing terrific stories does not make you a terrific marketer. If the essence of great storytelling is authenticity then the two skills can be directly oppositional. And if you’re a female writer trying to get noticed, and have the ‘temerity’ to put yourself forward, then prepare for the savagery of the interwebz. (Nor if you’re a female writer can you rely on others to do the marketing for you since reviews are slanted towards male writers at a vertiginous gradient.)

Marketing can also be a beguiling distraction that eats into writing time. As Solding cautions ‘it is important to remember that social media marketing is there to promote your serious writing. Don’t let the shiny things on the internet distract you to the extent that your novel never gets written’. Smith actually uses a kitchen timer to call time on marketing activity and marshal her back to the real business of writing.

So does the problem lie with readers? Are we too lazy or time poor to seek out the books shelved elsewhere than the (mostly overseas) bestseller stand? I’ve long suspected that for Gen X readers like myself, the shitful way Australian literature was taught in the 80s and 90s is partly answerable for a reluctance to buy Australian books. (I used to think of Ozlit as ‘damper prose’: stolid and indigestible but undeniably Australian).

It’s time for us to get over it. Time for readers to do some of the heavy lifting.

So here’s twelve suggestions, in no particular order, to see you on your way*:

* Yes, this list has a clear gender bias. Refer to paragraph above on gender and literary reviewing.

** Yes, Farr is a Kiwi. But she’s published by Fremantle Press so I’m going with it.

***Yes, this is shameless self-promotion. Refer to paragraph above on marketing.

S.A. Jones is an essayist, novelist and commentator. She holds a PhD in history and was recently named one of Australia’s 100 Women of Influence. Her new novel, Isabelle of the Moon and Stars, is being published in 2014.

KYD No. 27 Teaser: ‘Fatness, Pop Culture and the Need for Inclusion’ We’re looking for a Publication Manager