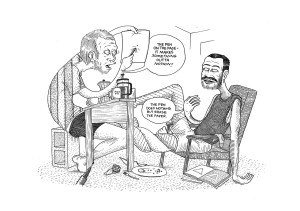 It could have been awkward. Well, I mean, it was. Meeting Melbourne comic artist Sam Wallman at a café I went the handshake and he went the European greeting. It became an odd mix of both – stooped shoulders and curling arms in a handshake / air kiss merge. My awkwardness wouldn’t be present in Wallman’s comics. But the rubbery-ness of our exchange – of my flailing left hand and zigzagging head – that was a little reminiscent. While very human, Wallman’s characters can twist the bounds of our anatomy. Arms make S shapes, fingers wobble impossibly and mouths poke clean out of their faces. In the title panel of his latest book Pen Erases Paper, Wallman draws himself and another young man, their legs twisted tightly as they ponder a philosophy of drawing.

Despite their characters’ bendable anatomies, Wallman’s pages reflect real life. I’m grateful to hear him use the word ‘activism’ (although it wouldn’t be right to exclusively describe his stories this way). Yes, there’s a sense of justice in many of Wallman’s tales: on being queer, considering racism, rights and working in ‘the welfare industrial complex’. But as the story it’s alright illustrates, Wallman’s take on life is a forgiving one. In the second panel of this comic, two cyclists ride through a once-forest of tree stumps. ‘Fucking forrestry workers,’[sic] one says. ‘They’re just afraid they’ll lose their livelihood,’ the other responds.

‘Everyone’s dealing with their own things,’ Wallman says to me when we discuss a comic that considers the new symbolism of the Southern Cross. ‘I wanted it to be a bit poetic and not laughing at the person. We should want to know why people have Southern Cross tattoos instead of ending the conversation at, “Why would you?”’ 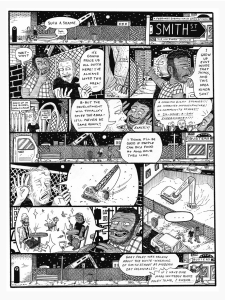 Pen Erases Paper is paged with comics that demonstrate Wallman’s sensitivity to other perspectives. not one world quite literally does so (‘‘s many worlds az eyes’ it concludes). smith street has Wallman bemoaning the gentrification of Collingwood. Meanwhile his friend who grew up in the commission flats nearby puts forward a different perspective.

Both Wallman’s vision and his voice are infused with a hearty humour that has me laughing out loud even after multiple readings. faggot perks for perky faggots lists said perks (and makes some genuinely compelling points). Not all the comics are funny though, who is tough? ponders queer life in a hetro world. ‘I always found it strange that queers get laughed at for their perceived weakness,’ it starts.

Wallman always drew as kid, but he never considered making comics until he travelled through the Middle East just a few years ago. ‘I didn’t even take a pen or paper with me on that trip. But it was pretty lonely so I just started drawing on napkins all the time,’ he says. The napkins were reproduced in a book, Brain Furniture and Wallman has been self- publishing since. His work is very polished – too polished, I put to him, for someone who hasn’t formally studied. ‘It’s my dirty dark secret that I studied advertising at university and finished it,’ he says. ‘I thought I could use the skills for good. I thought maybe the Left needed more people with those skills. But I don’t have it in me really.’ Yet Wallman recognises the benefits of that degree. ‘It taught me how to communicate ideas and visually represent stuff, to try to get people on board with you a little.’ This education certainly explains the complexity and quality of his compositions. His pages play with perspective, shape, and can document in tremendous detail. Panels come in semicircles, triangles and rectangles, small ones sit on larger ones and visual-storytelling takes us skillfully through complex sequences.

‘I like to see comics where people are exposing themselves – showing some fragility, confusion or weakness,’ Wallman says. He often admits confusion himself and notices double standards without prophesying in his own stories. ‘I don’t think it’s bad to have an opinion, but I think it’s good if you can admit the darkness is a little bit true, or that you’re confused.’

Wallman draws comics to be better understood by people, and to better understand himself. ‘It’s an easy way to explain myself. I meet people and they kind of know me. Like you – we have some sort of connection that we wouldn’t have if you haven’t read my book. And that’s kind of beautiful,’ he says, smiling.

Indeed. When it’s time to leave the café I don’t bother with the handshake and even give him a little hug as part of the air-kiss.

Pepi Ronalds is a Killings columnist. She has been published in Meanjin, Open Manifesto, A List Apart and more. Her blog, Future of Long Form, was an Emerging Blog for the 2012 Melbourne Writers Festival. She’s on Twitter and Facebook, and has a website.

Pepi Ronalds is a non-fiction writer based in Melbourne. She's currently working on a book about resilience and recovery in Japan after the 2011 earthquake, tsunami and nuclear meltdown. Follow her on Twitter @pepironalds.