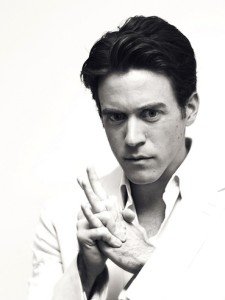 In The Western Canon, infamous American literary critic Harold Bloom lists Tony Kushner’s Angels in America among the works of 26 authors he insists are central to literature itself. Belvoir Street Theatre is currently offering a rare opportunity to see Kushner’s beloved, Pulitzer Prize-winning play (although by now it may be hard to get a ticket).

Subtitled ‘A Gay Fantasia on National Themes’, Angels is a play in two parts: Millennium Approaches was first produced in 1990 while development readings of the second play, Perestroika, were still in process. For those unfamiliar with the drama, the two plays unfold the intersecting lives of a cluster of New Yorkers in the 1980s whose destinies are connected and profoundly shaped by AIDS under the Reagan administration. Prior, played in Belvoir Street Theatre’s production by an emaciated but luminous Luke Mullins, is a 31 year old white Anglo-Saxon gay man with AIDS who is soon deserted by his firebrand leftie boyfriend, Louis Ironson, for whom the discomforts of sickness are too much to bear. Rather than respite, the already Jewish-guilt-riddled Louis is tormented by abandoner’s remorse, and, moral masochist that he is, he takes up with his political antithesis, the strapping Joe Pitt (Ashley Zukerman), a closeted Mormon Republican. In part, Angels is about the conflicts (and coalitions) between strange bedfellows, and in a memorable line, Louis says to Joe: ‘I’m losing myself in an ideological leather bar. The more appalling I find your politics the more I want to hump you.’

As well as the embodiment of Marlboro Man Reaganite Republicanism, Joe is a self-hating queer battling his own moral struggles: with his sexuality, with his acerbic, agoraphobic Valium-addicted wife Harper (Amber McMahon), with his devout Mormon mother Hannah (Robyn Nevin), and with his mentor/seducer Roy Cohn (Marcus Graham), who acts as both paternal figure and abject tormentor and is himself both deeply closeted and also dying from AIDS. The character, based on real-life McCarthyite lawyer and arch Reaganite Roy Cohn is one of contemporary theatre’s greatest creations; as critic Scott Brown describes, he is ‘a magnetic Satan utterly comfortable with his own self-loathing, a master externalizer of self-hate.’

Prior is left to struggle with being very sick as well as visitations from ancestral ghosts, and eventually the Angel (Paula Arundell), who confirms that he is a prophet. Mullins’ vulnerable but lithe body is thrown about, bounces off walls and thrusts up and down in his sick bed like a horny Linda Blair, and in his encounters with these spectral and terrestrial beings, he dances, tumbles and pirouettes around the the stage in minor acrobatics that recall the literal and metaphorical ravages of AIDS on the body of the PWA in the 80s and 90s as it became a media spectacle of fear, disgust, pity and fascination. Prior’s plight isn’t without its good humour though, and his relationship with once-lover and carer Belize (Deobia Oparei) – a black drag queen and nurse working in the AIDS ward housing the dying Roy Cohn – provides ample opportunity for hilarity.

While Prior wrestles with Angels, Roy Cohn dies spectacularly viscerally, attended to and castigated by Belize, and haunted by the ghost of Ethel Rosenberg (also played by Robyn Nevin), whose prosecution and execution for Communist espionage he himself was central to during the McCarthy purges.

As Belvoir Street’s Eamon Flack says in his Director Note, ‘this play, Tony Kushner’s magnificent philosophical soap opera, is BIG.’ Critics frequently remark on the play’s vastness, sprawlingness, its proliferation of themes and generic promiscuity. Angels can feel difficult for some because it is too long, too multiply meaningful and, despite the ease and pleasure with which is may be consumed, its polyvocality makes it seem somehow inscrutable.

This is largely because the play unfolds a practically un-catalogue-able series of oppositions. Among the characters’ struggles are conflicts between forgiveness and retribution, migration and staying put, political ideals and personal desires. Angels references – but also ironizes – Shakespearean romantic comedies and Sophoclean tragedy. Intellectually, it is torn between competing visions of politics as communitarianism and modern Western ideals of individualism. And it doesn’t stop there. Other bothersome binaries spring to mind: beauty and decay, pleasure and plain, homo and hetero, utopia and dystopia, past and present, rationalism and indeterminacy, progress and stasis.

The play is marked by these oppositions: Prior Walter and Roy Cohn are ‘anode’ and ‘cathode’, Belize – the black nurse who is the ‘shadow on the grave’ of the closeted Republican Jew –is Roy Cohn’s ‘negation’. Angels is the paradigmatic postmodern political play: obsessively dialectical in structure, feeling and theme.

In Belvoir Street’s production, the core theatrical device for staging these oppositions is a genially conceived but risky one: the oppositions between the two plays themselves – the two halves of Angels that, in spite of their differences, are now quite unimaginable as separate texts. The production was relatively spare overall, but Millennium Approaches was particularly lean, with the beige tiles of designer Michael Hankin’s set dominating the theatre space. The fantasia emerges with a sparkling, smoking vengeance in Perestroika as the ascent to heaven and the play’s excessive theatrics begins.

The risk of a humdrum first part is exacerbated because Angels was so beautifully adapted by HBO in 2003 that subsequent productions will inevitably suffer in comparison. How can Robyn Nevin hope to eclipse memories of Meryl Streep’s Rabbi or Ethel Rosenberg? By the second act of Perestroika she absolutely does and I completely forgot HBO’s prestige adaptation.

Angels will leave an indelible impression, and one worth savouring for its rarity. Of course, because this play – including its formal innovations, generic experiments and political outré – is now part of our cultural consciousness, it can never make the same impact as it did in the far more urgent, apocalyptic moment of AIDS panic in the early 90s. It nonetheless still has much resonance for contemporary audiences – but not because HIV notifications are on the rise again (as this ABC report blithely suggests). There are far more interesting reasons why this play should be an ongoing source of discussion, least of all is the ease with which, in the years since Angels articulated its very queer vision of the nation, queer politics in the US has been largely co-opted by various nationalist agendas – the most distinct example of which are the rights-based lobbies of the gay marriage and gay military issues.

Looking back on Angels via Belvoir Street’s production, we’re reminded of a difference between these queer movements seeking some kind of rapprochement with the nation, and, for example, black nationalism, which, rather than clinging hopefully to a sentimental vision of the liberal-pluralist future, found the construction of America objectionable and utterly irredeemable. As Belize says to Louis: ‘I hate America, Louis. I hate this country. It’s just big ideas, and stories, and people dying.’

Angels in America at the Belvoir Street Theatre until 27 July.