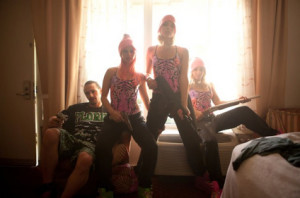 There is a memorable sequence in Harmony Korine’s latest film Spring Breakers where wacked-out deviant ‘Alien’ (James Franco) plays Britney Spears’ ‘Everytime’ on a piano against a sun-kissed backdrop. As he sings, three bikini-clad college girls, sporting bright pink balaclavas and toting shotguns, dance around excitedly. The scene abruptly transitions into a montage of terror and bloodshed when Spears’ sickly-sweet original song kicks in, as Alien and his posse of Disney ‘princesses’ (Selena Gomez, Vanessa Hudgens, Ashley Benson and Rachel Korine) go on a hedonistic rampage.

Emblematic of the whole film, the explosion of high and low culture in this sequence has the ability to elicit everything from laughter to contempt. This is a different kind of spring break: the world has become a series of candy-coloured nightmares, where reality is seemingly devoid of meaning. About to commit a violent robbery, the girls diabolically muse: ‘Just pretend like it’s a video game.’ According to director Korine, Spring Breakers is a ‘hyperpoetic’ film in an era ‘post-everything.’

But what exactly do buzzwords such as ‘hyperpoetic’ and ‘post-everything’ really mean? Is Korine, the enfant terrible responsible for the likes of Kids, Gummo and Ken Park (the last controversially banned in Australia) merely talking in riddles? Ever since postmodernism emerged as a new sensibility in the 1950s, when French post-structuralist Jean Francois Lyotard later declared cultural work wasn’t ‘governed by pre-established rules’, film has been dominated by a self-reflexive playfulness.

The influence of pastiche, intertextuality and general confusion has also allowed filmmakers like Korine to both literally and figuratively go crazy: traditional structures and styles have been subverted and deconstructed with varying degrees of success. Some of the finest examples, such as Pulp Fiction and Fight Club, remain immensely popular because they have complex narratives where signifiers masterfully problematise the validity of interpretation rather than assure it.

But if we have moved past this ‘endlessly contested’ era of postmodernism, where does that leave films like Spring Breakers? Since the beginning of the 21st century, theorists have desperately attempted to classify the current zeitgeist with purposefully obtuse definitions and cringe-inducing titles, including ‘post-humanism’ and ‘post-postmodernism’. Even Bret Easton Ellis, who like Korine, shares a love for creating texts that blur popular culture with nihilistic ambivalence, has dipped into the debate by coining the term ‘post-Empire’. However, like most critics, Ellis spends more time speaking around what this actually means, taking greater delight in sorting cultural icons, moments and artefacts into what he deems pre and post-Empire.

When Korine speaks of Spring Breakers as ‘post-everything’, the provocateur is exploiting film as a medium that has the capacity to extend beyond cultural boundaries, where meaning is always open to interpretation. The notion of college teens going on a spring break vacation is explored in a Baudrillardian context: the girls wander menacingly in an unfiltered Disneyfied reality, haunted by monotony and ‘depthlessness’. Korine is arguably less concerned with the concept of narrative than he is presenting bright images as ‘simulations’, where characters speak in tongues and representation is buried beneath cool surfaces.

Inevitably, critical reaction to Spring Breakers has been polarising: while some consider it ‘a fever dream of teenage kicks’, others have criticised the film for being ‘all surface and sham’. Korine uses the voyeuristic opening sequence to erect ‘spring break’ as an immediate and identifiable signifier: drugs are smoked out of plastic-baby bongs and alcohol is guzzled down by the litre. But as the girls lurch from one act of transgression to another, the signifier is carefully dismantled. A party-trashed room, filled with the sounds of sex and degradation, only offers a glimpse into the savageness of late capitalism that is to come.

The girls’ youthful exuberance in this ‘most spiritual place’ is extinguished after they are locked up for cocaine possession. However, rather than fully understand the consequences of their actions, they make the conscious choice to follow Alien into a far more sinister world, where raging sociopaths lurk in place of topless teens. A larger-than-life drug and rap kingpin, Alien’s dark materialistic desires evolve into a psychotic depiction of the American Dream: the girls who remain by his side do so because he provides them with a life of absolute decadence.

In Spring Breakers, Korine ultimately leaves meaning up to the viewer. Sincerity and irony constantly implode; the real and the imaginary become one. Despite the girls’ repeated declarations, spring break isn’t going to last forever, but by the end of the film, we realise that’s not even the point.

Scott Macleod (@ScottWMacleod) is a Killings columnist, academic, freelance writer (www.scottwmacleod.com) and ardent cinephile. He currently lives in the lovely town of Adelaide, the so-called ‘home of serial killers’.