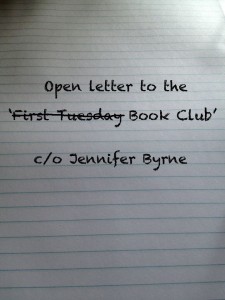 Did you know that if the manuscripts of To Kill A Mockingbird and Catcher in the Rye were pitched today, they would most likely be marketed to the young adult readership? Now, imagine if that were the case and you didn’t review either book on your wonderful program, simply because it had a ‘young adult’ label attached. Think if you never met Holden Caulfield or Scout Finch, and only because they were young people telling their coming-of-age stories.

With that horrible thought in mind comes the reason I am writing to you today. I love The First Tuesday Book Club, but I think your program is long overdue in representing and reviewing young adult (YA) literature. You had such a great segment on Jennifer Byrne Presents in 2012, titled ‘The Harry Games’. It was a really wonderful show that was choc-full of Aussie greats: John Marsden, Melina Marchetta, Steph Bowe and Morris Gleitzman talking all things YA and highlighting what a powerful readership it has become. But now I think you need to present what you preached.

Clearly, your reading audience are already on-board with this idea, as evidenced by your 2012 ‘10 Aussie Books to Read Before You Die’ list. Two young adult books were voted onto that list by your fans: Markus Zusak’s The Book Thief and Craig Silvey’s Jasper Jones. You even said, Ms Byrne that these books being YA didn’t matter: ‘we’ve gone past that stage. We all read all books.’ We do, but your Book Club only reviewed those two because your fans voted for them.

Another book to crack the Top 10 was Australian children’s classic The Magic Pudding, which prompted panellist and Wheeler Centre director, Michael Williams, to note that Australia has a ‘particularly rich tradition’ of wonderful children’s literature. Australia does indeed have a proud literary history, founded on children’s and YA books. It might be nice to pay homage to some classics like They Found a Caveby Nan Chauncy, The Watcher in the Garden by Joan Phipsonor Playing Beatie Bow by Ruth Park.

But don’t think that Australia’s best literature for young people is in the past or only appeals to Australians. The Michael L. Printz Award is an American Library Association literary award that recognizes the best book written for teens, based entirely on literary merit – and Australian authors have a proud history with the illustrious award. In 2009 Melina Marchetta won for On The Jellicoe Road (which is currently being adapted for the big screen). In 2007, Sonya Hartnett was a Printz Honor nominee for Surrender, and Margo Lanagan has twice been honoured, in 2006 for Black Juice and 2009 for Tender Morsels.

But perhaps the most important award lists to pay attention to are those voted by actual young adults, as opposed to their literary gatekeepers. The Inky Awards were created by the Centre for Youth Literature, and are perhaps the most significant YA book awards in Australia because the shortlist is partly chosen by teen judges, and the voting is done entirely by teen readers. The Inkys are the truest representation of what young adults are reading and loving today – and to that end you should definitely review 2012 winners Shift by Em Bailey (winner of the Australian gold Inky) and The Fault in Our Stars by John Green (winner of the international silver Inky).

I am a really big fan of The Book Club, Ms Byrne. But I’m also a lover of young adult literature, and I really think your show needs to start better representing a readership that has long produced some remarkable talent and is responsible for igniting a reading passion in many people, both young and old. Even the New York Times had to create a bestseller list specifically for Young Adult books – further proof that literary institutions are starting to sit up and take notice of YA, and it’s high time you did too!

I’m not saying you should turn the ‘Book Club’ into the ‘Teen Book Club’ (though that would be fabulous!) Just remember that today’s young adult book could be tomorrow’s Catcher in the Rye classic.

P.S. Marieke Hardy may need some convincing on the YA front – after all, she did criticize Zusak’s book by saying ‘it reads like a Young Adult novel. It’s a simple, saccharine way of telling a story.’ Of course, she’s entitled to her opinion. But such a misguided statement would suggest that Ms Hardy hasn’t actually read much young adult fiction. Please give her copies of Salvage the Bones and Sea Hearts (and kindly inform her that Margo Lanagan’s latest YA offering made the Stella Prize longlist). Hopefully these books will prompt Ms Hardy to revaluate her literati snobbery.