Not such a bitter aftertaste: Ian McEwan’s Sweet Tooth 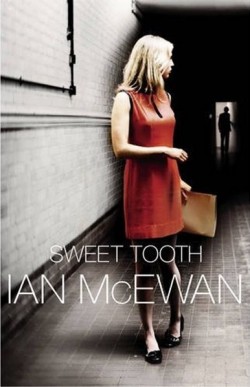 Long before Mulder and Scully turned the phrase ‘trust no one’ into an iconic piece of pop culture, Agent George Smiley, world-weary MI6 intelligence officer and star of several spy novels by John le Carré, was meting out this sombre advice to his peers. But what happens when an agent chooses to ignore it? And how messy do sanctioned deceit and double-crossing become when they involve not just matters of the state, but of the heart?

Ian McEwan addresses these sticky questions with trademark pathos in his latest novel, Sweet Tooth. While his last book, 2010’s Solar – a satirical tale about an arrogant scientist – divided fans and critics, Sweet Tooth is a return to form: poignant and darkly witty, it’s both deft character study and canny exploration of human nature.

In 1972, Serena Frome (‘rhymes with Plume’), a middle-class beauty in her final year at Cambridge, is propelled into a job at MI5, Britain’s home intelligence service. While Serena’s story takes place over a decade after Smiley’s heyday, Britain in 1972 is still circling the cul-de-sac of Cold War politics. Anyone with communist sympathies is looked upon with deep suspicion, and Serena’s anti-red political beliefs win her a delicate, if low-level, mission in her first year of service: operation Sweet Tooth.

This brings her into contact with Tom Haley, a young writer with political sympathies that MI5 are keen to exploit. Inevitably, the two begin an affair, and it’s not giving anything away to say that it ends in disaster: ‘I was sacked,’ Serena admits in the novel’s opening paragraph, ‘having disgraced myself and ruined my lover’. Forty years on, Serena tells the story of her fall from grace, unfurling a complex tale of shifting identity and confused desires.

What’s most fascinating about Sweet Tooth is McEwan’s clever use of the unspoken pact between reader and writer, which plays a pivotal and unexpected role in Serena and Tom’s relationship and its retelling.

Serena devours novels – ‘three or four a week’ – and spends long evenings in her lonely Camden bedsit losing herself in the lives of others: ‘I suppose I was, in my mindless way, looking for something, a version of myself, a heroine I could slip inside as one might a pair of favourite old shoes.’ She reads Tom’s stories – dark, misogynistic tales of thwarted ambition and jealous lovers – and falls for his words before she meets him.

But just as she discerns only fragments of the real Tom in his fiction, so Serena must conceal the whole truth of her identity from him; and these fractured selves, refracted through the complex prism of Tom’s writing and Serena’s reading, present a growing threat to the integrity of Sweet Tooth. ‘If I hadn’t wasted three years being bad at maths at Cambridge, I might have done English and learned how to read,’ Serena reflects. ‘But would I have known how to read T.H. Haley?’

It’s an unanswerable question; and for all that Serena walks knowingly into her own downfall, she is also a pawn in a man’s world, manipulated by the shadowy figures at the top of MI5, a place where ‘people at our level were not supposed to have minds of their own’.

By the end of Serena’s confession, which brings fresh revelations of duplicity, no one is without blame: as always, McEwan is an insightful documenter of our secret selves versus the selves we reveal to others. His characters may not always be likeable, but this is often because they are honest representations of humanity: flawed, selfish, wilfully blind, and decisively real.

Serena’s tale reminds us that our selves are mutable, shifting in tune with desire and circumstance. ‘The invented had to be as solid and as self-consistent as the actual,’ the young Serena believes of good fiction; but, as Smiley would probably agree, such consistency is nothing but a fiction in itself.

Carody Culver is a Brisbane-based bookseller and freelance writer. She’s also working on a PhD thesis about cookbooks, which could just be an elaborate cover for her out-of-control cookbook-buying habit.