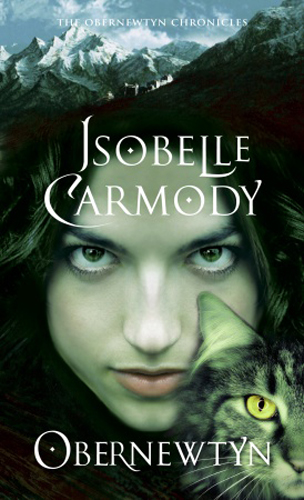 Lover of all things YA Lili Wilkinson throws her hat in the KYD YA Championship ring for her beloved YA sci-fi classic, Obernewytn.

‘Obernewtyn,’ whispered the Guardian, looking out the other window. Her voice was as low as if that sombre building quelled her as much as it did me. Even the horses seemed to walk softly.

Here are five reasons why Obernewtyn should reign supreme in the KYD YA Championship.

1.      It was dystopian before dystopia was cool.

Everywhere you look, there’s a new article claiming that dystopia is the ‘New Big Thing’ (post-vampire, of course). But few people seem to remember that YA dystopia has been around for ages – and what’s more, many claim that YA dystopia was born here in Australia, with authors like Victor Kelleher and Isobelle Carmody in the 1980s, and Garth Nix and John Marsden in the 1990s.

Obernewtyn is set hundreds of years after a nuclear disaster known as the Great White laid waste to the world, leaving only a handful of remote farming communities. Many of the children and animals born into this post-holocaust world are deformed – those with physical abnormalities are burned by the Council, allegedly to protect the remaining citizens. Other children are born with mental abnormalities – enhanced psychic abilities. These children, known as Misfits, are imprisoned and forced to work in labour camps.

Elspeth Gordie is an orphaned Misfit. When the Council discovers the extent of her powers (she can read thoughts and talk to animals) she is sent to Obernewtyn – a secretive institution hidden in the mountains, where it’s rumoured that Misfits are experimented on, in an attempt to find a ‘cure’ for their abnormalities.

Elspeth’s powers expand as the series continues, and as she grows into womanhood. She is not a natural leader, but finds herself entrusted with the lives of many other Misfit children and animals. Elspeth spends her childhood carefully locking her heart away so it can’t be hurt any further, and watching her slowly thaw and open herself up to the possibility of love is one of the series’ greatest rewards.

Obernewtyn has all the hallmarks of a great dystopia – the controlling Council and the religious order called the Herder Faction are determined to seek out and burn alive any Seditioners (people who spoke out against the Herders) or other rebels. It has the very creepy Doctor Seraphim, and his very sinister goal – no spoilers, but let’s just say that if he really is trying to cure the Misfits, he’s going about it the wrong way.

Woven into this dystopia is a strong, highly original fantasy. There are no sparkly vampires or Potions classes here. Elspeth’s abilities open doors into other worlds – the subconscious shared-consciousness worlds of the Dreamtrails, where Elspeth is guided by Maruman, her one-eyed grouchy old cat (one of my very favourite characters in the series). There’s plenty more genre-mashing in the series – from the wild and woolly gypsies to the mysterious underground caverns that hint at a much more science-fictiony kind of story.

That’s Unrequited Sexual Tension, for those just joining us. I don’t want to spoil anything, but let’s just say that if you like your fictional men as rugged as Aragorn, as broody as Mr Darcy and as loyal and true as Westley, you will be on board with this series.

I was given Obernewtyn as a present for my eighth birthday. I’m now 31, and the series still isn’t finished. The world is full of people my age shaking their fists and muttering I just want to know what happens! through clenched teeth. But, glass half full: the series certainly has longevity. The seventh and final book will be published next year. I can’t wait.

Lili Wilkinson is an award-winning writer of books for teenagers, including Scatterheart, Pink, and A Pocketful of Eyes. She’s currently studying for a PhD in YA literature. Her latest novel is Love-Shy (Allen & Unwin).

If you want Obernewtyn to win the KYD YA Championship, you can cast your vote for it here! Vote now and you can also go into the draw to win some amazing prizes.