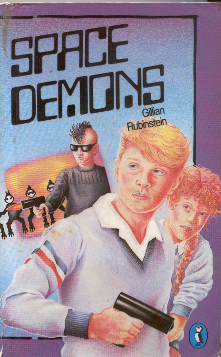 To kick off the KYD YA Championship, Andrew McDonald looks back at the future with the seminal Australian YA science fiction book Space Demons and tells us why it should win.

Every generation has its Space Demons.

I speak not of actual demons from space (although some generations are stranger than others), but of Gillian Rubinstein’s seminal novel, Space Demons. For Australian children and teenagers in the late eighties and early nineties, it was the essential book of the time.

No one devours books the way young readers do, and yet there is always one book that does the opposite. It eats its readers. It chews them up and spits them back out again. They walk away stunned and changed forever. I know, because this happened to me when I was 11 years old. I was consumed by Space Demons. And I’ve been in awe of the book ever since.

For a suburban kid like me, the novel was a revelation. Here was the mundane Australia I knew: a place of school routines, MAD magazines and video games. The words ‘New South Wales’ actually appear in the text of the novel. Twice. For someone who was used to reading about adventures set in chocolate factories and faraway lands, the world of Space Demons was shockingly different. It was my world. It was the Australia I’d grown up in.

The story kicks off when our protagonist, Andrew, is given  a video game called Space Demons by his father, who says it’s a prototype game from Japan. We then head into the now familiar characters-get-sucked-into-video-game storyline. It was less of a cliché back then, and more of a full-on WTF moment, since you had to be shot with the Space Demons gun by someone who hated you in order to go into the game. Intense, huh?

The action really ramps up when the space demons themselves enter the real world. Things turn decidedly sci-fi (and wonderfully creepy) as characters start seeing vertical black lines in the peripheries of their vision. The black lines are, of course, menacing space demons lurking at the edges of reality. By this point my 11-year-old mind was officially blown. Australian stories could be weird and familiar and sci-fi.

Not that I would have identified Space Demons as science fiction back then. To me it was merely an awesome story. And yet, a door had opened. I’d go on to enjoy authors such as Emily Rodda, Isobelle Carmody and Victor Kelleher. Since then, I’ve always thought of Gillian Rubinstein as the godmother of science fiction in Australia. With Space Demons, she ushered a generation of young readers into the bookish worlds of sci-fi and fantasy.

Like all the best science fiction, Space Demons is essentially about very human matters. It’s not a story about demons or computers at all. It’s a kind of schoolyard drama, portraying the lives of four young people with skill and compassion – vain Andrew, aggressive Mario, independent Elaine and introspective Ben. And while the see-where-hate-gets-you theme is slightly didactic, there is no scene more absorbing and terrible than when Mario turns the Space Demons gun on himself. His self-loathing is so great that he is initially the only character who can shoot himself into the game. It’s compelling stuff. And it’s the point that the true power of the novel becomes evident. The space demons they’ve been battling are not as scary as the (metaphorical) demons lurking in the shadows of mundane, everyday life. These ‘life demons’ are so often the thematic focus of YA fiction and Gillian Rubinstein examines them with power, honesty and delicacy.

Today, Space Demons is like a retired champion that has aged incredibly well. There is no great detail about hardware, software or consoles in the book. Atari is mentioned once and there’s a joystick in the mix, but otherwise Gillian Rubinstein’s descriptions of the game are so measured she could have been describing an iPhone app.

Andrew McDonald is a children’s book author. He is the online manager at Readings and was a co-judge of the Young Adult category of the Victorian Premier’s Literary Awards in 2011. Andrew’s debut novel, The Greatest Blogger in the World, is in no way autobiographical, although he does blog sporadically at http://andrewmcdonald.net.au. His second novel is due out in 2013.

If you want Space Demons to win the KYD YA Championship, you can cast your vote for it here! Vote now and you can also go into the draw to win some amazing prizes.