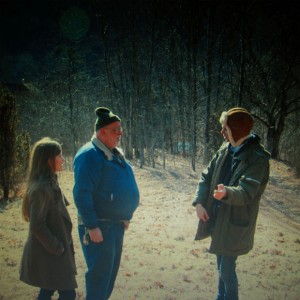 Until recently, Dirty Projectors traded in a highly idiosyncratic and instantly identifiable form of indie rock. The band’s sole songwriter and explicit leader, Dave Longstreth, is a Yale-trained musician whose songs contain passages as fiendishly convoluted and baroquely formalist as anything in the classical music canon. At the same time, there’s a looseness and spontaneity to Dirty Projectors’ previous albums that suggests Longstreth is ambivalent about the notion of technical perfection, if not about diligence – the recorded versions of his songs sound as though they are the product of sifting through hundreds of takes, painstakingly searching for the most exquisitely imperfect components for his songs. These songs also draw from a wide array of musical sources, most prominently West African highlife, punk rock, rhythm and blues, and the vocal gymnastics of madrigals. (It’s worth mentioning here that Dirty Projectors really began to shine after Longstreth introduced his now-trademark use of multiple female singers playing off each other through point and counterpoint.) Dirty Projectors’ music is thus a uniquely rich stew of high and low art from around the globe, both thrillingly original and uncannily familiar – a quality that has drawn other syncretist oddballs such as Talking Heads’ David Byrne and Björk to Longstreth’s work as both fans and collaborators.

As the above précis might indicate, Dirty Projectors’ music lends itself to both high concepts and ironic self-subversion. These two tendencies manifest in their 2007 album Rise Above, a ‘reimagining’ of Black Flag’s seminal 1981 hardcore punk album Damaged. The high concept is recreating Greg Ginn’s abrasive blasts of guitar angst as lush polyrhythmic pop; the ironic self-subversion is that Longstreth had not listened to Damaged since he was a teenager, and refused to return to it before embarking on the project. Rise Above was followed by the freewheeling playfulness of the band’s breakthrough album, Bitte Orca (2009). Its lead single, ‘Stillness Is the Move’, takes great fistfuls of musical influences and stuffs them into a hooky pop song structure: there’s a tinny West African guitar lick, a beefy hip-hop beat, and vocalist Amber Coffman doing her best impression of Mariah Carey in ‘Emotions’ before a heavenly string ensemble sweeps down and draws a graceful curtain over the song. While the results of such showy experimentation can be thrilling, they can be equally impenetrable, as in Bitte Orca’s six-minute prog-rock epic ‘Useful Chamber’. As if such showy displays of virtuosity weren’t enough, Longstreth followed Bitte Orca with Mount Wittenberg Orca (2010), an EP written and performed in collaboration with the ever-arch Björk, whose opening track, ‘Ocean’, consists of Björk and vocalists Coffman, Angel Deradoorian and Haley Dekle wailing like sirens over the low rumble of a cello.

Swing Lo Magellan, by contrast, is an album that makes a virtue of directness and melodic simplicity. Which is not to say that it doesn’t sound like a Dirty Projectors album – those compositional flourishes remain, but they are treated as means to an end rather than as ends in themselves. Thus the songs on Swing Lo Magellan, with the exception of gnarly deconstructed blues number ‘Maybe That Was It’, are written in simple 4/4 time (as opposed to the slippery time signatures of, say, their David Byrne collaboration ‘Knotty Pine’) and stick to more conventional verse-chorus-verse structures. They each have a key melody that is eminently hummable, something Longstreth pre-emptively acknowledges by commencing the album’s first song, ‘Offspring Are Blank’, with a hummed version of the verse. And, perhaps most importantly, the lyrics to these songs are less abstract and allusive than past albums, focusing instead on simple turns of phrase that frequently point to experiences that transcend language. ‘I want to feel the breath of a force I cannot explain,’ Longstreth pleads on ‘Dance For You’, while the album’s final track, ‘Irresponsible Tune,’ contains a paean to the necessity of music: ‘But without songs, we’re lost / And life is pointless, harsh and long.’ It’s no accident, then, that the album contains two songs that rival Bitte Orca’s ‘Two Doves’ as the most heartfelt and sincere moment in Dirty Projectors’ oeuvre: the album’s title track, a meditation on the Magellanic Clouds and the concept of navigation, and ‘Impregnable Question’, a plain-spoken love song that, with its central refrain of ‘You’re my love, and I want you in my life’, will surely have a long afterlife at music nerds’ weddings.

These new virtues do not necessarily supplant those of earlier Dirty Projectors’ albums, but rather enrich and deepen them. There are still difficult passages: the skittering beats of ‘See What She’s Seeing’ are as complex as any programmed by dance music auteurs Aphex Twin or Squarepusher, and the deliberately out-of-tune guitar noodlings on ‘Maybe That Was It’ are enough to stretch the patience of musically conservative listeners. But nowhere in Longstreth’s long discography does he bring all of the disparate threads of his project together as forcefully as in ‘Unto Caesar’, which features his impeccably loose guitar style, a killer sax melody, and makes the most out of the interplay between his vocals and those of Coffman and Dekle through a memorable call-and-response. It also has some truly charming touches: if you listen closely, you can hear Coffman and Dekle’s in-studio banter, including the inimitable question, ‘When should we bust into harmony?’ ‘Unto Caesar’ is the most perfectly Dirty Projectors-ish Dirty Projectors song yet, and it shows that Longstreth knows exactly how to transcend the deadening varnish of so much interpretative theory and formalist irony: keep doing what you’ve been doing, but really mean it.