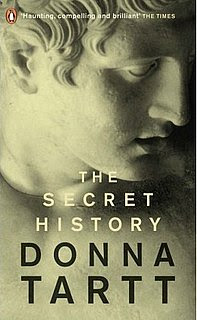 I’ve read several books of late that haven’t inspired me enough to do the second read and background research I usually do for this column. Not that the books have been bad. They’ve simply lacked that spark that sets me raving to friends and boring through the author’s back catalogue. All of which has set me to thinking about what a great book is and what a great book does.

It seems to me that a great book…

A great book puts you out of patience with all the chores and necessities of life that must be endured before you can pick it up next. Years ago I was so enthralled by Donna Tartt’s The Secret History I could not look up from it, even to cross the road. (The enraged motorist who nearly collected me did not appreciate this). Great books push you to feats of ingenuity to continue reading. A former colleague of mine used to wrap an innocuous management text dust jacket around her copy of Crime and Punishment at work. I recently devised a patent-worthy method of securing Hilary Mantel’s Wolf Hall to the stepper at the gym involving bull clips and an elasticised headband.

Great books are so rich that you can’t digest them all at once. Certain passages and themes lie dormant until you’re ready to see them. I must have read Wuthering Heights seven or eight times before I grasped that throughout Catherine and Heathcliff’s last, searing encounter Catherine is in the early stages of childbirth. Her body is forcing her ever further into the social role of ‘Mrs Linton’, as mother to Edgar Linton’s child. The more Catherine ‘becomes’ Mrs Linton, the more her self – her real self – is ineluctably lost. And no one but Catherine has been the instrument of betrayal of that self. As Heathcliff unsparingly tells her, ‘misery, and degradation, and death, and nothing that God or Satan could inflict would have parted us, you, of your own will, did it’. As I read this passage for the umpteenth time, a new chill of recognition froze my bones. You, of your own will, did it. Catherine’s fate was a cautionary tale of what happens to people who don’t cleave fast to their essential selves. It was a siren-wailing/light-flashing moment that came at precisely the point in my life when I needed it.

A great book camouflages the scaffolding that supports it. There is nary a whiff of the elbow grease required to develop structure, plot, through-line and character. To draw again from Wuthering Heights, the book that I most admire from a technical perspective, you have to go looking to find the masterful symmetry that binds it. The narrative is so skilfully drawn that you don’t notice you’re getting the tale at second and sometimes third hand, as where narrator Lockwood tells the reader what Nelly Dean told him Zillah told her. The effect should be clunky and remote, but somehow it is not.

A great book isn’t just a prop to while away the dull hours; it shines a light into the murky corners of the soul. Great books know that the world does not divide neatly into heroes and villains and that moral conduct requires artful navigation. Take Anna Funder’s All That I Am, for example. As readers we see the circumstances that lead Hans to behave as he does. . His cowardice is explicable, forcing us to ask how we would respond if – God forbid – we were ever in similar circumstances. Great books are fertiliser for compassion, self-knowledge and empathy.

…creates a conflict of desire between lingering and racing.

Great books compel you to read fast to find out what happens. But they also force you to a retreat at the end of certain lines and passages that demand immediate re-reading. I was slow to warm to George Eliot’s Middlemarch, but once I did I was a traffic accident waiting to happen (again). I gasped when I read Lydgate’s realisation of Rosamund’s incompatibility with him: ‘the blank unreflecting surface her mind presented to his ardour for the more impersonal ends of his profession and his scientific study’. The blank unreflecting surface her mind presented. In a handful of words Eliot captures the central flaw of an entire personality.

These are my thoughts on the hallmarks of great books, but what do you think? What separates a great book from a merely good one?