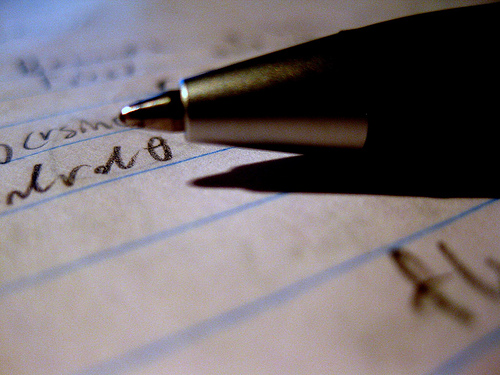 During the Victorian Writers’ Centre’s ‘Advanced Year of the Novel’ course I did in 2011, one of the first questions posed to the group by the tutor – the redoubtable Andrea Goldsmith – was ‘who hasn’t read me?’ I sheepishly put up my hand and received a scolding from Andrea for being so foolish as to accept the tutelage of someone I hadn’t ascertained could write quality fiction. One of Andrea’s writing principles is that writers are best served by learning from those who do it better than them. For this reason she starts her working day absorbed in the work of writers she believes can push her to be better.

I recently had cause to return to Andrea’s stricture, whilst dining with two girlfriends who are completing novels as part of a doctoral degree. Their academic supervisor writes on topics that relate to creative writing, but has not published a novel and does not write novels. Curiosity piqued, I looked up the publication record of the staff that teach creative writing at their university but could find no evidence that any of them write novels.

It’s hard to imagine another academic discipline in which this would be possible. Yet academics with no experience of writing a novel are in this case considered sufficiently expert to teach others how to do it and, what’s more, judge their work. To be fair, some creative writing courses feature novelists I’d swoon to work under, like Gail Jones and Alexis Wright, both at the University of Western Sydney. But it seems bizarre that any supervisors in a postgraduate creative writing course would not have experience as long-form fiction writers.

I don’t begrudge universities extending the range of the traditional humanities offering, creative writing included. Having worked as an academic, I know how damnably difficult it is to attract students and maintain funding. One year, our survival strategies included sexing up the course titles (‘Modern European History’ became ‘Sex, Death and Revolution’) and making our intrepid way to the Engineering Department to teach critical thinking to some (utterly bewildered) third-year students.

Similarly, I can see the enormous advantage of the university for aspiring writers: a structured environment in which to get the work done, access to a well-resourced library, a scholarship to maintain you while you write. It makes me salivate just thinking about it.

Nevertheless, it seems to me that the novel is awkwardly shoehorned into academic convention. The distinguishing feature of a PhD is generally taken to be an original contribution to the existing body of knowledge, based on extensive research. Thus, for example, the University of Adelaide describes its creative writing PhD as providing ‘a coherent demonstration that the candidate has reached an appropriate standard in research and made a significant and original contribution to knowledge in the area’. In a similar vein, the University of Western Australia (where I earned my PhD) describes the degree as ‘a substantial and original contribution to scholarship, demonstrating mastery of the subject of interest as well as an advance in that field of knowledge’ (my emphasis).

Scholarship implies research, the location and evaluation of primary evidence, intimate acquaintance with the body of knowledge in one’s field, and the formulation and testing of a hypothesis. Yet a novel, particularly a historical novel, can be built from all of these things but still be a dull and ultimately unsatisfying read. A novel that succeeds as a novel requires something more than scholarship. It requires imagining oneself into a situation in an authentic way.

I suspect the ‘exegesis’ was the universities’ solution to the vexed question of how to position a novel as scholarship. Typically, a student enrolled in a creative writing PhD is required to write a novel and an exegesis: a ‘scholarly, self-reflective critique’. Friends who have completed an exegesis describe it as a hybrid of writing journal and theoretical treatise that explores the novel. So, for example, if the creative element of your PhD is a work of historical fiction, the exegesis might explore the relationship between fiction and history; and the ways in which they inform, provoke or challenge one another. A useful endeavour, certainly, and one which could well shape the novel. But if the degree requires both the novel and the exegesis, what happens when the two are in conflict? If the intent of the novel as suggested by the exegesis is light years from what the novel actually achieves, does that make it a bad novel or a poor exegesis?

I’m certainly not suggesting that the novel isn’t worthy of attentive and serious study. Having written a PhD and a novel I can say unequivocally that I found the latter immeasurably more difficult. What I am suggesting is that novel writing and academia are strange bedfellows – and that both might be better served by parting company.