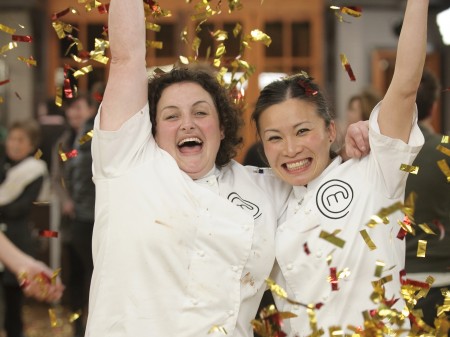 When I wrote my piece on memory, migration and MasterChef for Issue Seven of Kill Your Darlings, I mentioned that Poh Ling Yeow (Adelaide-based visual artist and cook of Malaysian-Chinese origin) had become a role model of sorts. Not only was she the runner-up in the first series of Channel Ten’s MasterChef, but subsequent series have continued to feature ‘ethnic’ contestants, possibly because it provides ‘colour’ to both the food and the personality dimensions of the reality TV contest. Still, I feel none of the later participants complicated the non-white representation discourse on mainstream, commercial television in the same giggling yet dead-serious manner as Poh. Not only was commercial Australian television beginning to include non-white people (real and fictional) in its shows, but Poh also defied the subservient Asian woman stereotype through her cooking and interaction with the judges, giving us a televisual hint of Australia’s multicultural nuances and complexities.

There is a long history of academic scholarship and some public debate on whether (and even how) non-white minority groups are represented in the media of OECD nations. At the cost of oversimplifying what is a vast body of literature, let me say this – the one phrase that has resonated with me since my first encounter with postcolonial writing at uni is black British cultural critic Kobena Mercer’s ‘burden of representation’. As weighty as this term sounds, I think it has enormous potential to free both migrants and non-migrants from the burden of bland cultural representations and political correctness.

What Mercer meant by ‘burden of representation’ was the immense pressure felt by creative practitioners in the diaspora to both represent their own ethnic group, and also to show it in a positive light. They were also faced with the inevitability of being defined by their ethnic group, over and above their affiliation with their chosen creative practice, as explained in this interview by black artist Kerry James Marshall. I am sure those of us working in any creative industry in Australia in the present day are expected to have a ready-made archive of ‘cultural’ or ‘exotic’ images and stories if our last name or skin colour even so much as hints that we would be out of place on Ramsay Street. There is no doubt that many of these stories are worth telling, and do find a voice in commissioned SBS documentaries such as the currently airing Once upon a Time in Cabramatta, or satirical ABC series starring the likes of John Safran and Lawrence Leung. But what happens when ‘ethnic’ creatives want to tell non-specifically ‘ethnic’ stories, or show the dark side of their community?

When I saw Poh recently at the Asian Australian Identities Conference in Melbourne, she mentioned during the Q&A after her keynote how difficult it was for her as an artist and a migrant to negotiate her way through television’s obsession with the lowest common denominator. While her series on the ABC, Poh’s Kitchen (now Poh’s Kitchen on the Road), has been a resounding success, she added that the commercial networks never wanted a piece of her in the immediate aftermath of her MasterChef glory. She did receive a request to appear on Dancing with the Stars, but promptly turned it down. Poh’s experience (which may not be representative, but is certainly current) emphasises that while reality TV today may be diverse by accident, it does not absolve the (usually) white male middle-class bosses of commercial television from the responsibility of chasing a modestly accurate version of twenty-first century Australia (which has been shown to generate profits too – the experience of the public broadcasters is certainly a case in point, as series such as the SBS’s Go Back Where You Came From have been reported to be ratings winners). The ‘burden of representation’ then falls on all of our shoulders and becomes less of a weight.

Of course, no one is going to complain if the ethnic ‘us’ is represented by the hunky yet soft Hector (Greek-Australian), or his wife, the sexy yet feisty Aisha (Mauritian-Australian) on the ABC’s adaptation of The Slap. Yet, in Episode 7, while on holiday with her husband to celebrate their sixteenth wedding anniversary, Aisha is told that Hector has had an affair with a much younger woman. She is keen to find out whether her husband’s mistress had been ‘his type’, which she immediately interpreted as being white. On hearing that, my ethnic-representation radar came alive. However, there was utter disappointment ahead as the rest of the episode became an homage to the modern suburban marriage, rather than an exploration of an inter-cultural relationship. While Hector’s Greek-ness is normalised, even Australianised, Aisha’s ethnicity is palpable yet unexplored. In other words, an opportunity to explore the nuances of a multicultural Australia in the intimate space of a marriage was lost. The burden of representation, it seems, has been passed off to productions more deliberately cast as ‘ethnic’.

I reckon we could do with more real Aishas and Pohs on our screens – who laugh and cry as well as raising beautiful mixed-race children or showing us how to make food. That way, the idiot box will avoid also turning into an ethnic pigeonhole – it really has the potential to be more wired to the reality of Australia’s popular culture than that.

Sukhmani Khorana is a film and television academic at the University of Queensland, and a diversity advocate to boot.