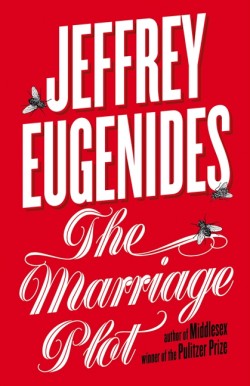 It has been a long wait between books for fans of Jeffrey Eugenides: his door-stopper of a novel Middlesex won the Pulitzer Prize back in 2002. However, readers hoping for a similar multi-generational epic will be surprised by The Marriage Plot. Middlesex was a clever queering of the familial saga/generational epic, while this novel is a self-consciously conventional,  ‘straight’ narrative.

It’s the eighties, and a cast of bright, go-getting young Ivy Leaguers are on the verge of graduation. The three central characters are each getting to grips with Derrida’s theories of deconstruction while also attempting the even more complex business of deconstructing their desires. Madeleine, the novel’s archetypal ingenue, is an English major from a prosperous family in New Jersey. Mitchell and Leonard (essentially her suitors) study religion and science respectively and hail from humbler backgrounds. So far, so standard. But, this being the 1980s, and the height of the trend for post-structural and postmodern philosophy, Eugenides has Madeleine write her senior thesis on the ‘marriage plot’: the narrative principle of so many nineteenth-century novels, in which the author’s objective is to marry off the characters.

Regrettably, the reader never learn much about how or why Madeline values the classic Victorian romances, although the title for her final essay is a killer: ‘I Thought You’d Never Ask: Some Thoughts on the Marriage Plot’. What is made clear by Madeleine’s interest in the nineteenth-century novelists is that she feels unprepared for adult life in the hard-edged, deconstructionist 1980s.

No matter how is might differ from his other works, The Marriage Plot is about what Eugenides’ books are always about: the drama of coming of age.

The love triangle that develops between Madeleine and the two men is utterly predictable, deliberately so. The adoring Mitchell is, as Madeleine recognises, the ‘smart, sane, parent-pleasing boy’ she should choose, but it’s the charismatic and complex Leonard to whom she is drawn. To Eugenides’ credit, he takes these stereotypes in some interesting directions. Mitchell, for instance, is not only sensitive and devoted but also arrogant and egotistical. Leonard, who veers from manic highs to desperate lows, is also the novel’s most honest and therefore most vulnerable character.  The novel plays with the concept of convention, both social and novelistic, and Eugenides works hard to imbue his central characters with the vitality and sensitivity of early adulthood – the struggle to understand the expectations we have of ourselves and that others have of us.  At his best when it comes to young love, Eugenides – as was the case with his first novel, The Virgin Suicides – captures the sexuality of his characters vividly and convincingly.

Yet The Marriage Plot is a less striking novel than the author’s previous work, and fails to leave the same lasting impression.

In part, I suspect, this comes from the impression given by the title – that the novel’s principal theme, marriage, will also be the subject to which the author can apply the best of his literary talents. However, it is not marriage but religion and manic depression that prove to be the most prominent (and interesting) of the novel’s concerns. After graduation Mitchell decides to go to India on a spiritual pilgrimage. He joins the volunteers working with Mother Teresa only to find himself unable to fully relinquish his ego. Leonard also struggles with his inner demons: a crippling manic-depression that leaves him delusional. For both young men the possibility of outrunning the self is a much desired but impossible outcome.

The book has generated some interesting speculation on the inspiration for the two male leads. Eugenides has spoken of his own experiences volunteering in India in the eighties, and any reader familiar with the late novelist David Foster Wallace will find plenty to recognise in the character of Leonard. Like Wallace – both brilliant and depressed – Leonard also loves philosophy, chews tobacco and (against the better judgment of all) wears a bandanna.

Eugenides has said that this last feature was simply an attempt to tap into the spirit of the eighties: a reference to Axl Rose, in particular. As an explanation, it fails to ring true, particularly because Eugenides is not the sort of writer to opt for cheesy, lazy signposts like these. Eugenides’ subtle strength is his ability to capture the recent past in a gentle but evocative way. The Marriage Plot, for instance, situates the reader in a contemporary American landscape yet untouched by email, mobile phones and social networks, but which doesn’t work hard to make this point. If anything, it is the similarities rather than the differences between now and the 1980s that are striking: insecurity greets college graduates, jobs are hard to come by and moving back home to live with parents is a popular fallback option.

Even at his most conventional, Eugenides is a moving and affecting writer. The Marriage Plot turns out to be a sort of modern-day variation on those old-fashioned narratives by Henry James and Jane Austen, the twist being that the love story doesn’t wind up confirming the value of a heterosexual union but rather the enduring value of the novelistic form.

Dr Caroline Hamilton is a researcher with the Publishing and Communications program at the University of Melbourne. She has a special interest in contemporary American fiction and has written a book about the American author and publisher, Dave Eggers, entitled One Man Zeitgeist.