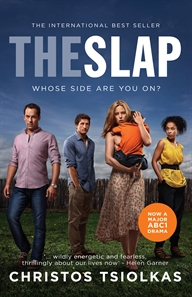 When Christos Tsiolkas’s The Slap was published in 2008, it was one of those suddenly ubiquitous novels – everyone seemed to own a copy and everyone was talking about the social issues it raised.

Tsiolkas’s tale is a controversial and polarising one, centring on the title event: a man hits a child that is not his own at a suburban barbeque (but who, arguably, may have deserved to be slapped).

The much anticipated adaptation of the novel premiered on ABC1 last night, and even before the episode aired it again sparked debates about parents’ responsibilities, disciplining children, child abuse and even breastfeeding.

It’s interesting the way the series has been pitched in promos. Adaptations are usually marketed as seeing on-screen a story you already know and love. This was pitched almost as a crime story – with the tag-line ‘Whose Side Are You On?’ – the ABC clearly eager to court the same controversy that made the novel such a success.

Yet the book is far more than the divisive story of the title. The fateful slap happens in the opening chapter, not even fifty pages in. The interest of the narrative lies in the consequences of that action that reverberate throughout the lives of those who witnessed the event. That moment becomes background for the far more interesting details of the character’s lives – the tensions, the frustrations, the simmering arguments and lusts – and the beautiful portrayal of multicultural Melbourne, its city and inner suburbs.

There is something arrestingly ‘real’ about this series. As each character walked into Hector and Aisha’s home last night it was clear this was not a Packed to the Rafters barbeque – and how much more enjoyable it is for that. Many remarked on Twitter during the program that it was like watching people they knew, and I was struck by how rarely we see this reflected on our screens. It’s a Melbourne (and an Australia) that we live in and recognise. It’s also wonderful to see a contemporary Australian story adapted to screen – no period costume, no outback settings.

This is an adaptation that is exactingly true to the novel – the opening scenes are almost word-for-word – and it should be noted that Tsiolkas was a consultant on the script. Where small changes have been made, they actually add to the story – such as the decision to have Hector invite his teenaged lover Connie to the barbeque himself (in the novel, Aisha, who is also Connie’s boss, asks her to come), or small visual touches, such as the way Connie secretly caresses Hector’s hand and accidentally brushes his wedding ring. There is an attention to detail here that not only evokes the story but enhances it, making clever use of the visual medium.

The one criticism I have of the adaptation is the decision to employ voiceover. Perhaps this is a consequence of attempting to be too close to the original, as Tsiolkas’s novel is indeed narrated in the third person. A novel must narrate, confined as all novels are to first, third or the (very rare) second person. But a film or television adaption can simply show. Because the novel and series are so naturalistic, the addition of the voiceover is jarring, not only because it’s the wrong voice (if a voiceover had to be used at all it would have been far better to use the actor’s own) but also because the narrator adopts such a jaunty tone.

It’s difficult to see what the voiceover actually adds to the episode that aired last night. The protagonist of this episode, Jonathan LaPaglia, is a good enough actor that we can infer his thoughts without the assistance of a narrator. Thankfully, such intrusions aren’t too frequent.

Another baffling choice was the casting decision for the character of Aisha, which appeared to change her nationality from the Indian of the novel. Though ­­Sophie Okonedo was great in the role, surely there are talented Indian actors in Australia?

But these are relatively minor criticisms of what is a beautifully executed adaption of an already classic Australian novel. There has been a lot of concern recently about the direction the ABC is heading with its arts and dramatic programming, but this is a really exciting series. Last night’s Slap was enjoyable, believable and not only true to the novel, but actually enhanced it for the screen.

— Bethanie Blanchard is a Melbourne writer and literature PhD student at the University of Melbourne.