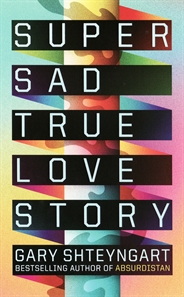 America on the brink of financial collapse. Individuals glued to the shiny screens of tiny personal computers. Self-esteem indexed to your sex appeal and credit ratings. This is the world as we know it and the world imagined at its most extreme in Super Sad True Love Story, the latest novel by Gary Shteyngart.

Shteyngart’s dystopia is close enough to the everyday realities of life in the West to make us uncomfortable but it also teeters on the brink between bathos and pathos, meaning we’re never quite sure whether we ought to laugh or cry – and at whose expense. In the tradition of other dystopian tales like Orwell’s 1984 and Terry Gilliam’s film Brazil, Shteyngart builds his romance on the unstable foundations of an irrational empire. Our hero, nebbish Lenny Abramov, almost forty, a New York native, meets Eunice Park in Rome. Eunice is Korean-American, a California girl, addicted to shopping and has a university degree that includes a major in Images and minor in Assertiveness. She is her early twenties, with a ‘fuckability rating’ in the high 700s. This is, let us say, an unlikely romance.

Despite her seeming superficiality, Eunice recognises a courageous honesty in Lenny, and Lenny recognises that Eunice is, in distinction to many of her generation, ‘not completely ahistorical’. She has tenderness and an inherited respect for the things the past represents: tradition, community, conviction. In many ways she is at war with herself: her inherited past and her acquisitive present. Lenny is likewise haunted by history and by the opportunity that life in America once represented. ‘How far I had come from my parents,’ he writes, ‘born in a country built on corpses, how far I had come from their endless anxiety  . . .  And yet how little I had traveled away from them, the inability to grasp the present moment.’

It is true (super true) that no one in Shteyngart’s novel can quite grasp the present. Everyone carries around a gadget called an äppärät (an iPhone gone feral), which streams its owner’s thoughts and conversations.  All eyes are glued to the screen, tracking friends and chatting via GlobalTeens: a Facebook-like service. Here, in the realm of techno-babble the novel hits its satiric stride: ‘I Teened her’,  ‘he actually verballed me’ and, my personal favourite, the acronym ‘TIMATOV’ (think I’m about to openly vomit). Shopping is the favorite pastime of anyone with money – our ubiquitous skinny jeans have become transparent (Onionskins) and brand labels are shamelessly salacious: Juicy Pussy, SUK DIK.

For all the talk of pleasure-seeking, life is dominated by health regimes. Lenny works as a ‘Life Lovers Outreach Coordinator’ offering customers ‘indefinite life extension’.  According to Life Lovers, immortality is just a matter of putting in enough energy, money and dieting. In this eerie world a glass of wine is celebrated as a daily dose of resveratrol; Lenny and his colleagues blithely discuss fasting insulin levels and coenzyme Q10. Lenny himself announces early in the novel that, now he has Eunice, he is resolved never to die. Her youth is no so much infectious as desirous.  Like a Woody Allen character, Lenny covets immortality, and by extension is drawn to Eunice, because it helps allay his existential fear of death.

Love and death are the two bulwarks of the novel, but given its dystopian atmosphere and its cataloguing of the continuous buzz of technology it is to Shteyngart’s credit that the deeper, philosophical resonances of this future world are not overwhelmed by satiric bells and whistles. In this respect the novel is, like its author, a blend of Russian and American traditions: a touch of Tolstoy, a dash of Pynchon.

Lenny is a literate and sensitive hero and Shteyngart blesses him with an idiosyncratic and evocative voice. Foreign words scattered in his parents’ everyday conversation are, to Lenny, ‘like raisins shining out of a loaf’. Intimate, mundane life is touched with delight. The embarrassment of his parents parading around in their underclothes before company is tinged with pride: ‘the gray carpet that my father wore with an odd touch of class, as if he were a royal in some tropical country.’

Of course, no matter what happens, the title tells us this is a super sad story and not even the emotional equivalent of coenzyme Q10 can save these characters from themselves. In the end it is not technology or global finance or body augmentation that brings about the end of this romance. Our lovers are burdened by their personal histories, the collective weight of cultural history and plagued by insecurity.

That the story should be told in epistolary form, with Lenny’s diary and Eunice’s emails and chat messages, signals Shteyngart’s interest in textual form and the legacy of literature. The title, which, at first glance, could betray a cloying postmodern cuteness, is revealed to be the name of one of the many texts (a particularly bad film adaptation, as it turns out) inspired by the discovery of Lenny and Eunice’s correspondence. The literary version, officially published by the ‘People’s Literature Publishing House’ in Beijing and New York, has become one of the future’s more popular stories. ‘When I wrote these diary entries so many decades ago, it never occurred to me that any text would ever find a new generation of readers’, writes Lenny (now Larry, living out his days in exile in Canada).

Perhaps the last man in New York City to have maintained a personal library, Lenny’s faith in books (‘bound, printed, non-streaming media artifacts’), along with his diary, mark him out as almost obsolete. It’s inevitable then that he never achieves the kind of immortality he seeks. And yet, there is a potential for optimism in Shteyngart’s framing of Lenny and Eunice’s first person love story as a literary sensation. Here is a dystopian novel about a future dominated by invasive media and streaming images – a world in which books literally stink and no one reads – in which writing and publishing resurface. In the words of the ruling government, ‘the People’s Capitalist Party’: ‘To write text is glorious!’

Caroline Hamilton is working on a three-year research project examining the effects of digital culture on print publishing at the University of Melbourne.