Fear, complexity and commitment in Joe Meno’s The Great Perhaps 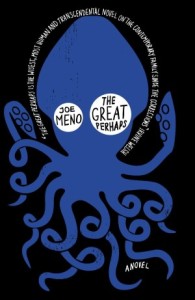 Jonathan Casper – father of teenage daughters Thisbe and Amelia; son of Henry, an ex-aeronautical engineer for the US Air force; and husband to Madeline, whose research into the behaviour of pigeons is yielding bizarre results – suffers from a rare form of epilepsy. Upon seeing the complex shapes of clouds, he collapses in a terrifying seizure. A New England Journal of Medicine article offers some insight into the condition:

Ongoing research suggests that the cloud itself represents an autonomic fear of complexity, and that this unusual neurological response to a terror-stimulus is simply the survival instinct of a species that inhabits a world which has, over such a short period of time, become much too complicated.

With this, two of the main co-ordinates of Joe Meno’s latest novel are mapped – cowardice in the face of complexity. Through the gradual collapse of the Casper family, The Great Perhaps explores each member’s fears, and their attempts to avoid as well as ameliorate them in an increasingly inscrutable world.

Everyone in this family is running from something. We have Jonathan, a dorky palaeontologist in search of a possibly extinct giant squid. Like a child avoiding the calamities of a dysfunctional family, Jonathan creates a fort in the basement, poring over his books to avoid the reality of his failing marriage and career. Madeline, his wife, also fleeing professional and marital disappointments, takes to following a human-shaped cloud across the city for nights on end. Navigating both the breakdown of their family and their fraught adolescence, beret-wearing Amelia throws herself headlong into a naïve and militant socialism, while Thisbe finds God. Henry, their grandfather, confronted with the choices he has made, chases redemption in oblivion, jettisoning his memories by writing them down and posting them to himself, while each day culling a word from his vocabulary. He has eleven left when we meet him.

All of these characters, at least initially, opt for flight rather than fight in their responses to their complex existential dilemmas. Yet they’re also united by a desire for something like community, a desire for cohesion in their lives, a connection to those they love, and a desire to commit, even if they don’t realise it, to something beyond themselves. But they so often get it wrong. Meno’s third-person narrative, however, is affectionate without necessarily endorsing the characters’ behaviour and choices. He succeeds in the difficult task of writing sentimentally without being mawkish and the effect is often touching, confronting and bleakly funny without being cynical. Take, for example, this prayer from the sensitive and occasionally suicidal Thisbe, whose newfound religious belief has her capturing the neighbour’s cat in order to baptise and save its soul:

Please let there be a heaven for everything that is too pitiful to believe.

Apparently not wanting to be saved, the cat hisses and scratches itself free. Quietly resigned to her failure, Thisbe marks another unsuccessful redemption in her notebook. The absurdity of the scene adds to, rather than alienates the reader from the pathos, and in terms of emotional pitch, is reminiscent of the type of humanism found in Vonnegut.

Formally too, The Great Perhaps is influenced by that North American postmodernist (he is given one of the two epigraphs of the book). Meno deploys a variety of metafictional techniques – forays into magical realism, historical digressions into the lives of distant relatives of the Casper family, pictures, diagrams and lists, as well as the inclusion of modes of writing considered outside the traditional remit of fiction: press releases from the Department of Justice or a governmental memo from J. Edgar Hoover. Yet despite these experimental structural devices, the prose itself remains accessible, though occasionally flat.

Along with contemporary North American novels like Franzen’s The Corrections and so much of David Foster Wallace’s work, The Great Perhaps enters the debate as to what might be next for fiction after postmodernism, deploying, extending and challenging postmodern strategies to different, perhaps more humanist, ends, while avoiding the nostalgic and saccharine. What these writers share are aesthetic and moral commitments concerning fiction, which are unique to a time where the shattering of belief in any capital ‘T’ truth is not a revelation but a self-evident banality, and where postmodern fiction’s attempt to explore the loss of Truth through metafictional conceits has also lost its trangressive edge. They are attempting to create narratives adequate to the complexities and deficiencies of postmodernity, while providing a genuine attempt to break out of some of its aesthetic, moral and emotional deadlocks.

Meno then, along with Franzen and Wallace, seems to belong to a group of North American writers who are, as Wallace described himself in an interview with The Review of Contemporary Fiction,

interested in using postmodern technique[s],  [a] postmodern aesthetic, but using that to discuss or represent very old or traditional human verities that have to do with spirituality, and emotion, and community.

That Meno and these other writers are unafraid to risk the charge of sentimentality – yet do so without forfeiting formal experimentation nor a simplification of the emotionally and intellectually complicated world they are trying to represent – says something about their commitment to a community of readers who are looking for guidance through a world as nebulous and complex as the clouds. And though it might be Wallace and Franzen who offer more lasting counsel, Meno still makes a very real contribution.

Andrew David Stapleton is a freelance writer and sometimes philosophy student whose fiction has appeared in Verandah and Voiceworks.