Crossing the Lines (Pantera Press), the new novel by award-winning writer Sulari Gentill, is a story about two people trying to hold onto each other beyond reality. When Madeleine d’Leon conjures Ned McGinnity as the hero in her latest crime novel, she makes him a serious writer simply because the irony of a protagonist who’d never lower himself to read the story in which he stars amuses her. When Ned McGinnity creates Madeleine d’Leon, she is his literary device, a writer of detective fiction who is herself a mystery to be unravelled.

As Ned and Madeleine play out their own lives while writing the other’s story, they find themselves crossing the lines that divide the real and the imagined.

When the man was murdered, the gallery was full of voyeurs. They’d come to see and be seen, to admire and be admired. In their finery they’d postured and praised the artist, considering each canvas, looking carefully at every mark of the brush, discerning nuance and tone and meaning. They eyed each other as rivals in fashion and wit, in the sycophantic ability to recognise artistic genius. The show belonged to art and artists and art lovers. And so no one noticed the writer.

When the body was discovered, there were screams of horror. Some sobbed on seeing the corpse; others could barely contain their glee. The gallery staff soothed and apologised, management called insurers, the authorities barked orders and asked questions. They listened for guilt, for motive and lies. And no one heard the writer.

When the dead man was identified, many claimed intimacy. Some had worked with him, others had danced in his arms. Several people purported friendship, a few admitted to a mutual loathing. They offered opinions and insights, analyses of character. And yet no one knew the writer.

Madeleine called Hugh that evening, as she did every evening that work took her away. The custom was more utilitarian than romantic – should she pick up milk in Ashwood? – that sort of thing. But this night she was exhilarated and she loved Hugh Lamond more for the fact that she could share it with him. She knew she was babbling, but the idea was powerful now. It pulled new ideas towards it, building a world of characters and themes and events around itself. Hugh seemed a little bewildered at first; but perhaps whatever it was that possessed Madeleine was infectious, for soon he had suggestions and thoughts. She told him about Edward McGinnity, her wellheeled writer.

‘But this is going to be a murder mystery isn’t it?’ Hugh asked.

‘No. Edward writes literary novels, the kind of worthy incomprehensible stuff that wins awards.’ Madeleine paced with the phone, unable to physically contain her excitement. ‘That’s the irony, you see. The hero of my crime fiction wouldn’t lower himself to read, let alone write the stuff himself. He’s a serious artist.’

‘But if he was a crime writer he’d know what to do to solve the crime.’

‘That’s too predictable, Hugh. The fact that he is so out of place in a crime fiction will make it interesting.’

Madeleine smiled, touched that he was so interested. ‘But why wouldn’t they approve?’

‘They might want him to be a doctor. You know, there aren’t enough books about doctors.’

Madeleine laughed. ‘No, I think his family is dead,’ she said. ‘An accident of some sort. The story will work better if he’s alone in the world.’

‘I don’t know… there’s something alluring about the lonely hero.’

‘He can’t be too lonely. He’ll need a love interest of some sort.’

Madeleine groaned. ‘If he has a love interest, I’ll have to write a sex scene.’

‘Well that’s to be avoided at all costs,’ Hugh agreed. ‘She could be dead too – the love interest, I mean,’ he said helpfully. ‘He could be a grieving husband.’

‘Maybe…’ Madeleine considered the idea. The death of Edward McGinnity’s family was probably grief enough. She didn’t want her hero to be completely withdrawn and bitter. ‘What if he loves someone who doesn’t love him back, but who might one day?’ she said. ‘That way I won’t have to write a sex scene because she won’t have him. Perhaps Edward is so in love with her that he can’t move on.’

‘Won’t that make him look pathetic?’

‘If I hadn’t married you, you would have pined forever.’

‘Hmmm. Yes… forever. Or at least a week. What time will you get home?’

‘Should be back before lunch tomorrow.’

‘Grab some milk on the way in, will you?’

Madeleine spent the evening in the familiar, generic solitude of a hotel room. She discarded her board papers onto the small table by the window and heaved her bag onto one of the twin beds. Changing into pyjamas, she ordered room service and settled into the other bed to open her laptop.

The novel would begin with him… it had to. That was how crime fiction worked – subplots, clues, red herrings all channelled through a single literary device: the protagonist. The reader would have to know him and trust him for the story to work. So she would open with him, and worry about the murder later.

Madeleine closed her eyes. She could see him: sitting on the open deck of his expensive beach house, oblivious to the ocean view as he worked on the great Australian novel. She smiled. Of course he would write longhand, every word chosen after consideration, deliberation and requisite suffering. The man she saw was handsome. For a moment she wondered when she’d decided that. His hair was dark, blown wild by the salt breeze against which his collar was turned up. The sky and the sea were both grey and turbulent. And yet he continued to write, muttering to himself as he tapped the pen against his chin. It was not until the first fat drops fell that he seemed to notice. Cursing, he closed his notebook against the rain and stepped through the French doors into the house.

Crossing the Lines is available now at Readings. 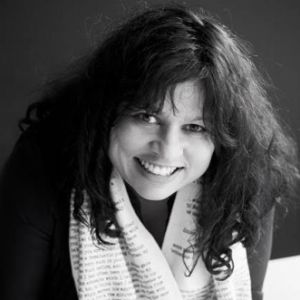 Award-winning author Sulari Gentill set out to study astrophysics, ended up graduating in law, and later abandoned her legal career to write books instead of contracts. Sulari is the author of award-winning Rowland Sinclair Mysteries, a series of historical crime fiction novels set in the 1930s about Rowland Sinclair, the gentleman artist-cum-amateur-detective. She lives in the Snowy Mountains of NSW with her young family and several animals.

The Next Chapter recipients in KYD