‘There is no such thing as a moral or an immoral book,’ said Oscar Wilde, in The Picture of Dorian Grey, his fable about a troubled queer Victorian aristocrat. ‘Books are well written, or badly written. That is all.’

Down The Hume is the debut novel of Peter Polites, a Greek Australian writer and the Associate Director of Western Sydney literary collective SWEATSHOP – which, in recent years, has enjoyed a rising profile due to its achievements in championing marginalised voices from Western Sydney, as well as a certain flair for moral effrontery.

Branded as a queer-noir, Down The Hume follows Lambreki (anglicised to Bux in childhood), a queer, second-generation Greek Australian man, as he struggles to achieve happiness in the grimmer parts of Western Sydney. Bux is your classic noir rube; introspective, damaged, ground down by life – we follow his weary monologue as he is led astray by the homme fatale, his boyfriend, only ever referred to as Nice Arms Pete.

From the first pages, it’s clear Polites is not fucking around. Nice Arms Pete, a steroid-addled petty drug dealer, and Bux have an uneasy co-existence, a relationship where rough sex and domestic violence bleed into each other; affection into exploitation. Bux desperately wants the happy home his parents were not able to build in Australia, but is thwarted time and again.

From the first pages, it’s clear Polites is not fucking around.

As Bux’s reliance on Pete’s volatile affection – and the painkillers the dealer drip-feeds him – erode his already fragile sense of self, Bux begins to self-destruct, torn apart by forces he doesn’t understand until far too late. Queer Sydney through Bux’s eyes is a Darwinian struggle he seems doomed to lose; in Polites’ hands, his downfall become a subtle, bitter and note-perfect critique of the thematic trinity of class, race, and sexuality.

The migrant-hothouse mileu of outer Sydney is central to this novel, and the babel of voices that wash over Bux are note perfect: slang, snatches of Greek, text messages, crisp formal pronunciations from a posh love interest, misremembered bits of pop culture – a twinkish teen that Bux encounters speaks ‘like Schweppervescence’ – and immigrant English that ranges from dented to broken to overcompensated.

There’s a certain Australian vernacular in Down The Hume that Polites has captured perfectly. Bux eats ‘sangas’ and a hostile stranger gives him ‘a dirty’; he doesn’t sulk about his boyfriend – he gets ‘cut’ about the ‘situ’. Halfway through reading this book, I realised to my surprise that it was making me nostalgic – here, rendered on the page, was a perfect echo of how we talked back where I grew up, the exact way I’d spoken before university made me insufferable. Here it was; a moment for me that was something like Proust’s Madeline, in Polites’ evocation of a hinterland of ‘skips’ and ‘wogs’ and a formaldehyde-fresh preservation of the ennui of suburban masculinity – destructive relationships, barely-managed drug addictions, the special melancholy of being insatiably horny and just not-quite young anymore.

There’s a certain Australian vernacular in Down The Hume that Polites has captured perfectly.

There are echoes of Faulkner in the author’s ability to capture and conjure the essence of a human being. Bux’s voice is a real achievement – a hard-boiling torrent, his narration is stunted and circumscribed, as charming as it is frustrating. Polites gives the reader an intimate tour through Bux’s psyche, but leaves enough room for us to fully inhabit the world around him. It feels real, in a world where authenticity is a forged currency. The voice is so well tuned that the odd moments when it slips from growling to poetical swagger are seamless. ‘The first time I saw Nice Arms Pete, the days were short and shitty. They were filled with a discount-store sunlight and I breathed the nocturama.’

At times, the relentless energy of Polites’ novel comes at a price, falling victim to a debut author’s desire to say everything that needs to be said. In those moments, Bux is a one-man Greek chorus, the action stopping every few pages as the narrator delivers a precis of some far-flung corner of his life: the drudgery of dead-end jobs, the etiquette of exchanging anonymous blow-jobs at a beat, the oppressive social and cultural realities that circumscribe Bux’s world.

[Bux] feels real, in a world where authenticity is a forged currency.

Structurally, it’s a bit of a mess – but that’s kind of the point. Shaggy set-pieces – stalking, fighting, a sexual rendezvous in a literal closet, suffering through the early stages of drug withdrawal – provide a fractured narrative which seems as meandering and aimless as Bux himself. That is, until the final pages, where much is revealed that changes what we thought we were reading. The denouement is rather rushed, but it works.

Some of the foreshadowing is lost in the light and shadows, but seeing as the whole point of this book is the subtle shading, and the shade it throws, it’s forgivable – and a formidable payoff.

Down The Hume is smart, smart fiction. It has a moral case to make but, for all its energy and fighting instinct, it is too intelligent to be didactic, or to sacrifice plot. It has its flaws, but it is never boring. Any way you’d care to measure it, this tale of a troubled queer existence is a well written book. That is all.

Down The Hume is available now at Readings.

Down The Hume is Kill Your Darlings‘ First Book Club pick for March. Read an interview with the author here and hear further discussion and a reading from the novel on the latest episode of the KYD Podcast. 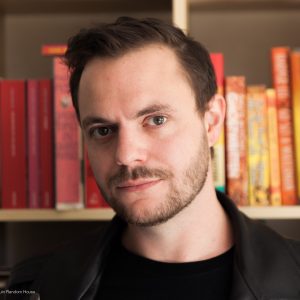