I am sitting in my bedroom, waiting for a call from a radio presenter. My heart is thudding so hard I feel it in my throat. I sweat with nausea, and the physical sense of fear is so overwhelming I fight the urge to flee.

I wasn’t always like this. It began three years ago, on one of those sweltering January days of which only Adelaide is capable. I left my children with a babysitter at the museum, then strolled down a baking North Terrace to a Rundle Street café scented thickly with chocolate. I was meeting the publisher of my debut novel to discuss final edits to my manuscript. I was excited and happy.

When my publisher arrived ten minutes later, she found me sitting out on the street, ashen-faced and crying. To this day, I do not know what triggered this reaction. One moment I was cheerful, the next I was running outside in utter, indescribable terror.

A few months later, as a crowd milled into the atrium of the SA Writer’s Centre to celebrate the launch of my debut novel, I hid in the office and struggled to breathe. For months I had planned and looked forward to this event, yet at that moment I felt like a two-year-old abandoned in a crowded shopping centre. All I wanted, with every cell of my body, was to go home.

Steadily it grew worse. On a flight to Melbourne, a flight attendant found me weeping by the bathroom door and asked if I was a nervous flyer. ‘No,’ I told her, ‘I don’t know what I’m afraid of.’ Driving to deliver a library talk, I drank a glass of wine in the car to temper my nerves. It was nine o’clock in the morning. Then it began to hit at innocuous times: Out to dinner with family. At a friend’s house for coffee. In the supermarket. In the waiting room of the doctor’s office. In my own house.

Panic disorder, my GP called it. Be careful, my first psychologist said. This can turn into agoraphobia.

For the first thirty years of my life, I was a confident, independent, outgoing person. I worked at a managerial level. I socialised and spoke in public. I travelled overseas. I wrote a novel.

I now have a kind of Pavlovian fear of fear itself. My body has become conditioned to feel debilitating dread every time I am expected to do a certain task at a certain time, because too many of those times now have elicited panic. Whether that is eat with a group of friends, or await a doctor’s appointment, or receive a phone call from a radio presenter at 4.00pm, my body feels the apprehension of a thing so acutely it perceives that acute response as an actual threat. Regardless of how much I love writing, or feel perfectly capable discussing it.

How will I ever sell books if I can’t speak at a writer’s festival?

During his 2013 publicity tour for Eyrie, Tim Winton admitted to a thousand-strong Melbourne crowd, ‘I’m terrified.’ Reading this invokes in me an unsettling combination of horror, envy and reassurance. It’s horrifying to me that an author with the traction of Tim Winton still needs to appear in public – but I’m envious that despite his terror, he still does it anyway. And to learn that someone as beloved and accomplished as Tim Winton still gets frightened? Well, that’s a little reassuring.

Elena Ferrante, pseudonymous author of the wildly successful Neapolitan Novels, has famously eschewed personal limelight. Unlike Winton, who dislikes publicity but seems resigned to its necessity, Ferrante maintains that her identity outside of writing is superfluous. ‘The person who has created the writing is, beyond the writing, so redundant,’ Ferrante told the Sydney Morning Herald. ‘I want the book to have within it all that is necessary to earn readers … [the] pure and simple joy of writing doesn’t need a public, it’s my own space of freedom.’ While initially Ferrante’s anonymity may have been a personal choice, it has arguably now become an integral part of her brand. Conjecture and speculation about the author’s true identity creates almost as much buzz as her writing.

It is perhaps a safe suggestion that an individual’s desire for privacy exists on a broad spectrum – a spectrum writers have always considered. JK Rowling’s unmasking as Robert Galbraith transformed The Cuckoo’s Calling from a modest debut into an international bestseller. Rowling asserts she wrote as Galbraith in order to carve a readership unprejudiced by her previous success – is Ferrante doing the same? Meanwhile, for some writers, the need to hide is a reaction to publicity itself. Following Catcher in the Rye’s phenomenal hype, JD Salinger became one of literature’s most famous recluses, with The New York Times once claiming Salinger had ‘elevated privacy to an art form.’

Social media, public launches, blogs and podcasts all in some way form a modern author’s publicity circuit. Emerging writers are counseled on the importance of ‘platform’ and ‘presence’ – in other words, readers must have a way to see, hear, or otherwise engage with authors. Writers cannot simply write – they must also perform.

At one end of the human spectrum, anxiety is a simple need to protect some sense of self. At the other end, it is a crippling mental illness. All authors’ myriad individual needs exist within a scope of self-defined necessary obscurity: some will define no need for obscurity, others will define plenty.

Treatment for panic attacks involves understanding the body’s fear response, repeated and safe exposure to fear stimuli, and identifying maladaptive cognitions surrounding attacks. Which is a complicated way of saying: do the thing anyway.

My psychologist counsels that, while mitigating apprehension, I should steel myself to do something that makes me uncomfortable. So I write under my own name. I enjoy talking to readers, so I’m active on social media (well, as active as someone with 350 Twitter followers can be). I participate in Skype podcasts, phone interviews, blog Q&As. These are the interactions I accomplish – personalised, pre-recorded, low-pressure discussions of my work. The online world, which some can find overwhelming (and which didn’t exist for writers like Salinger) is, for now, the only place I can perform.

Platform may be pivotal for authors today, but it isn’t easy – or even possible – for all writers. For someone like me, doing the thing can seem impossible.

I’ve found the support and solidarity of other writers online, many of whom face similar difficulties, immeasurably helpful. And generally, publishers, publicists and agents are wonderful people who understand the personal nuances of authors – mine have been understanding and supportive. I’ve never felt pressured to do anything I’m truly incapable of. But I can’t help but feel sad and wistful when I see other writers’ public launch photos and full library tour schedules. How many more books would I sell if I were doing those things, too?

I hope that one day I might stand up there with those talented authors for whom platform comes so easily. In the meantime, I comfort myself with Ferrante’s words of authorial redundancy, and hope that even without me, my writing may find its own public. 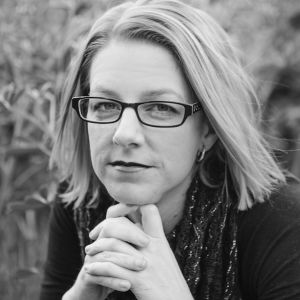 Kim Lock is a writer and author. Her articles on feminism and motherhood have been published in the Guardian, Daily Life, and Sydney Morning Herald. Her second novel, Like I Can Love, was published by Macmillan Australia in March 2016. @KimRLock