Sharpening the Axe: On being a reader and a drinker A book and a drink can both be an axe, causing you to split and spill thoughts and emotions previously locked beneath the ice. It’s not bad that these thoughts usually remain below. If you encountered them from moment to moment you would perhaps find it difficult to function in the world.

But it can be completely surprising, what you have down there.

Desire, for example. A passage in a book can call forth blood to your loins and be a revelation to you. When drinking, another person’s face becomes more beautiful. You stare at it boldly, for longer. They’re flushed, you’re flushed. You want to put your hand on their collarbone, turn the page.

But it can be much worse. Anyone who is close to a person with mental illness knows what might surface with alcohol. So much can surface that it subsumes them. The frozen sea turns to a churning tsunami. There can be blood and vomit and dripping snot and busted-up cities of words.

I don’t wish to romanticise alcohol or those who consume it. I have been worried for drinkers and worried for myself; I have been embarrassed for drunk relatives and I have done and said too much. But I do wonder about what alcohol can do, and why a person may sometimes seek out its comforts, in the same way they may turn to a good book for solace. Not in service of the clichéd ‘numbing the pain’, but for the expressiveness, enhancement and (perceived) sharpness it can bring. There’s a sweet spot, sometimes, after one or three, and then it can all go downhill. But even after eight drinks there can be some clarity (and beauty) on the dancefloor when you look around and realise we are all terribly sad losers.

Drinking can make you sob, and that’s not necessarily a bad thing. Sometimes you need to. Or someone needs to see you do it. They might have thought you had it all together when really you needed them to know that they were free to reach out.

Drinking can make you laugh, opening your mouth like a monster and squashing your chin on your neck, your lips peeled back over your gums. It comes free and unencumbered.

Drinking makes some people violent, or draws out dormant sickness. There are generations of alcoholism in my family – horror stories, and complex ones, too. When Grandpa was good he was very good, et cetera. My grandmother being dragged off the lawn in the rain. People who don’t drink for years, but then they get old and turn back to booze while everyone else turns a blind eye. What else do they have by that stage? You hope that axe is not cutting through to some of those difficult memories, but then sometimes they need to be confronted.

My mum needs to talk about her own parents, and when she drinks, she can. It’s ever-complex. I hope she doesn’t mind me mentioning it.

Depending on your personality type, the cracking open can also be accompanied by a shimmering sense of freedom. For me – someone who is in control, a high achiever, juggling demands and expectations – the freedom comes from letting go. But also holding on: I don’t ever want the night to end. And I do hold on, just a bit, to my control (I haven’t thrown up from drinking for nine years). Karl Ove Knausgaard and I have some similar issues. In a passage from A Death in the Family, he talks about his brother’s propensity to slur and get drunker until he passes out, and how that means his brother’s behaviour often seems more excusable, because Karl Ove still outwardly seems in control of himself:

‘If it was not visible from the outside how utterly plastered I was, since I walked and talked almost as normal, there was no excuse for all the standards that at a later point I might let slip, either in language or behaviour. Furthermore, my wild state always became worse for that reason, as my drunkenness was not brought to a halt by sleep or problems of coordination, but simply continued into the beyond, the primitive and the void. I loved it, I loved the feeling, it was my favourite feeling, but it never led to anything good, and the day after, or the days after, it was as closely associated with boundless excess as with stupidity, which I hated with a passion. But when I was in that state, the future did not exist, nor the past, only the moment, and that was why I wanted to be in it so much, for my world, in all its unbearable banality, was radiant.’

Those of us who stay until the end of the party can completely relate to the ‘radiant’ filter drinking throws over our world, and perhaps ‘the beyond, the primitive and the void’. Though in days afterward we must confront the fact we may have talked over people, overshared negative thoughts, or put our hand on someone’s leg, we are willing to do it all again for the sake of temporary ‘clarity’.

And, wonderfully, we might have a book next to our bed the next morning and we can read another person’s words and be cracked open by recognition; we can know with certainty we were not the only loser on the dancefloor.

Through both books and alcohol, we share ourselves. Alcohol can bring about sharing and closeness, but also oversharing and repulsion. Oversharing is sharing without the art. A book gives art to the cracking open, to the flowing body of water and all the detritus within it.

Alcohol can affect us all differently. In Alan Hollinghurst’s excellent novel The Swimming-Pool Library, William Beckwith compares his and his boyfriend’s hangovers:

‘As always when I had a bad hangover I felt criminally randy, but Arthur, whom I found still lying on the sitting-room floor, his chin sticky with a dozer’s saliva, spent the morning alternately shitting and vomiting (which was painful for him) and walking very slowly from one item of furniture to another, his lower lip drooping and with a funny look about him which I realised was his equivalent of pallor.’

Some of my favourite books (like those by Virginia Woolf, or Michael Cunningham) aim to capture a sense of transience, though there is always some irony in the attempt (how can you capture the idea that time cannot be captured?). These authors understand the appeal of the sensation Knausgaard describes: of the future not existing, and the present being made radiant. Their works give layers to the present – the past and future exist within it. When the cake came out at my eighteenth birthday party I looked around me, far from sober. In that moment, intense happiness tipped over into melancholy as I realised that never again would I be surrounded by all these people from my present and my childhood; I might never have a night this wonderful again.

Illumination, or at least the sensation of it, can be brought about through a page or through a glass of something opaque. What the axe reveals in the frozen sea can be beautiful, astonishing, overwhelming: an unbalanced entity, a belly laugh mixed with a clench of terror. But transient, too: soon just a shadow again beneath the ice.

In reading and drinking we may be seeking a means of expression, a source of solace, an opening out, or an escape from the future for a little while. We sharpen and wield our own axes. But an axe is not a toy. 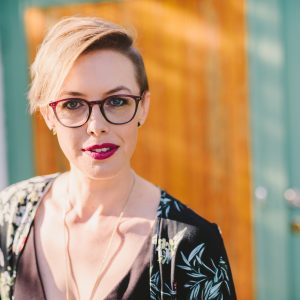