Kristen Stewart Through the Looking-Glass 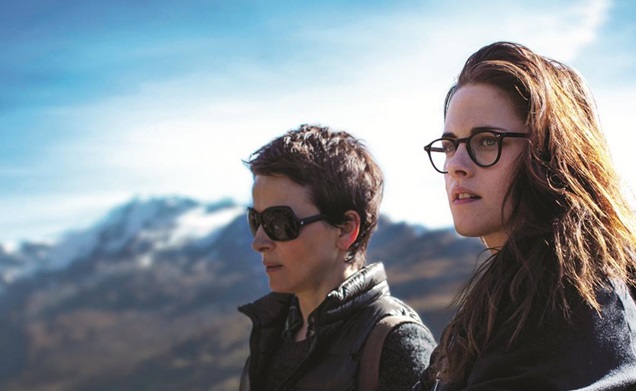 Juliette Binoche and Kristen Stewart in Clouds of Sils Maria

Our experience of the world depends on our position within it. What we perceive shifts, sometimes turbulently, when our point of view does.

In Olivier Assayas’ latest film, Clouds of Sils Maria, Juliette Binoche plays Maria Enders, an actress of international standing. Maria is hiking with her wise, capable personal assistant, Valentine (Kristen Stewart), in the beautiful wilds around the Swiss town of Sils Maria. The two women are running lines for Maloja Snake, a play about a young personal assistant, Sigrid, who seduces her older female boss, Helena, and torments her with love to the point of suicide. Maria was just 18 when she first performed in the role of Sigrid; now in her early forties, she is set to play Helena in a revival of the play. But she feels disconnected from the character of Helena, who she sees as old, weak and inert. Val, offering an alternative view of Maloja Snake’s women, suggests that the problem for Maria is all a matter of perspective. As Maria later understands, Sigrid and Helena are mirrors – Helena is the bitter, frail woman that Sigrid will grow to become. Because Maria once played Sigrid, only she can truly understand this transformation and embody Helena.

Perception is shaken further when the young, scandal-ridden actress who will play Sigrid appears in the film. Jo-Ann Ellis (Chloë Grace Moretz) is a star on the rise, despite a brief stint in rehab and her frequent clashes with the paparazzi – or ‘cockroaches’ as Val calls them (Stewart’s own term). Through Maria and Jo-Ann, two actresses at different stages of their careers, Clouds of Sils Maria provides an intelligent meditation on two seemingly antithetical ideas – the craft of acting, and the circus of celebrity from a distinctly female point of view. And in a shrewd piece of casting, Stewart as Val is on the outside looking in, observing and commenting on these worlds and their intersections.

Since Stewart played Bella Swan, the heroine of Twilight and its sequels, her value as an actor has been enmeshed with a Hollywood franchise marketed at teenage girls that saw her acting ability regularly mocked. As Valentine, however, Stewart is quite brilliant (the role won her the French César for Best Supporting Actress earlier this year), successfully disrupting public ideas of who she is as both an actress and a woman.

It’s more than a little meta: As Val, Stewart watches Jo-Ann experience what she (Stewart, that is) experienced at the height of Twilight mania. ‘KStew’ was hounded mercilessly by the cockroaches while dating her co-star Robert Pattinson, and even more aggressively when details of her affair with Rupert Sanders, the married director of Snow White and the Huntsman (2012), were ‘uncovered’.

Clouds of Sils Maria is full of mirrors and parallels between fictional and real selves. But the cleverest mirror is the one that reflects Stewart’s own life as a young actor, and her ongoing development as an artist. Post-Twilight, Stewart’s career has moved from Hollywood insider – a pseudo-protected space of flashing light bulbs and salacious commentary – to a position on the margins, acting in smaller, independent films where her work and her performances can be her saving grace. 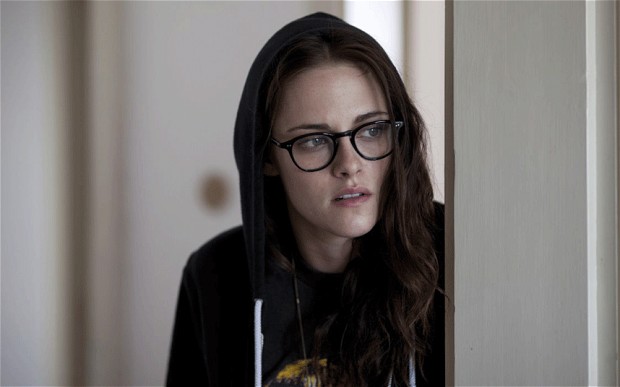 It’s easy to forget that while Stewart is only 25 years old, she has had over 15 years in the business. For a period, she was the highest-paid actress in the world, while simultaneously attempting to publicly navigate the messy path from child star to serious actor. Many others (Macaulay Culkin, Lindsay Lohan) have tried and failed. If Stewart came across as prickly and aloof in interviews, it was a mode of self-preservation. As she explained recently to Harper’s Bazaar, her nerves get the better of her in public: ‘My palms sweat, my knees shake, I don’t think I can stand in my heels, I’m breathing heavily, I feel nauseous.’ Her relationship with Robert Pattinson, low-key and undeclared until it spectacularly fell apart, only made the media’s invasive scrutiny even worse. The entire internet chimed in to speculate, commentate and recapitulate their every move. Stewart was living inside a fish bowl, and the only way to survive was to reinforce the glass.

Assayas, calculatedly or not, gives Stewart a chance to mount a defence of herself, and other actors who take major roles in blockbuster franchises. After watching Jo-Ann play a mutant in a cheesy X-Men rip-off, Val argues with Maria over the merits of fame versus artistic integrity. In the film and Jo-Ann’s performance, Maria sees vapidity and one-dimensionality; Val social commentary and layers. Val likes Jo-Ann because she isn’t ‘antiseptic’ like most actors, because there seems to be no wall between her life and her work, no façade.

Stewart is an actress who has been criticised, maligned even, for an acting style that transmits from set to screen as sullen, adolescent, wooden, blank, fidgety and inelegant. But perhaps she’s an actress concerned with authenticity, and the defining feature of her style is to show us herself by appearing like she’s not acting at all. Her screen persona and her public persona only tell a small part of her story. We need to look beneath the surface – a truth magnified by the revelation of how far-removed Jo-Ann really is from the TMZ persona Maria observes when she Googles her.

Stewart’s strong performance in Clouds of Sils Maria is not a miraculous departure. Even in the midst of being Bella Swan, she was already pulling away, taking risks and trying new things. Despite the criticism, she has grown and evolved as an actor. Films like Welcome to the Rileys (2010), The Runaways (2010), On the Road (2012), Camp X-Ray (2014) and Still Alice (2014) reveal an acting style that is complex and searching, at once chaotic and vulnerable, composed and smart. Recently cast in as-yet untitled new projects by Kelly Reichardt and Woody Allen, Stewart is leaving her vampire past and the public’s derision well behind her.

Like Alice through the looking-glass, Stewart’s Hollywood exodus has landed her in a topsy-turvy world where nothing is as it seems. But that’s just a matter of perspective. By casting Stewart as an assistant with intimate access to the chaos of an established actress’s life, Assayas has built a mirror reflecting Stewart’s own life back to her. Like Lewis Carroll’s looking-glass world, Hollywood is a half-imaginary place, populated by people who are under the illusion that they can control it. But what, inside the looking-glass, is real? At the end of her adventures, Alice wonders whether it was all just a glorious dream. Hopefully Kristen Stewart can look back on this new phase in her career and wonder exactly the same thing.

Clouds of Sils Maria is out now in general release.