A Tale of Two Penises: Double Dick Dude and the invisibility of male bisexuality

I identify as a lesbian. Have you heard of lesbians? You might have seen us featured on Ellen (played by Ellen), or perhaps in your nightmares. We are women of many characteristics, one of which is the general desire not to have sex with men, as well as not usually finding penises sexually attractive (and men will sometimes have those). In my case, this goes so far as to be perplexed as to how anyone finds penises sexually attractive – but that’s beside the point. And yet, for the past year I have found myself fascinated by penises. If I’d been to the races, I would have created a monstrous dick fascinator to wear as a beautiful physical representation of my mental state. But let me be clear, I have not been captivated with all or even many penises. My fascination has solely been aimed at the two penises owned by the man known only as ‘Diphallic Dude’, or more casually ‘DoubleDickDude’ to his friends strangers on the internet.

For those who haven’t heard of Mr DD, he is a 25-year old man who was born with an extremely rare congenital condition called diphallia, where a duplicate penis develops during gestation. Even more rare is the fact that both of his penises are functional. Just over a year ago, Mr DD ddecided to go onto reddit and participate in an ‘Ask Me Anything’ (AMA) session. For a few days, the site could have been renamed reDoubleDickit. He was a man with two penises answering questions, and this is the internet. It almost instantly went viral, proceeding to bring him worldwide attention. To this day, his remains one of the most popular AMAs ever, sitting just above Neil deGrasse Tyson (take that SCIENCE).

Mr DD has been astonishingly open and good-humoured about the situation he is in, not just on reddit, but every other platform he participates in. We quickly learnt that he is bisexual. At the time of his AMA, we also learnt that he was in an open relationship. He has had many (many) interesting and varied sexual exploits that he will go into great detail about if you wish. Oh, and don’t the people wish. He won’t reveal personal details that could identify him (fair enough), and is sick of being asked if he would do porn (no, he won’t, sorry), but everything else is fair game.

Sure, this man’s story is uncommon. He is basically the white dual-horned rhino of the internet. But something else struck me while I was reading. As rare as it is to read the story of a man with two penises, it is almost as rare to read about the experiences of an openly bisexual man. To witness a discussion where so many people are interested in the life of a bisexual man. Bisexual people are rarely given a platform. Both the heterosexual and queer communities often marginalise and ridicule them. They are frequently left out of discussions about issues that affect same-sex attracted people. The few female bisexual characters we see on our screens are too often simply performers for the male gaze. There are even fewer male bisexual characters, and those there are tend to be evil or greedy for power. And yet here was a very frank and very open mainstream discussion involving male bisexuality, the likes of which I hadn’t seen before. 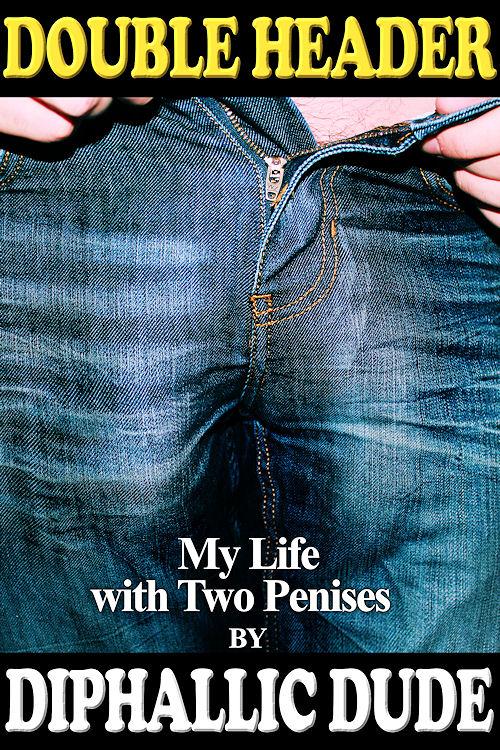 Of course, some people treat Mr DD with the same fascination they would a bearded lady (coincidentally my fall-back career). And yes, some people made awful comments, or awful jokes. This is the internet. But a lot of the people who have engaged with Mr DD’s story, especially on reddit, were simply curious, or envious, or excited. There was undoubtedly a lot of focus on the sex life and sex mechanics (coincidentally the name of my punk band) involved with having two penises. But Mr DD volunteered himself. He created his own narrative, and he is in control of it. He comes across as comfortable and confident, and totally at ease with himself and his body. And now he has written an ebook memoir, titled Double Header: My Life With Two Penises, in order to answer more questions, and go into greater depth about his experiences and sexual encounters. In interviews about the book, he has spoken of how rewarding it is to be able to bring positivity to the world via his unique platform. To receive messages from people struggling with their own differences, and to help them feel better about their situations.

There is no denying that the initial impetus for Mr DD’s popularity means that he is possibly not the bisexual hero the world needs. It is hard to say what, if any, positive impact he has had on how people view bisexuality. However, the same strong message and feeling of positivity about his life, his sexuality, and body acceptance runs through almost everything he says. Perhaps some of this will infiltrate the caveman brains that are only there to make jokes, or to read about double-fucking. I hope so. But I also hope that, sometime in the future, it will become less rare to read about male bisexuality, than to read about a man with two dicks.