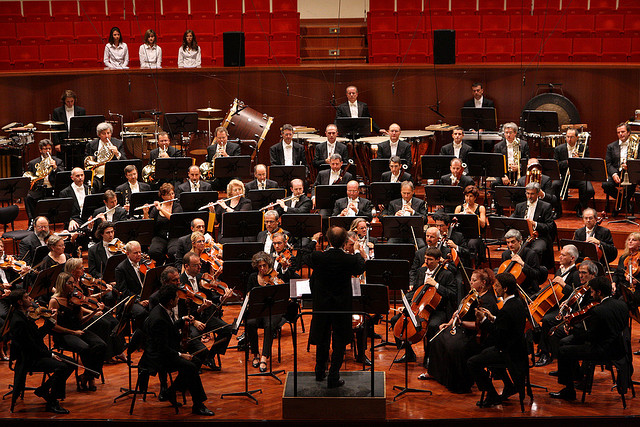 In August, I’d had enough. After receiving yet another press release for a classical music concert, I tweeted an email I’d sent to the publicist asking why there were no women composers in the program. From then it became a regular task I set myself: when I received a music press release, I’d ask #howmanywomencomposers, and post the results on Twitter.

The most frequent number is zero.

As a project, it’s far from rigorous. It is a glance at what finds me when I’m not looking for it: it is press releases in my inbox, events shared on Facebook, concert fliers and festival programs picked up in cafes. It is highly Adelaide-centric. And it is undeniably showing bias towards male composers.

Most people understand that classical music is male-dominated. Interestingly, it was in orchestras that the most famous experiment in gender bias in art occurred. To overcome hiring practices that were recognised as favouring male musicians, in the 1970s and 1980s orchestras transitioned to ‘blind’ auditions. When auditions occurred with a partition between the musician and the panel, orchestras hired more women than ever before.

We have already seen classical music forced to confront gender disparity, which leads me to wonder why these disparities still persist to the point that I – an arts writer, but one who rarely writes about classical music – began to notice them so blatantly? Why has classical music had such a hard time confronting these biases?

I ask #howmanywomencomposers for one simple reason: because it is 2014 and I am tired of old structures feeling like they can get away with ignoring women. Every time I find myself tweeting there are no women in yet another program, I feel like these organisations are completely removed from contemporary conversations. If so little critical thought goes into programming that the lack of women is overlooked, what other factors aren’t being engaged with? And why would I want to engage with this art?

It is telling that none of the all-male programs I have come across have been billed on gender grounds. These aren’t male composers exploring masculinity, and it isn’t ‘a history of music through men’ (although, that’s surely just music). But the one program which does feature solely women composers, After Julia, was programmed as a statement: composer Cat Hope asked seven female composers to create work in response to Julia Gillard and her highlighting of how far women in Australia are from achieving equal representation.

Unsurprisingly, my #howmanywomencomposers tweets rarely generate discussion or response. They’re not designed for engagement, nor are they intended to be read as particularly targeted. It’s primarily a hobby serving my own curiosity. But when I tweeted about the absence of women in the Adelaide Symphony Orchestra’s 2015 program, and received a response from the ASO Twitter account, my heart sunk. The tweet read, ‘Luckily there are some projects in the pipeline that should add a #femaletouch’.

@noplain Thank you! And luckily there are some exciting projects in the pipeline that should add a #femaletouch – we just can’t say yet!

This moment, though, led to an incredibly heartening experience. Over tweets and then emails and then coffee. I met with the ASO marketing team and the director of artistic programming, Simon Lord, and had an engaging and respectful conversation on classical music, contemporary composers, and female composers. Lord shared with me some of his favourite female composers, and we discussed my belief that not only should women be programmed, they should be visible in printed materials, as well: there is more than one way to render woman invisible.

The ASO were prepared to hear my tweets and initiate a conversation, but when I see women under-represented in programming, I can’t help but feel this is a result of lackluster conversation surrounding the art.

The art I want to engage with is keen to place itself in the world as relevant and in conversation with our contemporary lives. It is art that considers gender, but also sexuality, class, race, history, and politics, and questions forms and methods of creating work to place itself firmly in the twenty-first century. Perhaps the most exciting thing to come from my playing with #howmanywomencomposers is that work that engages on this level jumps out at me. But it also leaves me asking: when male dominance of composers is accepted as the status quo, what else is the art is leaving unquestioned?