The Rise of the High-Minded Startup 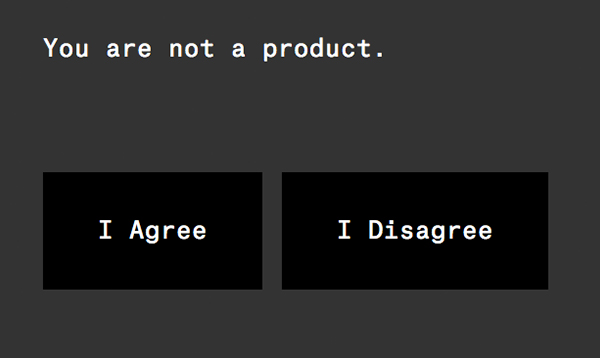 On every page of Ello, the self-described ‘simple, beautiful and ad-free’ social network, is a link to their “manifesto”. ‘Advertisers buy your data so they can show you more ads,’ the document reads. ‘You are the product that’s bought and sold. We believe there is a better way. We believe in audacity. We believe in beauty, simplicity and transparency.’

The manifesto is key to understanding the relative success of Ello, which has managed to sign up hundreds of thousands of users despite offering a wafer-thin feature set that doesn’t even match the original functionality of the Thefacebook hacked together by Mark Zuckerberg a decade ago. Very little about Ello itself is notable: it doesn’t require users to disclose their real names, a policy Facebook briefly and contentiously implemented recently, but neither do Twitter or Tumblr, or most other social media services. The manifesto, then, is the only real differentiator between Ello and its competitors.

A manifesto like Ello’s – which grasps desperately at profundity but collapses into trite meaninglessness (does anyone not believe in audacity or beauty or simplicity?) – allows the startup to benefit from associations with past manifesto-based socio-political-artistic movements, and encourages new users to identify themselves as revolutionaries. The fact that Ello’s manifesto is, at its core, simply a collection of vague truisms (a social network should be ‘a place to connect, create and celebrate life’) only makes it more powerful, as it allows Ello users to believe they are taking a stand without worrying they might be required to stand for anything in particular. Following in a long tradition, the Ello manifesto draws attention to a great injustice (social networks make use of customer data to display targeted advertisements), but stops short of detailing how, exactly, any new, more just régime would avoid eventually corrupting itself. Indeed, were Ello to eventually displace Facebook (which seems unlikely), the investment they have already received nearly guarantees they would need to compromise on their hazy, inspirational, not-quite-promises very quickly. Investors have a habit of caring very little about morality and very much about cashing out as quickly as possible.

The manifesto-based startup represents a shift in how we understand online services. Where, previously, startups won and lost based – at least in part – on the strength of their so-called elevator pitches (‘What’s the problem? What’s the solution, and how are you going to execute it better than your competitors?’), the new crop of manifesto-based startups seem to be emerging as nascent lifestyle brands, their product or service itself existing in order to justify the worldview which in turn justifies it. The startup Holstee is perhaps the purest example of this trend: the startup appears to exist primarily to sell posters and cards and decals and prints of its own manifesto, creating an endless uroboric loop in which the user/buyer is encouraged to, buy the manifesto in order to ‘Live your dream and share your passion’.

In 2014, it is no longer possible for new startups to compete straightforwardly with established players in most fields; the lead of the incumbents is too great. A carefully-constructed manifesto, however, seems to offer a sly way around this need to truly compete, allowing founders to obscure a new service’s crude or derivative feature set behind an inspirational, jargon-filled call-to-arms. No new mobile photo-sharing startup could possibly compete with Instagram, for example, which has a polished user interface, unlimited storage, massive userbase, and stable servers. This is why, when VSCO launched their Instagram competitor in February, they did so in the form of a tautological manifesto in which they suggested that they ‘rebel’ against the notion that ‘an artist’s creative process and purpose often are lost among the belief that clout within social networks equals quality work’. Exactly what this means isn’t particularly clear, which might be the point.

Some startup manifestos are better than others. Last year, when MacDowell Writing Fellow Craig Mod launched his narrative-sharing service Hi, he did so by way of a 2,800 word manifesto in which he outlined a set of beliefs about ‘how digital creative tools could and should function’. Mod’s manifesto included the notion that we need ‘a system encouraging the habit of seeing’. The entire essay is well worth reading – Mod’s ideas of ‘creativity zones’ and ‘layered levels of publishing’ may initially seem hazy, but he does a good job of attempting to explain what he means via references to other works.

The Ello manifesto, meanwhile, is probably the worst of them all: overly broad, provocative, and deliberately slippery. The Ello team suggests they ‘believe that the people who make things and the people who use them should be in partnership’, which raises significant questions as to what this kind of ‘partnership’ might look like and how it might operate. The Ello service as it currently exists does not offer many clues, which is probably why the manifesto is presented front and centre: the service itself is really just vaporware, the manifesto encouraging us to sketch out an imagined version of Ello that might exist one day, in the far future, once we have transferred our loyalty from Facebook and granted the Ello team ownership of all our data. At the same time, the structure of the manifesto ensures that Ello will never be held responsible if plans change. After all, in Ello’s decidely less utopian privacy policy, there is the proviso that, ‘Ello does not have any affiliated companies right now. But if we do in the future, we may share some information with them.’

In a way, the rise of the manifesto-based startup can probably be explained by Silicon Valley’s current obsession with the ‘Myth of Magical Futures’. Manifesto-based startups like Ello loudly declare that the future will be safer, simpler, more secure, more equal, more beautiful, or more audacious than the present. These declarations are convincing, largely because we so desperately want to be convinced, but they carry no weight: if these startups actually knew how to construct these futures, we’d already be there.