Patrons and gamemakers in the shadow of Gamergate 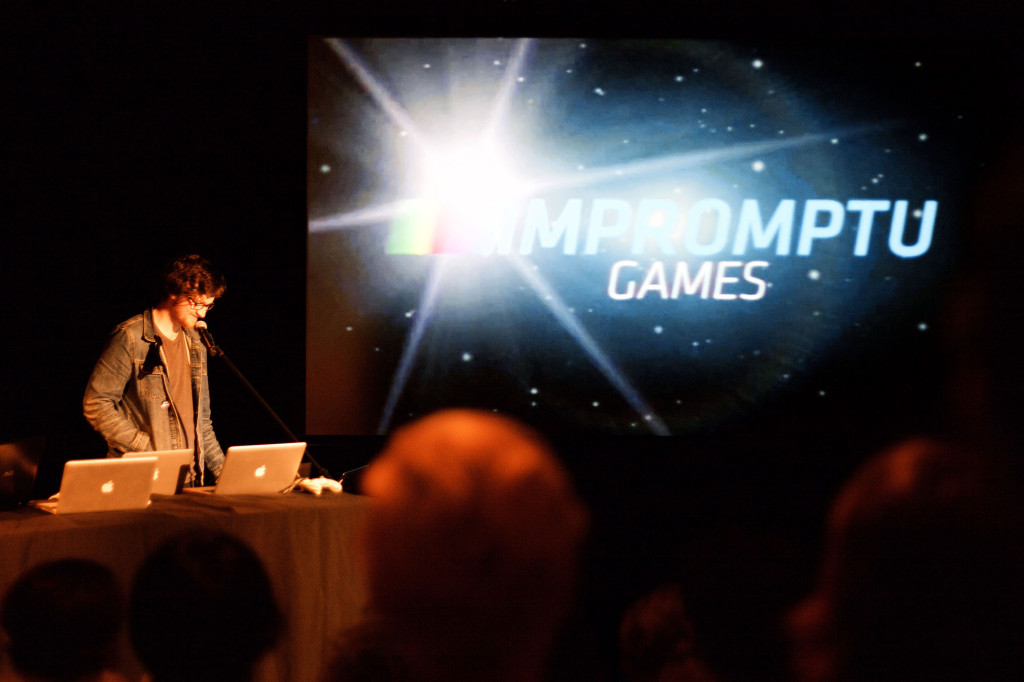 After showing off two incredible videogames-in-progress – one, Magenta Sunset, an ‘immersive, atmospheric first-person adventure game with a focus on minute interactivity’, the other Spacething, a procedurally-generated spaceship renovation game – Joe Wintergreen stood on stage at the Freeplay Parallels showcase event, looking sheepish.

‘Um, so… if you know where I can get money… let me know!’ he said, wringing his hands, before directing audience members to his Patreon account. The crowd, composed mostly of other gamemakers or gaming journos, laughed, but not unkindly. Over the past few years, the mobile games market has collapsed into a mess of mostly ‘free-to-play’ garbage. As a result, price points for quiet and thoughtful indie ‘little games’ on other platforms are being driven close to zero. If you can’t laugh at the way things have shifted, what else can you do?

Wintergreen’s plug for his Patreon account was interesting. Wintergreen has existing, finished games to sell, but he seems more interested in looking for patrons to support the creation of the games he hasn’t yet completed. Unlike Kickstarter, Patreon, an online platform enabling fans to provide ongoing monetary support to other users, isn’t necessarily tied to specific artistic output. Wintergreen argues this makes it a ‘way to help take some pressure off, and go back to being motivated by making cool things rather than fear of poverty’.

Unfortunately, Patreon’s model of ‘patreonomics’ is one of the targets of the ongoing Gamergate crusade. According to some Gamergaters, when a games journalist supports an indie games creator through a patronage website they necessarily create a conflict of interest so great as to constitute corruption. Already, at least one major games publication has taken measures to enforce a strict no-patronage policy.

There is a lot to unpack about Gamergate, and a great deal more that isn’t at all worth taking seriously, but what the patronage pseudo-controversy has drawn attention to is the fact that there are potentially huge issues with moving to a model of monetary transactions in which our payments are increasingly networked and ‘social’. There should be nothing at all wrong with a cultural critic monetarily supporting artistic creation – in fact, one would probably expect a substantial slice of a critic’s (generally meager) income to feed right back into the industry they love so dearly. The idea of a music critic visiting a record store and combing through the racks for vinyl should not rankle; neither should the idea of a book reviewer reading, for leisure, titles that haven’t expressly been pushed to them by publishers. Money can, and has, changed hands between critics and creators – because both produce work that the other wants to pay for.

When person-to-person monetary exchanges are made public and easily-accessible, however, straightforward transactions seem to take on added weight – especially when these exchanges are for cultural goods yet to be produced. With services like Kickstarter, Pozible, Patreon, and Indiegogo pushing for users to publicise their transactions, it becomes possible for committed detractors to begin compiling reports on where and to whom an individual’s earnings are flowing. The only old-school model we have to understand these kinds of public money flows is that of campaign financing, and as a result every payment made through a patronage or crowdfunding website can be willfully misrepresented (or accidentally misinterpreted) as an example of bribery or some deeper collusion. For those even more committed to tracing donations, complex patterns of public transactions between multiple parties can be used to build dense webs in which it appears as though everybody is paying everybody else off. Of course, these supposed ‘conspiracy webs’ simply represent how the economy naturally works. It makes sense for money to tend to flow between those with preexisting relationships, providing the transactions themselves are legitimate – which they almost always are. (Real corruption does exist, of course, but tends to be better hidden).

It seems as though some startups are pushing a philosophy in which the anonymity of cash transfers (and privacy of electronic funds transfers) is seen as a flaw to be rectified by ‘bolting on social’. Crowdfunding and patronage services push for public contributions in order to leverage ‘social proof’ – the idea being that you’ll be more likely to contribute if you recognise your peers are also doing so – but the motivation for other startups exploring social payments is less explicable. Venmo, for example, is a social network in which payments between users appear on a public feed of status updates. I can see the global feed now: in between the usual updates (payments for Uber fees, rent, and electricity bills), I see that one minute ago Meg W paid Francisca J ‘an extra dollar for being sympathetic while I complained about being hungover’, while one second Emma R paid Wynne L for ‘You know ;-P’.

I can see why Venmo is gaining the traction it is: there’s something satisfying about making one’s payments public – a transfer of real currency, after all, can say more about the strength of a relationship than a virtual ‘like’ or ‘favourite’. Eventually, Venmo may even trade on a pressure to continuously transfer real money between friends in order to cement allegiances. Gamergate, however, reveals something we all need to take into deep consideration: the more data we make public, the easier it is for detractors with a vendetta to construct a case against us. In this way, Venmo is potentially even more dangerous than Patreon or Kickstarter, in that the only context for each financial transfer resides solely in the status update itself. Emma R and Wynne L alone can explain what ‘You know ;-P’ means, but we are free make our own assumptions, perhaps surmising that the transfer covered drugs or sex or bribery. Of course, Emma R and Wynne L can rest easy that their transaction will almost certainly never be referenced again outside of this article, but who can say for sure? The mob turns quickly. One can easily imagine a similar public transfer making headlines sometime in the near future.

The fact that we are moving toward a model in which independent creators are forced to rely on public monetary contributions from fans is not necessarily an issue – patreonomics might just save indie developers yet. But the Gamergate fallout reveals what happens when transactions are made public: buyers themselves can become targets, and be held liable simply for wanting to support the culture that supports them.