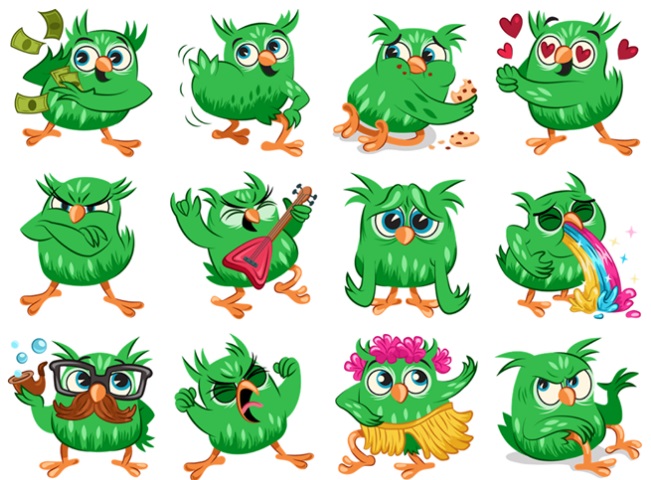 On the Facebook Newsfeed, it’s now possible to click a tiny smiley face inside almost any textbox to bring up a series of thumbnail images: an alligator bawling into a tissue, say, or a whistling fox dropping a turd, or a green owl vomiting rainbows. These “stickers” aren’t new – they’ve been available in FB Messenger for over a year, and almost every IM client now has an equivalent functionality – but this is the first time the stock graphics have been made available for use on Facebook proper.

In one sense, virtual stickers have exploded in popularity because they represent an expansion of communicative possibility: whereas once the choice was between “liking/faving/hearting” something, leaving a comment, or ignoring it completely, stickers facilitate a kind of Hallmark card model of caring, requiring a low – but not too low – emotional cost. We can express ourselves with reference to a huge, but not limitless, set of go-to images. Emojis exist in this space, too, but as fresh emojis are introduced only sporadically, emojis tend to rapidly lose their novelty with reuse: the thumbs-up emoji still conveys “good job” the thousandth time it is employed, but feels pretty dull and utilitarian when compared to, say, a sticker of Sly Stallone smoking a cigar in front of a wall of flames apparently ready to give a fist-bump. Stickers are fun because, while you’ll probably see a lot of the same images reused (familiarity is part of the appeal), there’s always the possibility somebody might have access to a brand new set you haven’t used before.

By encouraging users to dip into sets of canned visual responses instead of leaving text-based comments, Facebook and other tech companies have done something clever: they can more easily a track engagement with a piece of content moving through their network if they monitor which stickers users apply to it. There are three different stickers of Oakley the Owl looking fed up, for example, and it’s likely that Facebook will end up making a decision about the kind of person you are based on which of these images you opt for and when. Eventually, providing the sticker fad doesn’t end as abruptly as it began, our use of stickers may end up saying more about us (to tech companies) than the content we like or the comments we leave. “Liking”, after all, is binary (either you like something or you don’t), and text-based comments are still much too hard for computers to properly break apart and decipher. Stickers, on the other hand, provide users with a machine-readable method of emotional expression, while still allowing them to feel they’re communicating naturally.

None of this is really very worrying, though – trying to figure us out is Facebook’s bread and butter. What’s more worrisome is that the introduction of stickers across Facebook seems to represent the total collapse of the wall delineating advertising from real personal content. Most stickers in Facebook’s Sticker Store are simply advertisements, very loosely disguised. The “Language of Soccer” sticker set, for example, features illustrations of players and soccer balls, all emblazoned with tiny Nike swooshes, the Cut the Rope set features images of the game’s Om Nom character making strange faces, and Sly Stallone appears in sticker form only because Lionsgate have paid to use Facebook stickers to promote The Expendables 3. With stickers, users are encouraged to inadvertently communicate with others in the form of tiny, semi-subliminal graphical advertisements for multinational entertainment companies. Several months ago, I only realised Muppets Most Wanted existed at all because my incoming Facebook messages were suddenly full of images of Fozzie Bear eating a sandwich as friends tested out the Muppets sticker set.

It’s sometimes not clear exactly how seriously we should take any of this. Does it really matter if Facebook encourages us to express ourselves in the form of graphics created to get us craving shoes or Lego construction sets? If it does matter, it matters because we feel as though we are being manipulated and made to shill products when we just want to have personal conversations. It was only when I started writing this column that I really gave any thought to the fact that almost all of my Facebook message threads now carry these kinds of strange advertisements: one friend uses the Adventure Time sticker set, another the Candy Crush set, another the Nike Football set, each of them essentially sending me advertisements every time they want to convey any kind of emotional message or response.

Perhaps stickers will fade out fast, like those dinky $1 Facebook pixel image gifts you used to see littered around the social network in 2007 (somebody gave me a teddy bear!), but I’m not sure they will. A shared and expansive (and often slightly wacky) emotive visual shorthand is actually fairly valuable. It would just be great if, going forward, we didn’t tie our digital emotional signifiers to ads for sweatshop sneakers.