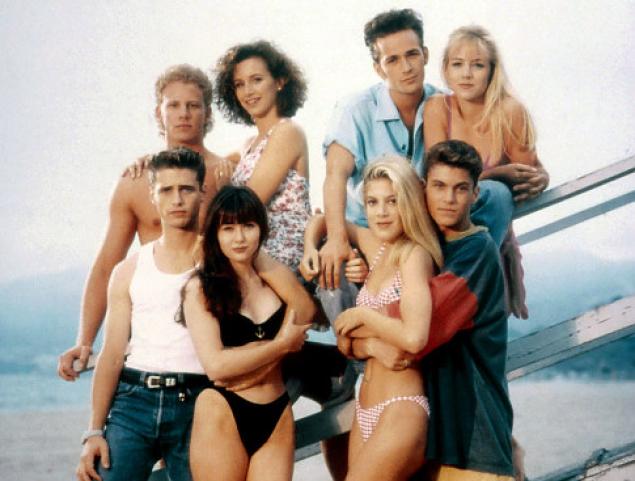 I was a sickly child: every school holidays I’d get tonsillitis, every school fete I’d catch a 24-hour stomach bug, any time someone sneezed in my direction I’d end up with ‘slap cheek syndrome’ or some other ailment. I can’t believe I never had head lice.

The only upside to getting sick was the many afternoons I spent curled up on the couch at home, watching daytime TV. I still remember being scared shitless but utterly captivated by Marlena’s devil possession on Days of Our Lives, and loving Ricki Lake in all its flair. I inhaled the drama of pre-recorded episodes of Beverley Hills 90210 while playing with my Brandon and Dylan sticker collection (interspersed with sporadic vomiting).

I’m a lot older now, but not much has changed (other than no longer having a 90210 sticker collection, which sucks). I’m still prone to constant illness, and most recently I’ve been struck down with the post-festival lurgy – that weird mixture of smushed together viruses that leaves you feeling like your only regret is not having Boneitis.

As an adult I still convalesce with television, and I know I’m not alone. I spoke to a few people about this, and many agreed with me: enforced bed rest is guilt-free TV time. It’s a chance to catch up on your favourite shows, or the long lists of ‘must-watch’ TV everyone has been talking about but which you haven’t yet gotten around to.

Personally, I never feel guilty about watching television, but I do feel stupid about some of the sick-person viewing choices I’ve made in the past. Witnessing daytime soap character Marlena hover above her bed terrified me as an ailing child, but I still think re-watching Buffy a few years ago was my worst ever decision. Nursing my very own hell mouth (equipped with an influenza-white stained tongue) and a temperature of 40°C, my fever dreams were off the charts. The ingenious terrors that populate the Whedonverse did not help my already bogus illin’ imagination. Re-experiencing the silent episode ‘Hush’ was particularly terrifying. Its incredible score and frightening baddies The Gentlemen made for some seriously anxious – not restful – naptime.

Making a similarly foolish decision, a friend of mine recently sweated out a sickness stint watching True Detective, which (unsurprisingly to the clear headed among us) left her feeling emotionally fragile, but also angry because she’d missed most of show’s nuances.

This week, I took to binge-watching the latest season of Orange is the New Black and had a similar experience. Tonally, OITNB is a good show to drift in and out of. Unfortunately, because I spent roughly 43% of the time sleeping, my understanding of what happened across 12 episodes is: ‘Women and uniforms and phone calls and a food fight and at least three killer 90s sing-alongs. Oh and prison!’

So watching something that you really want to invest time in, and be up to date with, perhaps isn’t a good choice for sick-person viewing either. The best sick-person TV is light comedy: I head back to The Simpsons or How I Met Your Mother, where the voices and characters feel like friends and canned laughter takes me to a safe place. Or teen TV (forever) like The O.C.,where everything (except for Chino) is sunny and clean and has Seth Cohen. (NB: With flu season approaching, this is where I’d seriously recommend getting the likes of Netflix, folks – it’s like Menulog for the mind.)

Other tips from my well-versed sick-person viewing experience: avoid hospital dramas, unless, like Scrubs, they double as comedy. If you’re prone to fits of feverish hypochondria, you’ll probably think you’re actually dying from whatever the girl on All Saints is being treated for (and no one needs to fret that they have the flu and oral gonorrhoea). Period dramas are good, but maybe stray from the excessive trauma of the recent season of Downton Abbey,and hit up some Colin Firth/Mr Darcy comfort – BBC adaptations are pretty much the hot water bottle of the small screen. Reality TV can also be pleasant, but don’t upset your stomach further or frighten your appetite away forever by watching high-pressure cooking shows; these are not the recipe for recovery. Or you can just revert to my childhood preference: terrible daytime broadcast free-to-air television. Its ability to soothe you into slumber via sheer inanity will have you rested up, recovered and back to your real life in no time.