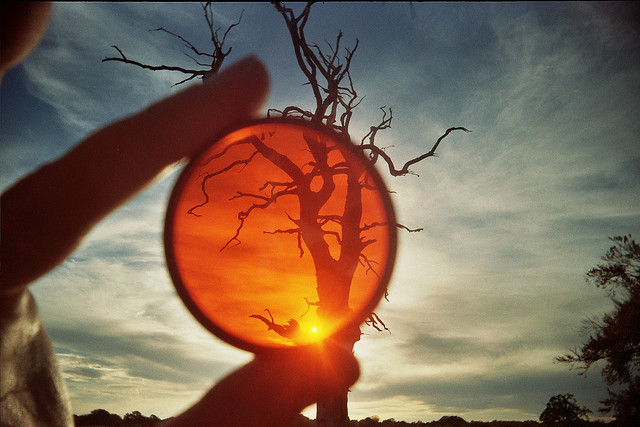 Over at crowdfunding platform Indiegogo, a group of Edinburgh-based hipsters recently announced their intention to produce a range of amber-tinted Wayfarer-knockoffs. So far, so uninspired. The gimmick? The tint of the lenses is apparently the result of ‘endless research’ into the workings of the most popular Instagram filters. The response to the glasses has been phenomenal: as of late May, the team behind Tens, the ‘Real Life Photo Filter’ sunglasses, have already raised over £300,000 from 7000 backers.

Would Baudrillard have forked out for a pair of Tens? At the very least, he would have made the point that crafting a pair of lenses that replicate the look of an over-processed digital photograph represents the absolute triumph of the hyperreal. Because our colour-graded photos have become more authentic to us than the world itself, Baudrillard might have noted, it was inevitable that we’d eventually be drawn toward glasses that distort the nature of reality so that it better comports with the pictures we share on our touchscreens.

By now, of course, the assumption is that every digital photograph has been post-processed unless proven otherwise, and the way we decide to filter our pictures is an act of identity construction. We are tied, in some strange and unspoken way, to those who process their photos as we do, because their images are set in the same alternate reality as our own, and whether you’re a Walden person or a Sutro enthusiast can sometimes matter a great deal more than whatever it is you shoot. A photograph’s subject matter is fleeting, after all, but the algorithm that alters its curve profiles is forever. While previously we altered ourselves (via, say, a well-placed piercing, well-tailored suit, well-applied makeup, or well-ripped Guns ‘N Roses t-shirt) to make a statement about our taste or worldview, now we have the tools to, at least in some sense, alter the world itself.

Considering how much power we have to process our pictures, and how arbitrary our filter preferences really are, it seems likely we’re now fated to cycle through photo processing trends for ever and ever. If 2011 was marked by the saturated greens and yellows of Instagram’s Lo-Fi filter, 2014 might be remembered as a faded and subtly hue-shifted year, as on point photographers move en masse toward VSCO’s consumer film emulation filters. Already, too, communities are emerging in which smartphoneographers are ghettoising based entirely on post-processing preferences. VSCO GRID, for example, is a photo sharing site with a single point of difference: you can only upload and view pictures that have been run through VSCO’s filters.

Our infatuation with one-tap DIY post-processing doesn’t mean we’re necessarily entirely comfortable with the democratisation of photo editing. It’s been over three years since Instagram launched, and we’re still not sure whether processing a photograph might be considered akin to doctoring a memory. Recently, services have emerged allowing you to spot ‘filter fakers’ (those who tag their pictures with #nofilter, but proceed to post-process anyway), and there are professional photographers who continue to argue that, ‘Every time a news organisation uses a Hipstamatic or Instagram-style picture in a news report, they are cheating us all.’ (This doesn’t really hold up: virtually all journalistic images in newspapers are carefully colour-graded, and almost all the 35mm photos that sit in our shoeboxes were tweaked by spotty teenagers working minimum wage at Rabbit Photo).

In Vernor Vinge’s Rainbows End, characters wear contacts that overlay the world with custom computer graphics, and in the ‘real world’ (whatever that means), Google Glass offers the potential for a similar style of reality augmentation. The Tens sunglasses are comparatively primitive, as are our Instagram and VSCO filters, but perhaps this is what makes them so compelling. We don’t necessarily want to exist in a virtual reality world – we simply want to be able to tweak what already exists to make it our own: maybe deepen the sky, cut out the shadows, vignette the corners.